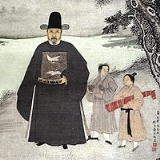 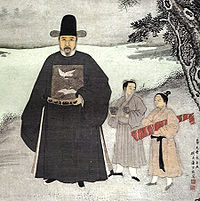 A mandarin was a bureaucrat
Bureaucrat
A bureaucrat is a member of a bureaucracy and can comprise the administration of any organization of any size, though the term usually connotes someone within an institution of a government or corporation...
in imperial China, and also in the monarchist days of Vietnam
History of Vietnam
The history of Vietnam covers a period of more than 2,700 years. By far Vietnam's most important historical international relationship has been with China. Vietnam's prehistory includes a legend about a kingdom known as Van Lang that included what is now China's Guangxi Autonomous Region and...
where the system of Imperial examinations and scholar-bureaucrats
Scholar-bureaucrats
Scholar-officials or Scholar-bureaucrats were civil servants appointed by the emperor of China to perform day-to-day governance from the Sui Dynasty to the end of the Qing Dynasty in 1912, China's last imperial dynasty. These officials mostly came from the well-educated men known as the...
was adopted under Chinese influence.


History and use of the term

The English
English language
English is a West Germanic language that arose in the Anglo-Saxon kingdoms of England and spread into what was to become south-east Scotland under the influence of the Anglian medieval kingdom of Northumbria...
term comes from the Portuguese
Portuguese language
Portuguese is a Romance language that arose in the medieval Kingdom of Galicia, nowadays Galicia and Northern Portugal. The southern part of the Kingdom of Galicia became independent as the County of Portugal in 1095...
mandarim (early spelling, mandarin). The Portuguese word is amply attested already in one of the earliest Portuguese reports about China: letters from the imprisoned survivors of the Tomé Pires
Tomé Pires
Tomé Pires was an apothecary from Lisbon who spent 1512 to 1515 in Malacca immediately after the Portuguese conquest, at a time when Europeans were only first arriving in South East Asia...
' embassy, which were most likely written in 1524, and in Castanheda
Fernão Lopes de Castanheda
Fernão Lopes de Castanheda was a Portuguese historian in the early Renaissance.His "History of the discovery and conquest of India", full of geographic and ethnographic objective information, was widely translated throughout Europe.- Life :Castanheda was the natural son of a royal officer, who...
's História do descobrimento e conquista da Índia pelos portugueses Its usage among the Portuguese is also attested by Matteo Ricci
Matteo Ricci
Matteo Ricci, SJ was an Italian Jesuit priest, and one of the founding figures of the Jesuit China Mission, as it existed in the 17th-18th centuries. His current title is Servant of God....
, who entered the mainland China from the Portuguese Macau
Macau
Macau , also spelled Macao , is, along with Hong Kong, one of the two special administrative regions of the People's Republic of China...
in the late 16th century.

The Portuguese word was thought by many to be related to mandador ("one who commands") and mandar ("to command"), from Latin "mandare".
Modern dictionaries, however, agree that it was in fact borrowed by Portuguese from the Malay
Malay language
Malay is a major language of the Austronesian family. It is the official language of Malaysia , Indonesia , Brunei and Singapore...
ˈməntəri, which ultimately came from the Sanskrit
Sanskrit
Sanskrit , is a historical Indo-Aryan language and the primary liturgical language of Hinduism, Jainism and Buddhism.Buddhism: besides Pali, see Buddhist Hybrid Sanskrit Today, it is listed as one of the 22 scheduled languages of India and is an official language of the state of Uttarakhand...
mantri
Mantri
Mantri is a word of Sanskrit origin , used in Asian cultures with a Hindu tradition . It is used for a variety of public offices, from fairly humble to ministerial in rank. The term also forms part of a number of compounds...
n (Devanagari
Devanagari
Devanagari |deva]]" and "nāgarī" ), also called Nagari , is an abugida alphabet of India and Nepal...
: मंत्री) (meaning counselor or minister – etymologically
Etymology
Etymology is the study of the history of words, their origins, and how their form and meaning have changed over time.For languages with a long written history, etymologists make use of texts in these languages and texts about the languages to gather knowledge about how words were used during...
linked to "Mantra
Mantra
A mantra is a sound, syllable, word, or group of words that is considered capable of "creating transformation"...
").
According to Malaysian Royal Professor Ungku Abdul Aziz
Ungku Abdul Aziz
Ungku Abdul Aziz bin Ungku Abdul Hamid was the Vice-Chancellor of the University of Malaya from 1968 to 1988. He was awarded the title of Professor Diraja in 1978...
, the term had its origin when the Portuguese living in Malacca during the Malacca Sultanate
Malacca Sultanate
Established by the Malay ruler Parameswara, the Sultanate of Malacca was first a Hindu kingdom in 1402 and later became Muslim following the marriage of the princess of Pasai in 1409. Centered in the modern town of Malacca, the sultanate bordered the Ayutthaya Kingdom of Siam in the north to...
wanted to meet with the higher officials in China, and used the term "menteri", but with an added "n" due to their poor grasp of the language, to refer to higher officials.

In the 16th century, before the term mandarin became widespread in the European languages, the word Loutea (with various spelling variations) was often used in Europeans' travel reports to refer to Chinese scholar-officials. It is frequently used e.g. in Galeote Pereira
Galeote Pereira
Galeote Pereira was a 16th century Portuguese soldier of fortune who has left us one of the earliest accounts by a westerner of life in China's Ming Dynasty, indeed the first detailed observation of that civilisation by a non-cleric since that of Marco Polo....
's account of his experiences in China in 1548–1553, which was published in Europe in 1565, or (as Louthia) in Gaspar da Cruz
Gaspar da Cruz
Gaspar da Cruz was a Portuguese Dominican friar born in Évora, who traveled to Asia and wrote one of the first detailed European accounts about China.-Biography:Gaspar da Cruz was admitted to the Order of Preachers convent of Azeitão...
' Treatise of China (1569). As C.R. Boxer explains, the word comes from the Chinese 老爷 (Mandarin Pinyin: lǎoye; Amoy dialect: ló-tia; Quanzhou
Quanzhou
Quanzhou is a prefecture-level city in Fujian province, People's Republic of China. It borders all other prefecture-level cities in Fujian but two and faces the Taiwan Strait...
dialect: lāu-tia), which was commonly used by people in China to address officials. This is also the main term used to refer to the scholar-officials in Juan González de Mendoza
Juan González de Mendoza
Juan González de Mendoza was the author of the first Western history of China to publish Chinese characters for Western delectation. Published by him in 1586, Historia de las cosas más notables, ritos y costumbres del gran reyno de la China is an account of observations several Spanish travelers...
's History of the great and mighty kingdom of China and the situation thereof (1585), which heavily drew (directly or indirectly) on Pereira's report and Gaspar da Cruz' book, and which was the Europeans' standard reference on China in the late 16th century.

In the West, the term mandarin is associated with the concept of the scholar-official
Scholar-bureaucrats
Scholar-officials or Scholar-bureaucrats were civil servants appointed by the emperor of China to perform day-to-day governance from the Sui Dynasty to the end of the Qing Dynasty in 1912, China's last imperial dynasty. These officials mostly came from the well-educated men known as the...
, who immersed himself in poetry, literature, and Confucian learning in addition to performing civil service
Civil service
The term civil service has two distinct meanings:* A branch of governmental service in which individuals are employed on the basis of professional merit as proven by competitive examinations....
duties.

The term "Mandarin" is also used to refer to the standard northern spoken variety of Chinese
Chinese language
The Chinese language is a language or language family consisting of varieties which are mutually intelligible to varying degrees. Originally the indigenous languages spoken by the Han Chinese in China, it forms one of the branches of Sino-Tibetan family of languages...
because it was the language used among officials during the Ming
Ming Dynasty
The Ming Dynasty, also Empire of the Great Ming, was the ruling dynasty of China from 1368 to 1644, following the collapse of the Mongol-led Yuan Dynasty. The Ming, "one of the greatest eras of orderly government and social stability in human history", was the last dynasty in China ruled by ethnic...
and Qing
Qing Dynasty
The Qing Dynasty was the last dynasty of China, ruling from 1644 to 1912 with a brief, abortive restoration in 1917. It was preceded by the Ming Dynasty and followed by the Republic of China....
dynasties. It can be thought as the translation of the Chinese name Guanhua ("the language of the officials") for this speech standard, which was current already in the Ming Dynasty.

China has had civil servants since at least the Zhou Dynasty
Zhou Dynasty
The Zhou Dynasty was a Chinese dynasty that followed the Shang Dynasty and preceded the Qin Dynasty. Although the Zhou Dynasty lasted longer than any other dynasty in Chinese history, the actual political and military control of China by the Ji family lasted only until 771 BC, a period known as...
. However most high ranking positions were filled by relatives of the sovereign and the nobility
Chinese nobility
Chinese sovereignty and peerage, the nobility of China, were an important feature of traditional social and political organization of Imperial China. While the concepts of hereditary sovereign and peerage titles and noble families were featured as early as the semi-mythical, early historical...
. It was not until the Tang Dynasty
Tang Dynasty
The Tang Dynasty was an imperial dynasty of China preceded by the Sui Dynasty and followed by the Five Dynasties and Ten Kingdoms Period. It was founded by the Li family, who seized power during the decline and collapse of the Sui Empire...
when the final form of the mandarin was completed with the replacement of the nine-rank system
Nine-rank system
The nine rank system , or much less commonly nine grade controller system, was a civil service nomination system during the Three Kingdoms and the Southern and Northern Dynasties in China...
. The mandarins were the founders and core of the Chinese gentry
Gentry (China)
As used for imperial China, landed gentry does not correspond to any term in Chinese. One standard work remarks that under the Ming dynasty, called shenshi or shenjin, meaning variously degree-holders, literati, scholar-bureaucrats or officials, they are loosely known in English as the Chinese...
. The mandarins were replaced with a modern civil service after the fall of the Qing Dynasty
Qing Dynasty
The Qing Dynasty was the last dynasty of China, ruling from 1644 to 1912 with a brief, abortive restoration in 1917. It was preceded by the Ming Dynasty and followed by the Republic of China....
.

Vietnam
Vietnam
Vietnam – sometimes spelled Viet Nam , officially the Socialist Republic of Vietnam – is the easternmost country on the Indochina Peninsula in Southeast Asia. It is bordered by China to the north, Laos to the northwest, Cambodia to the southwest, and the South China Sea –...
, after becoming free of Chinese rule and setting up its own independent monarchy, emulated the Chinese system of mandarins in its civil service.

In modern English
English language
English is a West Germanic language that arose in the Anglo-Saxon kingdoms of England and spread into what was to become south-east Scotland under the influence of the Anglian medieval kingdom of Northumbria...
, mandarin is also used to refer to any (though usually a senior) civil servant, often in a satirical context, and particularly in the United Kingdom
United Kingdom
The United Kingdom of Great Britain and Northern IrelandIn the United Kingdom and Dependencies, other languages have been officially recognised as legitimate autochthonous languages under the European Charter for Regional or Minority Languages...
and Commonwealth countries
Commonwealth of Nations
The Commonwealth of Nations, normally referred to as the Commonwealth and formerly known as the British Commonwealth, is an intergovernmental organisation of fifty-four independent member states...
.