A podium is a platform that is used to raise something to a short distance above its surroundings. It derives from the Greek
Greek language
Greek is an independent branch of the Indo-European family of languages. Native to the southern Balkans, it has the longest documented history of any Indo-European language, spanning 34 centuries of written records. Its writing system has been the Greek alphabet for the majority of its history;...
πόδι (foot) In architecture
Architecture
Architecture is both the process and product of planning, designing and construction. Architectural works, in the material form of buildings, are often perceived as cultural and political symbols and as works of art...
a building can rest on a large podium. Podia can also be used to raise people, for instance the conductor
Conducting
Conducting is the art of directing a musical performance by way of visible gestures. The primary duties of the conductor are to unify performers, set the tempo, execute clear preparations and beats, and to listen critically and shape the sound of the ensemble...
of an orchestra
Orchestra
An orchestra is a sizable instrumental ensemble that contains sections of string, brass, woodwind, and percussion instruments. The term orchestra derives from the Greek ορχήστρα, the name for the area in front of an ancient Greek stage reserved for the Greek chorus...
stands on a podium as do many public speakers
Public speaking
Public speaking is the process of speaking to a group of people in a structured, deliberate manner intended to inform, influence, or entertain the listeners...
. Podium has also come to mean the object a speaker stands behind and sets papers or books upon even when it is at floor level, though the correct term for that item is lectern
Lectern
A lectern is a reading desk with a slanted top, usually placed on a stand or affixed to some other form of support, on which documents or books are placed as support for reading aloud, as in a scripture reading, lecture, or sermon...
. The terms are not identical; one typically stands on a podium, but one typically stands behind a lectern.

In sports, a type of podium is used to honor the top three competitors in events such as the Olympics
Olympic Games
The Olympic Games is a major international event featuring summer and winter sports, in which thousands of athletes participate in a variety of competitions. The Olympic Games have come to be regarded as the world’s foremost sports competition where more than 200 nations participate...
. In the Olympics a three level podium is used, the highest level in the centre holds the gold medalist, to their right is a somewhat lower one for the silver medalist. To the left of the gold medalist is an even lower platform for the bronze medalist. In many sports, results in the top three of a competition are often referred to as podiums, or podium finishes. In some individual sports, "podiums" is an official statistic
Statistics
Statistics is the study of the collection, organization, analysis, and interpretation of data. It deals with all aspects of this, including the planning of data collection in terms of the design of surveys and experiments....
, referring to the number of top three results an athlete has achieved over the course of a season or career.


First use at Olympics

According to Professor Emeritus Robert K. Barney, the University of Western Ontario
University of Western Ontario
The University of Western Ontario is a public research university located in London, Ontario, Canada. The university's main campus covers of land, with the Thames River cutting through the eastern portion of the main campus. Western administers its programs through 12 different faculties and...
's founding director of Western's International Centre for Olympic Studies, the idea of having winning athletes mount a podium while they received their medals, is a Canadian idea born in Hamilton, Ontario
Hamilton, Ontario
Hamilton is a port city in the Canadian province of Ontario. Conceived by George Hamilton when he purchased the Durand farm shortly after the War of 1812, Hamilton has become the centre of a densely populated and industrialized region at the west end of Lake Ontario known as the Golden Horseshoe...
in 1930. 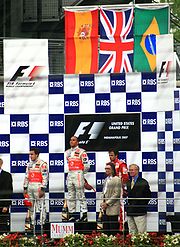 In many forms of motorsport, the three top-placed drivers in a race stand on a podium for the trophy ceremony. In an international series, the national anthem of the winning driver, and the winning team or constructor may be played and the flags of the drivers' countries are hoisted above them.

Following the presentation of the trophies, the drivers will often spray champagne over each other and their team-members watching below, a tradition started by Dan Gurney
Dan Gurney
Daniel Sexton Gurney is an American racing driver, race car constructor, and team owner.The son of a Metropolitan Opera star, he was born in Port Jefferson, New York, but moved to California as a teenager...
following the 1967 24 Hours of Le Mans
1967 24 Hours of Le Mans
The 1967 24 Hours of Le Mans was the 35th Grand Prix of Endurance, and took place on June 10 and 11 1967. It was also the seventh round of the World Sportscar Championship....
race. The drivers will generally refrain from spraying champagne if a fatality or major accident occurs during the event.

The term has become common parlance in the media, where a driver may be said to "be heading for a podium finish" or "just missing out on a podium" when he is heading for, or just misses out on a top three finish.

The NASCAR
NASCAR
The National Association for Stock Car Auto Racing is a family-owned and -operated business venture that sanctions and governs multiple auto racing sports events. It was founded by Bill France Sr. in 1947–48. As of 2009, the CEO for the company is Brian France, grandson of the late Bill France Sr...
Sprint Cup Series, the highest level of stock car racing in the United States, does not have a three-person podium. Instead the winning driver and team celebrate in victory lane.