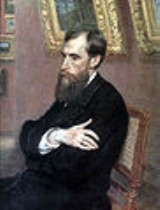 Pavel Mikhaylovich Tretyakov was a Russia
Russia
Russia or , officially known as both Russia and the Russian Federation , is a country in northern Eurasia. It is a federal semi-presidential republic, comprising 83 federal subjects...
n businessman, patron of art
Art
Art is the product or process of deliberately arranging items in a way that influences and affects one or more of the senses, emotions, and intellect....
, collector, and philanthropist
Philanthropist
A philanthropist is someone who engages in philanthropy; that is, someone who donates his or her time, money, and/or reputation to charitable causes...
who gave his name to the Tretyakov Gallery
Tretyakov Gallery
The State Tretyakov Gallery is an art gallery in Moscow, Russia, the foremost depository of Russian fine art in the world.The gallery's history starts in 1856 when the Moscow merchant Pavel Mikhailovich Tretyakov acquired works by Russian artists of his day with the aim of creating a collection,...
and Tretyakov Drive in Moscow
Moscow
Moscow is the capital, the most populous city, and the most populous federal subject of Russia. The city is a major political, economic, cultural, scientific, religious, financial, educational, and transportation centre of Russia and the continent...
. His brother S.M. Tretyakov was also a famous patron of art and a philanthropist.

Tretyakov was taught at home. In the first half of 1850 he inherited his father's business and built up a profitable trade in flax
Flax
Flax is a member of the genus Linum in the family Linaceae. It is native to the region extending from the eastern Mediterranean to India and was probably first domesticated in the Fertile Crescent...
, linen
Linen
Linen is a textile made from the fibers of the flax plant, Linum usitatissimum. Linen is labor-intensive to manufacture, but when it is made into garments, it is valued for its exceptional coolness and freshness in hot weather....
processing and the sale of textiles.

Together with other Moscow businessmen he acted as the founder of the Moscow merchant bank (becoming one of its heads), the Moscow commercial and industrial company, some other large firms. He amassed a considerable fortune (4.4 million rubles
Russian ruble
The ruble or rouble is the currency of the Russian Federation and the two partially recognized republics of Abkhazia and South Ossetia. Formerly, the ruble was also the currency of the Russian Empire and the Soviet Union prior to their breakups. Belarus and Transnistria also use currencies with...
), consisting of real estate (5 houses in Moscow
Moscow
Moscow is the capital, the most populous city, and the most populous federal subject of Russia. The city is a major political, economic, cultural, scientific, religious, financial, educational, and transportation centre of Russia and the continent...
), securities, money and bills.

Tretyakov started to collect art in 1854 at the age of 24; his first purchase was 10 canvases by Old Dutch
Netherlands
The Netherlands is a constituent country of the Kingdom of the Netherlands, located mainly in North-West Europe and with several islands in the Caribbean. Mainland Netherlands borders the North Sea to the north and west, Belgium to the south, and Germany to the east, and shares maritime borders...
masters. He laid down for himself the aim of creating a Russian National Gallery (disambiguation). In his collection Tretyakov included the most valuable and remarkable products, first of all the contemporaries, from 1870 - mainly members of the society of circulating art exhibitions (Tovarishchestvo peredvizhnyh hudozhestvennyh vystavok or Peredvizhniki
Peredvizhniki
Peredvizhniki , often called The Wanderers or The Itinerants in English, were a group of Russian realist artists who in protest at academic restrictions formed an artists' cooperative; it evolved into the Society for Travelling Art Exhibitions in 1870.- History :In 1863 a group of fourteen students...
, Передвижники in Russian). He bought paintings at exhibitions and directly from artists' studios, sometimes he bought the whole series: in 1874 he acquired V.V. Vereschagin's "Turkestan series" (13 pictures, 133 figures and 81 studies), in 1880 - his "Indian series" (78 studies). In his collection there were over 80 studies by Alexander Ivanov. In 1885 Tretyakov bought 102 studies by V.D. Polenov painted by the artist during journeys across Turkey
Turkey
Turkey , known officially as the Republic of Turkey , is a Eurasian country located in Western Asia and in East Thrace in Southeastern Europe...
, Egypt
Egypt
Egypt , officially the Arab Republic of Egypt, Arabic: , is a country mainly in North Africa, with the Sinai Peninsula forming a land bridge in Southwest Asia. Egypt is thus a transcontinental country, and a major power in Africa, the Mediterranean Basin, the Middle East and the Muslim world...
, Syria
Syria
Syria , officially the Syrian Arab Republic , is a country in Western Asia, bordering Lebanon and the Mediterranean Sea to the West, Turkey to the north, Iraq to the east, Jordan to the south, and Israel to the southwest....
and Palestine
Palestine
Palestine is a conventional name, among others, used to describe the geographic region between the Mediterranean Sea and the Jordan River, and various adjoining lands....
. He got also acquired Vasnetsov’s collection of the sketches made during work above lists in the Kiev
Kiev
Kiev or Kyiv is the capital and the largest city of Ukraine, located in the north central part of the country on the Dnieper River. The population as of the 2001 census was 2,611,300. However, higher numbers have been cited in the press....
St. Volodymyr's Cathedral. Tretyakov had the fullest collection of such artists as: V.G. Perov, I.N. Kramskoi, Ilya Repin, Vasily Surikov
Vasily Surikov
Vasily Ivanovich Surikov was the foremost Russian painter of large-scale historical subjects...
, I.I. Levitan, and Valentin Serov
Valentin Serov
Valentin Alexandrovich Serov was a Russian painter, and one of the premier portrait artists of his era.-Youth and education:...
. Aspiring to show the beginnings and development of the domestic school of art , Tretyakov began to acquire pictures by masters of the XVIII - first half XIX centuries and landmarks of Old Russian painting. He also conceived the creation of a "Russian pantheon
Pantheon (gods)
A pantheon is a set of all the gods of a particular polytheistic religion or mythology.Max Weber's 1922 opus, Economy and Society discusses the link between a...
" - a portrait gallery of famous Russians. He commissioned especially for it portraits of figures of domestic culture from leading masters of this genre - N.N. Ge
Nikolai Ge
Nikolai Nikolaevich Ge was a Russian realist painter famous for his works on historical and religious motifs.-Early life and education:...
, Kramskoi, N.V. Nevrev, Perov, Repin.

In 1870-80 Tretyakov also began to collect illustrations (471 by 1893), since 1890 he formed a collection of icon
Icon
An icon is a religious work of art, most commonly a painting, from Eastern Christianity and in certain Eastern Catholic churches...
s. During his lifetime they were not included in an exhibition, being kept in the owner's study. He also collected sculpture
Sculpture
Sculpture is three-dimensional artwork created by shaping or combining hard materials—typically stone such as marble—or metal, glass, or wood. Softer materials can also be used, such as clay, textiles, plastics, polymers and softer metals...
, however this part of his collection was small (9 sculptures by 1893).

At first the gallery was located in Tretyakov’s house in Lavrushenski pereulok. But as his collection expanded he decided to reconstruct his house for his collection. In 1870-1880 the house was repeatedly reconstructed by the architect Kaminski.

Tretyakov wanted to transfer the gallery to the city as discreetly as possible, without any noise; he didn’t want to be in the center of general attention and an object of gratitude. But it was not possible to do it and he was very dissatisfied.

From 1881 his gallery became popular (by 1885 it was visited by about 30 thousand people). In 1892 Tretyakov inherited a collection of Western European painting from his brother and placed it in two halls of the western school. The collection in Tretyakov’s gallery was equal in importance with the largest museums in Russia at that time, and became one of sights of Moscow
Moscow
Moscow is the capital, the most populous city, and the most populous federal subject of Russia. The city is a major political, economic, cultural, scientific, religious, financial, educational, and transportation centre of Russia and the continent...
. In August 1892 Tretyakov donated his collection and a private residence to Moscow. By then in the collection there were 1287 picturesque and 518 graphic products of Russian school, 75 pictures and 8 figures of the West-European school, 15 sculptures and collections of icons.

On August, 15 1893 the official opening of a museum under the name "Pavel and Sergey Tretyakov City art gallery" (nowadays Tretyakov Gallery
Tretyakov Gallery
The State Tretyakov Gallery is an art gallery in Moscow, Russia, the foremost depository of Russian fine art in the world.The gallery's history starts in 1856 when the Moscow merchant Pavel Mikhailovich Tretyakov acquired works by Russian artists of his day with the aim of creating a collection,...
) took place. By 1890 it was visited by up to 150 thousand people annually. Tretyakov continued to fill up his collection, for example, in 1894 he donated a gallery of 30 pictures, 12 figures and a marble statue “The Christian martyrs“ works by M.M. Antokolski
Mark Antokolski
Mark Matveyevich Antokolski was a Russian sculptor who was admired for psychological complexity of his historical images and panned for occasional lapses into sentimentalism.-Biography:...
. He was engaged in studying the collection, and from 1893 issued its catalogue.

Tretyakov consisted the honorary member of the Society of fans of applied arts and the Musical society from the date of their basis, granted the solid sums, supporting all educational undertakings. He took part in set of charitable certificates, all donations in the help to families of victims the soldier during the Crimean and Russo-Turkish War. Tretyakov's grants were established in commercial schools - by Moscow and Alexandrovskoe. He never refused in the monetary help to artists and the other applicants, carefully cared of monetary business of painters who without fear entrusted to him their savings. Pavel Mikhailovich repeatedly lent money to the kind counselor and adviser I.N. Kramskoi, V.G. Khudyakov, K.A. Trutovski, M.K. Klodt and much helped disinterestedly to others. Brothers - Pavel and Sergey Tretyakov - based in Moscow Arnoldo-Tretyakov School for deaf-mutes. Guardianship above the school, beginning in 1860th, proceeded during P.M. Tretyakov's life and after his death.

In his will Tretyakov provided large sums for school of deaf-mutes. For pupils of school Tretyakov bought the big stone house with a garden. 150 boys and girls lived in this house. Here they were brought up to 16 year old and left receiving profession in this school. Tretyakov selected the best teachers, got acquainted with the methods of studying.

Pavel Tretyakov bequeathed half of his estate to charitable purposes: on the device of a shelter for widows, juvenile children and unmarried daughters of died artists, and also on financing of gallery.

A minor planet
Minor planet
An asteroid group or minor-planet group is a population of minor planets that have a share broadly similar orbits. Members are generally unrelated to each other, unlike in an asteroid family, which often results from the break-up of a single asteroid...
3925 Tret'yakov
3925 Tret'yakov
3925 Tret'yakov is a main-belt asteroid discovered on September 19, 1977 by L. Zhuravleva at Nauchnyj.- External links :*...
, discovered by Soviet
Soviet Union
The Soviet Union , officially the Union of Soviet Socialist Republics , was a constitutionally socialist state that existed in Eurasia between 1922 and 1991....
astronomer Lyudmila Zhuravlyova
Lyudmila Zhuravlyova
Lyudmila Vasilyevna Zhuravleva is a Soviet, Russian and Ukrainian astronomer.She works at the Crimean Astrophysical Observatory.She also serves as president...
in 1977 is named after Pavel Tretyakov and his brother Sergei Mikhailovich Tretyakov (1824–1892).
The source of this article is wikipedia, the free encyclopedia.  The text of this article is licensed under the GFDL.