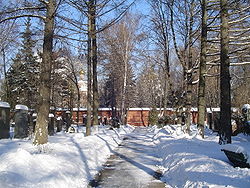 The cemetery was inaugurated in 1898, when it was judged that there were too many burials within monastery walls. One of the first notables to be buried there was Anton Chekhov
Anton Chekhov
Anton Pavlovich Chekhov was a Russian physician, dramatist and author who is considered to be among the greatest writers of short stories in history. His career as a dramatist produced four classics and his best short stories are held in high esteem by writers and critics...
, whose gilded tomb is the work of Fyodor Shekhtel. Today, the cemetery holds the tombs of Russian authors, musicians, playwrights, and poets, as well as famous actors, political leaders, and scientists.
More than 27,000 are buried at Novodevichy.

The cemetery has a park-like ambience, dotted with small chapels and large sculpted monuments. It is divided into the old (Divisions 1-4), new (Divisions 5-8) and newest (Divisions 9-11) sections; maps are available at the cemetery office.

Under Soviet rule, burial in the Novodevichy Cemetery was second in prestige only to burial in the Kremlin Wall Necropolis
Kremlin Wall Necropolis
Burials in the Kremlin Wall Necropolis in Moscow began in November 1917, when 240 pro-Bolshevik victims of the October Revolution were buried in mass graves on Red Square. It is centered on both sides of Lenin's Mausoleum, initially built in wood in 1924 and rebuilt in granite in 1929–1930...
. Since the fall of the Soviet Union, the Kremlin Wall is no longer used for burials and the Novodevichy Cemetery is used for only the most symbolically significant burials. For example, in April 2007, within one week both the first President of the Russian Federation Boris Yeltsin
Boris Yeltsin
Boris Nikolayevich Yeltsin was the first President of the Russian Federation, serving from 1991 to 1999.Originally a supporter of Mikhail Gorbachev, Yeltsin emerged under the perestroika reforms as one of Gorbachev's most powerful political opponents. On 29 May 1990 he was elected the chairman of...
and world renowned cellist Mstislav Rostropovich
Mstislav Rostropovich
Mstislav Leopoldovich Rostropovich, KBE , known to close friends as Slava, was a Soviet and Russian cellist and conductor. He was married to the soprano Galina Vishnevskaya. He is widely considered to have been the greatest cellist of the second half of the 20th century, and one of the greatest of...
were buried there.

In 2001, there was an attempt to move ballerina Anna Pavlova's remains to the Novodevichy Cemetery in accordance with her requests and after considerable controversy.

The work of these sculptors, among others, can be found at Novodevichy Cemetery: