Encyclopedia
The State Tretyakov Gallery is an art gallery in Moscow
Moscow
Moscow is the capital, the most populous city, and the most populous federal subject of Russia. The city is a major political, economic, cultural, scientific, religious, financial, educational, and transportation centre of Russia and the continent...
, Russia
Russia
Russia or , officially known as both Russia and the Russian Federation , is a country in northern Eurasia. It is a federal semi-presidential republic, comprising 83 federal subjects...
, the foremost depository of Russian fine art
Fine art
Fine art or the fine arts encompass art forms developed primarily for aesthetics and/or concept rather than practical application. Art is often a synonym for fine art, as employed in the term "art gallery"....
in the world.

The gallery
Art gallery
An art gallery or art museum is a building or space for the exhibition of art, usually visual art.Museums can be public or private, but what distinguishes a museum is the ownership of a collection...
's history starts in 1856 when the Moscow
Moscow
Moscow is the capital, the most populous city, and the most populous federal subject of Russia. The city is a major political, economic, cultural, scientific, religious, financial, educational, and transportation centre of Russia and the continent...
merchant Pavel Mikhailovich Tretyakov acquired works by Russia
Russia
Russia or , officially known as both Russia and the Russian Federation , is a country in northern Eurasia. It is a federal semi-presidential republic, comprising 83 federal subjects...
n artists of his day with the aim of creating a collection
Collection (museum)
A museum is distinguished by a collection of often unique objects that forms the core of its activities for exhibitions, education, research, etc. This differentiates it from an archive or library, where the contents may be more paper-based, replaceable and less exhibition oriented...
, which might later grow into a museum
Museum
A museum is an institution that cares for a collection of artifacts and other objects of scientific, artistic, cultural, or historical importance and makes them available for public viewing through exhibits that may be permanent or temporary. Most large museums are located in major cities...
of national art. In 1892, Tretyakov presented his already famous collection to the Russian nation
Nation
A nation may refer to a community of people who share a common language, culture, ethnicity, descent, and/or history. In this definition, a nation has no physical borders. However, it can also refer to people who share a common territory and government irrespective of their ethnic make-up...
.

The façade of the gallery building was designed by the painter Viktor Vasnetsov
Viktor Vasnetsov
Viktor Mikhaylovich Vasnetsov , 1848 — Moscow, July 23, 1926) was a Russian artist who specialized in mythological and historical subjects. He was described as co-founder of folklorist/romantic modernism in the Russian painting and a key figure of the revivalist movement in Russian art.- Childhood ...
in a peculiar Russian fairy-tale style. It was built in 1902–04 to the south from the Moscow Kremlin
Moscow Kremlin
The Moscow Kremlin , sometimes referred to as simply The Kremlin, is a historic fortified complex at the heart of Moscow, overlooking the Moskva River , Saint Basil's Cathedral and Red Square and the Alexander Garden...
. During the 20th century, the gallery expanded to several neighboring buildings, including the 17th-century church of St. Nicholas in Tolmachi.

The collection contains more than 130,000 exhibits, ranging from Theotokos of Vladimir
Theotokos of Vladimir
The Theotokos of Vladimir , also known as Our Lady of Vladimir or Virgin of Vladimir and "The Vladimir Madonna" - is one of the most venerated Orthodox icons and a typical example of Eleusa Byzantine iconography. The Theotokos is regarded as the holy protectress of Russia...
and Andrei Rublev
Andrei Rublev
Andrei Rublev is considered to be the greatest medieval Russian painter of Orthodox icons and frescoes.-Biography:...
's Trinity
Trinity (Andrei Rublev)
Trinity is a Holy Trinity Icon, believed to be created by Russian painter Andrei Rublev in the XV century. It is his most famous work, as well regarded as one of the highest achievements of Russian art. Trinity depicts the three angels who visited Abraham at the oak of Mamre Trinity is a Holy...
to the monumental Composition VII by Wassily Kandinsky
Wassily Kandinsky
Wassily Wassilyevich Kandinsky was an influential Russian painter and art theorist. He is credited with painting the first purely-abstract works. Born in Moscow, Kandinsky spent his childhood in Odessa. He enrolled at the University of Moscow, studying law and economics...
and the Black Square by Kazimir Malevich
Kazimir Malevich
Kazimir Severinovich Malevich was a Russian painter and art theoretician, born of ethnic Polish parents. He was a pioneer of geometric abstract art and the originator of the Avant-garde Suprematist movement.-Early life:...
.

In 1977 the Gallery kept a significant part of the George Costakis
George Costakis
In the years surrounding the 1917 revolution, artists in Russia produced the first non-figurative art, which was to become the defining art of the 20th century...
collection. 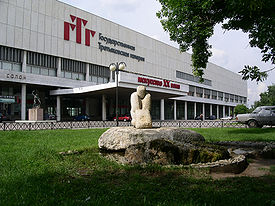 In 1985, the Tretyakov Gallery was administratively merged with a gallery of contemporary art, housed in a large modern building along the Garden Ring
Garden Ring
The Garden Ring, also known as the "B" Ring , is a circular avenue around the central Moscow, its course corresponding to what used to be the city ramparts surrounding Zemlyanoy Gorod in the 17th century....
, immediately south of the Crimean Bridge. The grounds of this branch of the museum contain a collection of Socialist Realism
Socialist realism
Socialist realism is a style of realistic art which was developed in the Soviet Union and became a dominant style in other communist countries. Socialist realism is a teleologically-oriented style having its purpose the furtherance of the goals of socialism and communism...
sculpture, including such highlights as Yevgeny Vuchetich
Yevgeny Vuchetich
Yevgeny Viktorovich Vuchetich was a prominent Soviet sculptor and artist. He is known for his heroic monuments, often of allegoric style.He was born in Yekaterinoslav, Russian Empire...
's iconic statue of "Iron Felix" (which was removed from Lubyanka Square
Lubyanka Square
Lubyanka Square in Moscow is about north east of Red Square. The name is first mentioned in 1480, when Ivan III settled many Novgorodians in the area. They built the church of St Sophia, modelled after St Sophia Cathedral in Novgorod, and called the area Lubyanka after the Lubyanitsy district of...
in 1991), the "Forge!" sculpture representing a nude worker forging a sword, and the "Young Russia" monument. Nearby is Zurab Tsereteli
Zurab Tsereteli
Zurab Konstantines dze Tsereteli is a Georgian-Russian painter, sculptor and architect who holds the office of President of the Russian Academy of Arts.- Life :...
's 86-metre-tall statue of Peter the Great, one of the tallest outdoor statues in the world.

Near the Gallery of modern art there is a sculpture garden called "the graveyard of fallen monuments" that displays statues of former Soviet Union
Soviet Union
The Soviet Union , officially the Union of Soviet Socialist Republics , was a constitutionally socialist state that existed in Eurasia between 1922 and 1991....
that were relocated.

There are certain plans to demolish the gallery constructed in the late Soviet modernism style, though the public opinion is strongly against them.