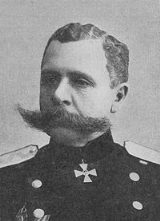 Encyclopedia
Paul von Rennenkampf (April 17, 1854 – 1 April 1918) was a Russia
Russia
Russia or , officially known as both Russia and the Russian Federation , is a country in northern Eurasia. It is a federal semi-presidential republic, comprising 83 federal subjects...
n general
General
A general officer is an officer of high military rank, usually in the army, and in some nations, the air force. The term is widely used by many nations of the world, and when a country uses a different term, there is an equivalent title given....
who served in the Imperial Russian Army
Imperial Russian Army
The Imperial Russian Army was the land armed force of the Russian Empire, active from around 1721 to the Russian Revolution of 1917. In the early 1850s, the Russian army consisted of around 938,731 regular soldiers and 245,850 irregulars . Until the time of military reform of Dmitry Milyutin in...
for over 40 years, including during World War I
World War I
World War I , which was predominantly called the World War or the Great War from its occurrence until 1939, and the First World War or World War I thereafter, was a major war centred in Europe that began on 28 July 1914 and lasted until 11 November 1918...
.

Rennenkampf, of Baltic German
Baltic German
The Baltic Germans were mostly ethnically German inhabitants of the eastern shore of the Baltic Sea, which today form the countries of Estonia and Latvia. The Baltic German population never made up more than 10% of the total. They formed the social, commercial, political and cultural élite in...
extraction, was born in 1854 in Konuvere Mansion, now in Märjamaa Parish
Märjamaa Parish
Märjamaa Parish is an Estonian municipality located in Rapla County. It has a population of 7,542 and an area of 871.62 km²...
, Rapla County
Rapla County
Rapla County , or Raplamaa, is one of 15 counties of Estonia. It is situated in western part of the country and borders Järva County to the east, Pärnu County to the south, Lääne County to the west, and Harju County to the north...
, Estonia
Estonia
Estonia , officially the Republic of Estonia , is a state in the Baltic region of Northern Europe. It is bordered to the north by the Gulf of Finland, to the west by the Baltic Sea, to the south by Latvia , and to the east by Lake Peipsi and the Russian Federation . Across the Baltic Sea lies...
. He joined the Imperial Russian Army at 19 and attended the Junker Infantry School in Helsinki
Helsinki
Helsinki is the capital and largest city in Finland. It is in the region of Uusimaa, located in southern Finland, on the shore of the Gulf of Finland, an arm of the Baltic Sea. The population of the city of Helsinki is , making it by far the most populous municipality in Finland. Helsinki is...
. He began his military career with the Lithuanian 5th Lancers Regiment. He graduated at the head of his class from the Nikolaevsky Military Academy
General Staff Academy (Imperial Russia)
The General Staff Academy was a Russian military academy, established in 1832 in St.Petersburg. It was first known as the Imperial Military Academy , then in 1855 it was renamed Nicholas General Staff Academy and in 1909 - Imperial Nicholas Military Academy The General Staff Academy was a...
in St. Petersburg
Saint Petersburg
Saint Petersburg is a city and a federal subject of Russia located on the Neva River at the head of the Gulf of Finland on the Baltic Sea...
in 1882. He was assigned as a junior officer to the 14th Army Corps until 1884, and to the Warsaw Military District followed by the Kazan Military District to 1886. Rennenkampf was subsequently a senior aide to the headquarters of the Don Cossaks from March 1888, staff officier to the 2nd Army Corps from October 1889, and Chief of Staff of the Osowiec Fortress
Osowiec Fortress
Osowiec Fortress - a 19th century fortress located in north-eastern Poland, originally built by the Russian Empire. The Russian name is Крепость Осовец i.e. Krepost Osovets. In English sources it is variously given as Osowiec , Osovets, Ossovetz, Osovetz and Ossovets...
from March 1890. The same year he was promoted to colonel. From November 1899, Rennenkampf, as chief of staff of the Transbaikalia region, was promoted to major general. 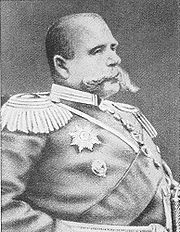 After the rebellion, Rennenkampf was offered a command in the Imperial Guard, but to the Tsar's surprise, he turned it down. He was then given command of the 1st Independent Cavalry Brigade, a post he held until 1904.

After the Russo-Japanese War, Rennenkampf restored part of his reputation dealing with revolutionaries in Siberia
Siberia
Siberia is an extensive region constituting almost all of Northern Asia. Comprising the central and eastern portion of the Russian Federation, it was part of the Soviet Union from its beginning, as its predecessor states, the Tsardom of Russia and the Russian Empire, conquered it during the 16th...
. His suppression of the Chita Republic
Chita Republic
The Chita Republic was a short-term workers and peasants' dictatory republic in Chita. Chita was a city in eastern Siberia, Russia and place of exile for early revolutionaries was a center for worker unrest in the early years of the 20th century...
led to his promotion to full general in December 1910. From 1912, he was promoted to Adjutant General and appointed Chief-of-Staff of the Vilno Military District
Vilno Military District (Russian Empire)
Vilno Military District was a Russian military district of the Imperial Russian Army.In the Russian Empire, military districts were first formed by Dmitry Milyutin in 1862–64 to replace the pre-existing Military Inspectorates...
.

At the start of World War I
World War I
World War I , which was predominantly called the World War or the Great War from its occurrence until 1939, and the First World War or World War I thereafter, was a major war centred in Europe that began on 28 July 1914 and lasted until 11 November 1918...
, Rennenkampf was given command of the Russian First Army for the invasion of East Prussia
East Prussia
East Prussia is the main part of the region of Prussia along the southeastern Baltic Coast from the 13th century to the end of World War II in May 1945. From 1772–1829 and 1878–1945, the Province of East Prussia was part of the German state of Prussia. The capital city was Königsberg.East Prussia...
, advancing from the North East. His behavior during the Battle of Tannenberg
Battle of Tannenberg (1914)
The Battle of Tannenberg was an engagement between the Russian Empire and the German Empire in the first days of World War I. It was fought by the Russian First and Second Armies against the German Eighth Army between 23 August and 30 August 1914. The battle resulted in the almost complete...
, particularly his failure to coordinate with Samsonov's Second Army
2nd Army (Russian Empire)
The Russian Second Army was commanded by General Alexander Samsonov. It was destroyed at the Battle of Tannenberg in 1914....
, resulted in much criticism from sector commander General Yakov Zhilinskiy
Yakov Zhilinskiy
Yakov Zhilinski was Chief of Staff of the Imperial Russian Army prior to World War I and thereafter as a field commander until he was relieved of command in 1914.- Biography :...
and attempts by some members of the military high command to have him removed from command.

After relative success at the Battle of Gumbinnen
Battle of Gumbinnen
The Battle of Gumbinnen, initiated by forces of the German Empire on August 20, 1914, was the first major German offensive on the Eastern Front during the First World War...
in mid-August, failure at the First Battle of the Masurian Lakes that same month, which forced a Russian withdrawal from East Prussia, and at the Battle of Łódź in November 1914, led to Rennenkampf's dismissal amid recriminations of incompetence and even treason (due to his heritage). Rennenkampf gave his resignation on October 6, 1915. After the February Revolution
February Revolution
The February Revolution of 1917 was the first of two revolutions in Russia in 1917. Centered around the then capital Petrograd in March . Its immediate result was the abdication of Tsar Nicholas II, the end of the Romanov dynasty, and the end of the Russian Empire...
of 1917 he was imprisoned in the Peter and Paul Fortress
Peter and Paul Fortress
The Peter and Paul Fortress is the original citadel of St. Petersburg, Russia, founded by Peter the Great in 1703 and built to Domenico Trezzini's designs from 1706-1740.-History:...
in St. Petersburg by the Russian Provisional Government
Russian Provisional Government
The Russian Provisional Government was the short-lived administrative body which sought to govern Russia immediately following the abdication of Tsar Nicholas II . On September 14, the State Duma of the Russian Empire was officially dissolved by the newly created Directorate, and the country was...
who accused Rennenkampf of criminal activities from the start of World War I, including embezzlement and mismanagement.

Rennenkampf was set free after the October Revolution
October Revolution
The October Revolution , also known as the Great October Socialist Revolution , Red October, the October Uprising or the Bolshevik Revolution, was a political revolution and a part of the Russian Revolution of 1917...
and moved to the city of Taganrog
Taganrog
Taganrog is a seaport city in Rostov Oblast, Russia, located on the north shore of Taganrog Bay , several kilometers west of the mouth of the Don River. Population: -History of Taganrog:...
on the Azov Sea coast, where he lived under the false name of Mandusakis claiming to be a Greek citizen; however, the ruse was discovered by the Bolshevik
Bolshevik
The Bolsheviks, originally also Bolshevists , derived from bol'shinstvo, "majority") were a faction of the Marxist Russian Social Democratic Labour Party which split apart from the Menshevik faction at the Second Party Congress in 1903....
s on March 16, 1918. They approached and offered him a command in the Red Army
Red Army
The Workers' and Peasants' Red Army started out as the Soviet Union's revolutionary communist combat groups during the Russian Civil War of 1918-1922. It grew into the national army of the Soviet Union. By the 1930s the Red Army was among the largest armies in history.The "Red Army" name refers to...
to serve during the Russian Civil War
Russian Civil War
The Russian Civil War was a multi-party war that occurred within the former Russian Empire after the Russian provisional government collapsed to the Soviets, under the domination of the Bolshevik party. Soviet forces first assumed power in Petrograd The Russian Civil War (1917–1923) was a...
. He refused the offer and was promptly arrested and executed on 1 April 1918 on the personal orders of Vladimir Antonov-Ovseyenko.

Rennenkampf's personal belongings and art objects that he had acquired during the Boxer Rebellion are now displayed in the Alferaki Palace
Alferaki Palace
Alferaki Palace is a museum in Taganrog, Russia, originally the home of rich merchant Nikolay Alferaki. It was built in 1848 by the architect Andrei Stackenschneider in the downtown Taganrog on Frunze Street ....
in Taganrog
Taganrog
Taganrog is a seaport city in Rostov Oblast, Russia, located on the north shore of Taganrog Bay , several kilometers west of the mouth of the Don River. Population: -History of Taganrog:...
.