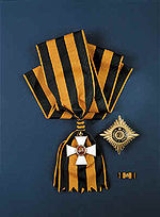 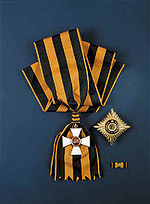 The Military Order of the Holy Great-Martyr and the Triumphant George (also known as Order of St. George the Triumphant, Russian
Russian language
Russian is a Slavic language used primarily in Russia, Belarus, Uzbekistan, Kazakhstan, Tajikistan and Kyrgyzstan. It is an unofficial but widely spoken language in Ukraine, Moldova, Latvia, Turkmenistan and Estonia and, to a lesser extent, the other countries that were once constituent republics...
: Военный орден Св. Великомученика и Победоносца Георгия, Voyenny Orden Sviatago Velikomuchenika i Pobedonostsa Georgiya) is an order of chivalry of Imperial Russia, the White movement
White movement
The White movement and its military arm the White Army - known as the White Guard or the Whites - was a loose confederation of Anti-Communist forces.The movement comprised one of the politico-military Russian forces who fought...
, and the Russian Federation, originally established in 1769 by Catherine the Great, and revived in 1994 by the Russian Federation. It is awarded in four classes, from the Fourth Degree to the First Degree. The highest degree is the First Degree. There also is an affiliated cross, the Cross of St. George
Cross of St. George
thumb|Original Cross of St. George.Ist and 2nd class were in gold.The Cross of St. George ', or simply the George's Cross, was, until 1913, officially known as the Sign of Distinction of the Military Order of St. George....
and a medal which is a level lower than the cross.

Cross ("Sign"): A white enamelled cross pattée with a central disc bearing the image of St. George on horseback slaying the dragon
Dragon
A dragon is a legendary creature, typically with serpentine or reptilian traits, that feature in the myths of many cultures. There are two distinct cultural traditions of dragons: the European dragon, derived from European folk traditions and ultimately related to Greek and Middle Eastern...
. Worn on a sash by the first degree, on a necklet by the second and third degrees, and on a chest ribbon by the fourth degree.

Star: A four-pointed gold star with the crowned cipher
Cipher
In cryptography, a cipher is an algorithm for performing encryption or decryption — a series of well-defined steps that can be followed as a procedure. An alternative, less common term is encipherment. In non-technical usage, a “cipher” is the same thing as a “code”; however, the concepts...
of St. George at the centre surrounded by the motto of the order "For Service and Bravery" ("Za Sluzhbu i Khrabrost"). Worn on the left chest by the first and second degrees.

Ribbon: orange with three black stripes, commonly called "George's Ribbon". It symbolises fire and gunpowder: the Russian "colors of military glory", and is also thought to be derived from the colours of the original Russian imperial coat of arms
Coat of arms of Russia
The coat of arms of Russia have gone through three major periods in their history, undergoing major changes in the transitions between the Russian Empire, the Soviet Union, and the Russian Federation. They date back to 1472, when Ivan III began using the double-headed eagle in his seal, which,...
(black eagle on a golden background). It was subsequently associated to the colors of the Russian Guard
Russian Guards
Guards or Guards units were and are elite military units in Imperial Russia, Soviet Union and the Russian Federation. The tradition goes back to the retinue of a knyaz of medieval Kievan Rus' and the streltsy, the Muscovite harquebusiers formed by Ivan the Terrible by 1550...
units. The ribbon bar
Ribbon bar
Ribbon bars are small decorations that are worn by military, police, and fire service personnel or by civilians. Ribbon bars are mainly used when wearing either full decoration, or when wearing medals is considered inappropriate or impractical. Each military force has its own rules on what ribbons...
repeats the pattern of the grand ribbon, with a miniature cross on the middle black stripe for the first three degrees (white enamelled for the 3rd, silver for the 2nd and gold for the 1st). 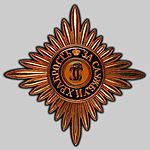 Eligibility: military officers and generals only, for the display of highest valour and skills in the face of an exterior enemy. This criterion was carried forward when the award was first reinstated in the Russian Federation. However, the statute was amended to permit the award of the order to senior commanders involved in the 2008 Georgia-Russia Conflict. Non-commissioned officers and rank-and-file may receive the Cross of St. George
Cross of St. George
thumb|Original Cross of St. George.Ist and 2nd class were in gold.The Cross of St. George ', or simply the George's Cross, was, until 1913, officially known as the Sign of Distinction of the Military Order of St. George....
, also in four degrees worn on a chest ribbon. Normally a person initially received the fourth degree, and would gradually be promoted to higher degrees for subsequent acts of bravery.

NOTE: all dates are Old Style.