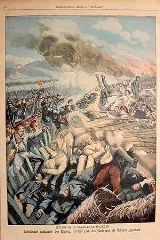 Encyclopedia
One of the largest land battles to be fought before World War I
World War I
World War I , which was predominantly called the World War or the Great War from its occurrence until 1939, and the First World War or World War I thereafter, was a major war centred in Europe that began on 28 July 1914 and lasted until 11 November 1918...
, the , the last major land battle
Battle
Generally, a battle is a conceptual component in the hierarchy of combat in warfare between two or more armed forces, or combatants. In a battle, each combatant will seek to defeat the others, with defeat determined by the conditions of a military campaign...
of the Russo-Japanese War
Russo-Japanese War
The Russo-Japanese War was "the first great war of the 20th century." It grew out of rival imperial ambitions of the Russian Empire and Japanese Empire over Manchuria and Korea...
, was fought from 20 February to 10 March 1905 between Japan and Russia near Mukden in Manchuria
Manchuria
Manchuria is a historical name given to a large geographic region in northeast Asia. Depending on the definition of its extent, Manchuria usually falls entirely within the People's Republic of China, or is sometimes divided between China and Russia. The region is commonly referred to as Northeast...
. The city is now called Shenyang
Shenyang
Shenyang , or Mukden , is the capital and largest city of Liaoning Province in Northeast China. Currently holding sub-provincial administrative status, the city was once known as Shengjing or Fengtianfu...
, the capital of Liaoning
Liaoning
' is a province of the People's Republic of China, located in the northeast of the country. Its one-character abbreviation is "辽" , a name taken from the Liao River that flows through the province. "Níng" means "peace"...
province in China
China
Chinese civilization may refer to:* China for more general discussion of the country.* Chinese culture* Greater China, the transnational community of ethnic Chinese.* History of China* Sinosphere, the area historically affected by Chinese culture...
.

The fall of Port Arthur
Lüshunkou
Lüshunkou is a district in the municipality of Dalian, Liaoning province, China. Also called Lüshun City or Lüshun Port, it was formerly known as both Port Arthur and Ryojun....
to General Nogi freed up the Japanese 3rd Army, which advanced north to reinforce the Japanese lines near Mukden in preparation for an attack.

By February 1905, the manpower reserves of the Japanese army had been drained. With the arrival of General Nogi's Third Army, Japan's entire fighting strength was concentrated at Mukden. The severe casualties, bitter cold climate, and approach of the Russian Baltic Fleet
Baltic Fleet
The Twice Red Banner Baltic Fleet - is the Russian Navy's presence in the Baltic Sea. In previous historical periods, it has been part of the navy of Imperial Russia and later the Soviet Union. The Fleet gained the 'Twice Red Banner' appellation during the Soviet period, indicating two awards of...
created pressure on Marshal Oyama to effect the complete destruction of the Russian forces, rather than just another victory from which the Russians could withdraw further into Manchuria
Manchuria
Manchuria is a historical name given to a large geographic region in northeast Asia. Depending on the definition of its extent, Manchuria usually falls entirely within the People's Republic of China, or is sometimes divided between China and Russia. The region is commonly referred to as Northeast...
.

The Russian line to the south of Mukden was 90 miles (144.8 km) long, with little depth and with a central reserve. On the right flank, in flat ground, was the Second Manchurian Army under General Baron von Kaulbars
Alexander Kaulbars
Baron Alexander Vasilyevich Kaulbars was a general in the Imperial Russian Army during the late 19th and early 20th centuries, and a noted explorer of Central Asia.-Biography:Kaulbars was a native St...
(who had replaced the unfortunate General Oskar-Ferdinand Kazimirovich Grippenberg). In the center, holding the railway and the highway was the Third Manchurian Army under General Bildering. The hilly terrain on the east flank was held by the First Manchurian Army under General Nikolai Linevich
Nikolai Linevich
Nikolai Petrovich Linevich, also Lenevich and Linevitch was a career military officer, General of Infantry and Adjutant general in the Imperial Russian Army in the Far East during the latter part of the Russo-Japanese War.-Biography:...
. This flank also held two-thirds of the Russian cavalry, under General Paul von Rennenkampf
Paul von Rennenkampf
Paul von Rennenkampf was a Russian general who served in the Imperial Russian Army for over 40 years, including during World War I.-Early career:...
. General Kuropatkin had thus disposed his forces in a purely defensive layout, from which it would be difficult to impossible to execute an offensive without opening a major gap in the lines.

On the Japanese side, the Japanese First Army
Japanese First Army
The was an army of the Imperial Japanese Army. It was raised and demobilized on three separate occasions.-History:The Japanese 1st Army was initially raised during the First Sino-Japanese War from September 1, 1894 to May 28, 1895 under the command of General Yamagata Aritomo...
(General Kuroki
Kuroki Tamemoto
Count was a general in the Imperial Japanese Army. He was the head of the Japanese First Army during the Russo-Japanese War; and his forces enjoyed a series of successes during the Manchurian fighting at the Battle of Yalu River, the Battle of Liaoyang, the Battle of Shaho and the Battle of...
) and Japanese Fourth Army (General Nozu
Nozu Michitsura
-External links:...
) advanced to the east of the rail line, and the Japanese Second Army (General Oku) to the west. General Nogi's Japanese Third Army was kept concealed behind the 2nd Army until the start of battle. A newly formed Japanese Ōryokukō (Yalu River) Army under General Kawamura provided a major diversion on the Russian eastern flank. The Yalu River Army was much under strength, and consisted only of the IJA 11th Division (from Port Arthur) and reservists. Despite that it was technically not under the Japanese Manchurian Army but directly under Imperial General Headquarters
Imperial General Headquarters
The as part of the Supreme War Council was established in 1893 to coordinate efforts between the Imperial Japanese Army and Imperial Japanese Navy during wartime...
to attack Primorsky Krai
Primorsky Krai
Primorsky Krai , informally known as Primorye , is a federal subject of Russia . Primorsky means "maritime" in Russian, hence the region is sometimes referred to as Maritime Province or Maritime Territory. Its administrative center is in the city of Vladivostok...
politically, the division was substantially under Manchuria HQ under the commander's decision.

General Kuropatkin was convinced that the main Japanese thrust would come from the mountainous eastern side, as the Japanese had proven themselves effective in such terrain, and the presence of the former 3rd Army veterans from the 11th Division in that area reinforced his convictions.

By 1 March 1905, action on the eastern and center fronts was largely static. The Japanese had made small advances but under heavy casualties. However, by 7 March, General Kuropatkin began withdrawing forces from the eastern front to counter the Japanese 3rd Army's moves on the western flank of Mukden, and was so concerned about General Nogi's movements that he decided to lead the counterattack himself. The shifting of forces from east to west was not well coordinated by the Russians, causing the 1st and 3rd Manchurian Armies to all but disintegrate into chaos. This was the chance that Field Marshal Oyama had been waiting for, and his orders to “attack” were changed to “pursue and destroy”. Luck was further with the Japanese due to the late thaw in the weather. The Hun River
Hun River
The Hun He is a river in Liaoning Province, China, and one of the tributaries of the Liao River. The Hun river was formerly known as Shen River . Several major cities are located on the Hun He , including the provincial capital Shenyang and Fushun....
remained frozen, and was not an obstacle to the Japanese attack.

All but encircled and with no hope for victory, General Kuropatkin gave the order to retreat to the north at 18:45 on 9 March. The Russian withdrawal was complicated by General Nozu's breach through Russian rearlines over the Hun River, and quickly turned into a rout. The panicked Russian forces abandoned their wounded, weapons and supplies in their flight north towards Tiehling.

Russian casualties amounted to nearly 90,000. The Russians had also lost most of their combat supplies as well as most of their artillery and heavy machine guns. Fearing further Japanese advances, General Kuropatkin ordered that the town of Tieling
Tieling
Tieling is a prefecture-level city in Liaoning province of the People's Republic of China.The population is 3 million at the 2nd of 2004. Tieling is a city where coal mining is an important industry.The mayor of Tieling is Li Wenke...
be put to the torch, and marched his remaining men 10 days further north to a new defense line at Hspingkai (modern Siping
Siping
Siping is a process of cutting thin slits across a rubber surface to improve traction in wet or icy conditions.Siping was invented and patented in 1923 under the name of John F. Sipe The story told on various websites is that, in the 1920s, Sipe worked in a slaughterhouse and grew tired of...
, Jilin province, China
China
Chinese civilization may refer to:* China for more general discussion of the country.* Chinese culture* Greater China, the transnational community of ethnic Chinese.* History of China* Sinosphere, the area historically affected by Chinese culture...
). The Japanese forces suffered 75,000 casualties which included a higher percentage of killed and wounded over the Russians.

No serious fighting on land occurred after this battle as both Russian and Japanese armies were exhausted from the conflict.