The first written records of Rapla date back to the 1241 Danish census (Liber Census Daniae).

The County Government (Estonian: Maavalitsus) is led by a Governor
County Governors of Estonia
The Governor is the leader of a county in Estonia.-List of governers of Estonian counties:Harju County:*Johannes Reinthal *Oskar Suursööt *Martin Kruusimaa *Rudolf Kuris...
(Estonian: maavanem), who is appointed by the Government of Estonia for a term of five years. Since 9 August 2004, the Governor position is held by Tõnis Blank. 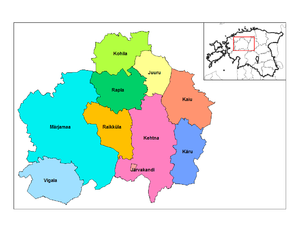 Natural resources found in Rapla county include limestone
Limestone
Limestone is a sedimentary rock composed largely of the minerals calcite and aragonite, which are different crystal forms of calcium carbonate . Many limestones are composed from skeletal fragments of marine organisms such as coral or foraminifera....
, dolomite
Dolomite
Dolomite is a carbonate mineral composed of calcium magnesium carbonate CaMg2. The term is also used to describe the sedimentary carbonate rock dolostone....
, peat
Peat
Peat is an accumulation of partially decayed vegetation matter or histosol. Peat forms in wetland bogs, moors, muskegs, pocosins, mires, and peat swamp forests. Peat is harvested as an important source of fuel in certain parts of the world...
, and clay
Clay
Clay is a general term including many combinations of one or more clay minerals with traces of metal oxides and organic matter. Geologic clay deposits are mostly composed of phyllosilicate minerals containing variable amounts of water trapped in the mineral structure.- Formation :Clay minerals...
.

The church of Rapla was built in 1901. However, much of the interior dates back to several hundred years earlier and is of high virtu and historical value. In the church yard there are several crosses remaining from the 17th century.