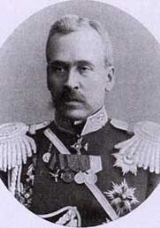 Zhilinsky was born into a family of minor nobility from Mikhaylov, Ryazan Oblast. He graduated from the Nicholas Cavalry School in St. Petersburg in 1876, and was assigned to the Horse Guards Regiment of the Imperial Guard as a cornet
Cornet
The cornet is a brass instrument very similar to the trumpet, distinguished by its conical bore, compact shape, and mellower tone quality. The most common cornet is a transposing instrument in B. It is not related to the renaissance and early baroque cornett or cornetto.-History:The cornet was...
. In 1883, he graduated from General Staff Academy
General Staff Academy (Imperial Russia)
The General Staff Academy was a Russian military academy, established in 1832 in St.Petersburg. It was first known as the Imperial Military Academy , then in 1855 it was renamed Nicholas General Staff Academy and in 1909 - Imperial Nicholas Military Academy The General Staff Academy was a...
, and after serving as a senior aide to the staff of the 1st Grenadier Division, he served from February 14, 1894 on the Military Scientific Committee of the General Staff, a military intelligence
Military intelligence
Military intelligence is a military discipline that exploits a number of information collection and analysis approaches to provide guidance and direction to commanders in support of their decisions....
organization responsible for the study of foreign countries.

During the Spanish-American War
Spanish-American War
The Spanish–American War was a conflict in 1898 between Spain and the United States, effectively the result of American intervention in the ongoing Cuban War of Independence...
Zhilinsky was Russian military observer
Military attaché
A military attaché is a military expert who is attached to a diplomatic mission . This post is normally filled by a high-ranking military officer who retains the commission while serving in an embassy...
at the general headquarters of the United States forces in Cuba
Cuba
The Republic of Cuba is an island nation in the Caribbean. The nation of Cuba consists of the main island of Cuba, the Isla de la Juventud, and several archipelagos. Havana is the largest city in Cuba and the country's capital. Santiago de Cuba is the second largest city...
. On his return, he published a book on the war, which analyzed the causes of the defeat of the Spanish Army
Spanish Army
The Spanish Army is the terrestrial army of the Spanish Armed Forces responsible for land-based military operations. It is one of the oldest active armies - dating back to the 15th century.-Introduction:...
. In 1899, Zhilinsky served as a member of Russian delegation at the Hague Peace Conference. He was appointed commander of the 52nd Dragoons Regiment from August 1899. In 1900, he was promoted to the rank of major general.

In the Russo-Japanese War
Russo-Japanese War
The Russo-Japanese War was "the first great war of the 20th century." It grew out of rival imperial ambitions of the Russian Empire and Japanese Empire over Manchuria and Korea...
(1904–1905), Zhilinsky was Chief of Staff to the Viceroy of the Far East, Admiral Yevgeni Alexeyev, until Alexeyev was dismissed in October 1904. He remained in the combat zone to serve the Minister of War, Aleksey Kuropatkin
Aleksey Kuropatkin
Alexei Nikolayevich Kuropatkin was the Russian Imperial Minister of War who is often held responsible for major Russian drawbacks in the Russian-Japanese War, notably the Battle of Mukden and the Battle of Liaoyang.-Early years:Kuropatkin was born in 1848 in what is now Pskov, in the Russian...
until the end of the conflict. From January 27, 1906 he was commander of the 14th cavalry Division, and from July 7, 1907 of the 10th Army Corps. Promoted to Cavalry general on April 18, 1910, he served as Chief of the Russian General Staff from February 22, 1911 to March 4, 1914.

At the beginning of World War I
World War I
World War I , which was predominantly called the World War or the Great War from its occurrence until 1939, and the First World War or World War I thereafter, was a major war centred in Europe that began on 28 July 1914 and lasted until 11 November 1918...
, Zhilinsky was appointed commander of the Warsaw Military District, Governors-General of Warsaw, and commander of the Northwestern Front
Northwestern Front (Russian Empire)
The Northwestern Front was a military formation of the Imperial Russian Army during the First World War.It was established in August 1914. In August 1915 it was split into Northern Front and Western Front....
. The Northwestern Front included the 1st Army and 2nd Army. After the unsuccessful East Prussian Campaign he was relieved of command and sent as a military representative to France from 1915-1916. He was recalled to Russia in the autumn of 1916. On September 19, 1917, he was ordered to retire. After the October Revolution
October Revolution
The October Revolution , also known as the Great October Socialist Revolution , Red October, the October Uprising or the Bolshevik Revolution, was a political revolution and a part of the Russian Revolution of 1917...
, he attempted to flee Russia, but was captured and executed by the Bolsheviks in 1918.