The House of Representatives usually consists of 120 Members of Parliament (MPs), sometimes more due to overhang seat
Overhang seat
Overhang seats can arise in elections under the traditional mixed member proportional system, when a party is entitled to fewer seats as a result of party votes than it has won constituencies.-How overhang seats arise:...
s. MPs are directly elected by universal suffrage
Universal suffrage
Universal suffrage consists of the extension of the right to vote to adult citizens as a whole, though it may also mean extending said right to minors and non-citizens...
. The form of New Zealand government essentially follows the Westminster system
Westminster System
The Westminster system is a democratic parliamentary system of government modelled after the politics of the United Kingdom. This term comes from the Palace of Westminster, the seat of the Parliament of the United Kingdom....
, and the government is led by the Prime Minister
Prime Minister of New Zealand
The Prime Minister of New Zealand is New Zealand's head of government consequent on being the leader of the party or coalition with majority support in the Parliament of New Zealand...
and cabinet
New Zealand Cabinet
The Cabinet of New Zealand functions as the policy and decision-making body of the executive branch within the New Zealand government system...
who are chosen from amongst the members of the House of Representatives.

One historical speciality of the New Zealand Parliament was the country quota, which gave greater representation to rural politics. From 1889 on (and even earlier in more informal forms), districts were weighted according to their urban/rural split (with any locality of less than 2,000 people considered rural). Those districts which had large rural proportions received a greater number of nominal votes than they actually contained voters – as an example, in 1927, Waipawa
Waipawa
Waipawa is the second-largest town in Central Hawke's Bay in the east of the North Island of New Zealand. At the 2001 Census it had a population of 1,872, a change of -2.0 percent since the 1996 census....
, a district without any urban population at all, received an additional 4,153 nominal votes to its actual 14,838 – having the maximum factor of 28% extra representation. The country quota was in effect until it was abolished in 1945 by a mostly urban-elected Labour government, which went back to a one voter, one vote system.

The New Zealand Parliament is sovereign with no institution able to over-ride its decisions. The ability of Parliament to act is, legally, unimpeded. For example, the New Zealand Bill of Rights Act
New Zealand Bill of Rights Act
The New Zealand Bill of Rights Act 1990 is a statute of the New Zealand Parliament setting out the rights and fundamental freedoms of the citizens of New Zealand as a Bill of rights...
is a normal piece of legislation, it is not superior law as written constitutions are in some other countries. The only thing Parliament is limited in its power are on some "entrenched" issues relating to elections. These include the length of its term, deciding on who can vote, how they vote (via secret ballot), how the country should be divided into electorates, and the make up of the Representation Commission which decides on these electorates. These issues require either 75% of all MPs to support the bill or a referendum
Referendums in New Zealand
Referendums are held only occasionally by the Government of New Zealand. Ten referendums have been held so far...
on the issue. (However, the entrenchment of these provisions is not itself entrenched. Therefore, Parliament can repeal the entrenchment of these issues with a simple majority, then change these issues with a simple majority.) 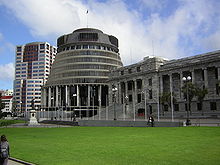 The New Zealand House of Representatives has been the New Zealand Parliament's sole chamber since 1951. It is democratically elected every three years, with eighteen select committees to scrutinise legislation.

In September 1950, the National
New Zealand National Party
The New Zealand National Party is the largest party in the New Zealand House of Representatives and in November 2008 formed a minority government with support from three minor parties.-Policies:...
government of Sidney Holland
Sidney Holland
Sir Sidney George Holland, GCMG, CH was the 25th Prime Minister of New Zealand from 13 December 1949 to 20 September 1957.-Early life:...
set up a constitutional reform committee to consider an alternative second chamber, chaired by Ronald Algie
Ronald Algie
Sir Ronald Macmillan Algie was a New Zealand politician who served as Speaker of the House of Representatives for six years in the 1960s. He described himself as "a Tory in the old tradition".-Early life:...
. A report produced by the committee in 1952 proposed a nominated Senate, with 32 members, appointed by leaders of the parties in the House of Representatives, in according to their strength in that House, Senators would serve for three year-terms, and be eligible for reappointment. The Senate would have the power to revise, initiate or delay legislation, to hear petitions, and to scrutinise regulations and Orders in Council but this was rejected by the Prime Minister, and the Labour
New Zealand Labour Party
The New Zealand Labour Party is a New Zealand political party. It describes itself as centre-left and socially progressive and has been one of the two primary parties of New Zealand politics since 1935....
opposition, which had refused to nominate members to the committee.

The National
New Zealand National Party
The New Zealand National Party is the largest party in the New Zealand House of Representatives and in November 2008 formed a minority government with support from three minor parties.-Policies:...
government of Jim Bolger
Jim Bolger
James Brendan "Jim" Bolger, ONZ was the 35th Prime Minister of New Zealand from 1990 to 1997. Bolger was elected on the promise of delivering a "Decent Society" following the previous Labour government's economic reforms, known as Rogernomics...
proposed the establishment of an elected Senate
Senate
A senate is a deliberative assembly, often the upper house or chamber of a legislature or parliament. There have been many such bodies in history, since senate means the assembly of the eldest and wiser members of the society and ruling class...
when it came to power in 1990, thereby reinstating a bicameral system, and a Senate Bill was drafted. Under the Bill, the Senate would have 30 members, elected by STV
Single transferable vote
The single transferable vote is a voting system designed to achieve proportional representation through preferential voting. Under STV, an elector's vote is initially allocated to his or her most preferred candidate, and then, after candidates have been either elected or eliminated, any surplus or...
, from six senatorial districts. Like the old Legislative Council, it would not have powers to amend or delay money bills. The House of Representatives would continue to be elected by FPP.

The intention was to include a question on a Senate in the second referendum on electoral reform. Voters would be asked, if they did not want a new voting system, whether or not they wanted a Senate. However, following objections from the Labour opposition, which derided it as a red herring, and other supporters of MMP, the Senate question was removed by the Select Committee on Electoral Reform.

The New Zealand Parliament's model for passing Acts of Parliament
Act of Parliament
An Act of Parliament is a statute enacted as primary legislation by a national or sub-national parliament. In the Republic of Ireland the term Act of the Oireachtas is used, and in the United States the term Act of Congress is used.In Commonwealth countries, the term is used both in a narrow...
is similar (but not identical) to that of other Westminster System
Westminster System
The Westminster system is a democratic parliamentary system of government modelled after the politics of the United Kingdom. This term comes from the Palace of Westminster, the seat of the Parliament of the United Kingdom....
governments.

Laws are initially proposed in Parliament as bills. They become Acts after being approved three times by Parliamentary votes and then receiving Royal Assent
Royal Assent
The granting of royal assent refers to the method by which any constitutional monarch formally approves and promulgates an act of his or her nation's parliament, thus making it a law...
from the Governor-General
Governor-General of New Zealand
The Governor-General of New Zealand is the representative of the monarch of New Zealand . The Governor-General acts as the Queen's vice-regal representative in New Zealand and is often viewed as the de facto head of state....
. The majority of bills are promulgated by the government of the day (that is, the party or parties that have a majority in Parliament). It is rare for government bills to be defeated, indeed the first to be defeated in the twentieth century was in 1998. It is also possible for individual MPs to promote their own bills, called member's bills; these are usually put forward by opposition parties, or by MPs who wish to deal with a matter that parties do not take positions on.

Within the House of Representatives, bills must pass through three readings and be considered by both a Select Committee and the Committee of the Whole House.

If a Bill passes its third reading, it is passed by the Clerk of the House of Representatives to the Governor-General, who will (assuming constitutional conventions are followed) grant Royal Assent as a matter of course. Some constitutional lawyers, such as Professor Philip Joseph
Philip Joseph
Philip Joseph is a Canadian-born physician and a cardiologist.-Biography:Philip Joseph studied medicine at the University of Western Ontario from where he was inspired to study internal medicine. From he completed a residency in Internal Medicine where his passion for studying coronary artery...
, believe the Governor-General does retain the power to refuse Royal Assent to Bills in exceptional circumstances – specifically if democracy were to be abolished. Others, such as former law professor and Prime Minister Sir Geoffrey Palmer and Matthew Palmer
Matthew Palmer
Matthew Simon Russell Palmer is a prominent New Zealand legal academic and public servant. Palmer was the Pro Vice-Chancellor , Dean of Law, and Director of the New Zealand Centre for Public Law at Victoria University of Wellington from January 2001 until June 2006. He was previously Deputy...
argue any refusal of Royal Assent would lead to a constitutional crisis.

Parliament is currently in its 49th term.