Before the election, the National Party had an unstable hold on power. After the 1996 election
New Zealand general election, 1996
The 1996 New Zealand general election was held on 12 October 1996 to determine the composition of the 45th New Zealand Parliament. It was notable for being the first election to be held under the new Mixed Member Proportional electoral system, and produced a parliament considerably more diverse...
National had formed a coalition with the populist New Zealand First
New Zealand First
New Zealand First is a political party in New Zealand that was founded in 1993, following party founder Winston Peters' resignation from the National Party in 1992...
party and its controversial leader, Winston Peters
Winston Peters
Winston Raymond Peters is a New Zealand politician and leader of New Zealand First, a political party he founded in 1993. Peters has had a turbulent political career since entering Parliament in 1978. He served as Minister of Maori Affairs in the Bolger National Party Government before being...
. Gradually, however, the relationship between the two parties declined, and Peters took his party out of the coalition. A number of New Zealand First MPs deserted Peters, establishing themselves as independents or as members of newly established parties. By forming agreements with these MPs, National was able to keep itself in office, but its control was often unsteady.

The Labour Party, which had been in Opposition since losing the 1990 election
New Zealand general election, 1990
The 1990 New Zealand general election was held on 27 October to determine the composition of the 43rd New Zealand parliament. The governing Labour Party was defeated, ending its controversial two terms in office...
, presented a strong challenge, particularly due to its agreement with the smaller Alliance party. The two had not previously enjoyed good relations, primarily due to the presence of the NewLabour Party
NewLabour Party (New Zealand)
NewLabour was a left-of-centre party founded in 1989 by Jim Anderton, an MP and former President of the New Zealand Labour Party.NewLabour was established by a number of Labour Party members who left the party in reaction to "Rogernomics", the economic policies implemented by the Labour Party's...
as one of the Alliance's key members. NewLabour had been established by Jim Anderton
Jim Anderton
James Patrick Anderton, usually known as Jim Anderton , is the leader of the Progressive Party, a New Zealand political party. He has served in Parliament since 1984. He served as Deputy Prime Minister from 1999 to 2002 and is currently also the sitting Father of the House, the longest...
, a former Labour MP who quit the party in protest over the economic reforms of Roger Douglas
Roger Douglas
Sir Roger Owen Douglas , is a New Zealand politician who formerly served as a senior New Zealand Labour Party Cabinet minister. He became arguably best-known for his prominent role in the radical economic restructuring undertaken by the Fourth Labour Government during the 1980s...
, which were often blamed for Labour's election loss in 1990. Gradually, as the Labour Party withdrew from "Rogernomics
Rogernomics
The term Rogernomics, a portmanteau of "Roger" and "economics", was coined by journalists at the New Zealand Listener by analogy with Reaganomics to describe the economic policies followed by Roger Douglas after his appointment in 1984 as Minister of Finance in the Fourth Labour Government...
", the Alliance (led by Anderton) reduced its hostility towards Labour, but it was not until shortly before the 1999 election that a formal understanding was reached regarding a possible left-wing coalition. This agreement was deemed a necessary step towards building a credible alternative to the National Party.

Also this is the first time in the country's history where both parties were lead by women and contesting in a general election.

The election took place on 27 November. Less than 84.1% of the 2,509,365 people registered to vote turned out for the election. This was the lowest turnout for some time, although it would drop further in the 2002 elections
New Zealand general election, 2002
The 2002 New Zealand general election was held on 27 July 2002 to determine the composition of the 47th New Zealand Parliament. It saw the reelection of Helen Clark's Labour Party government, as well as the worst-ever performance by the opposition National Party.Arguably the most controversial...
. A total of 679 candidates stood for electorate seats, representing 36 parties. Party lists comprised 760 candidates from 22 parties. The new government was sworn in on 10 December.

Labour Party won 49 seats in parliament. When combined with the ten seats won by the Alliance, the coalition was two seats short of an absolute majority. It was able to form a government with support from the Green Party
Green Party of Aotearoa New Zealand
The Green Party of Aotearoa New Zealand is a political party that has seats in the New Zealand parliament. It focuses firstly on environmentalism, arguing that all other aspects of humanity will cease to be of concern if there is no environment to sustain it...
, which entered parliament for the first time as an independent party (having previously been a part of the Alliance). The Green Party's entry to parliament was by a narrow margin, however - in order to gain seats, it needed to either win 5% of the party vote or win an electorate seat, neither of which the party appeared likely to do. However, when all special votes (that is, votes cast by people who were not able to attend a polling place on the day of the election) were counted, the Greens had narrowly reached not one but both targets - the party's co-leader Jeanette Fitzsimons
Jeanette Fitzsimons
Jeanette Mary Fitzsimons, CNZM is a New Zealand politician and environmentalist. She was the co-leader of the Green Party of Aotearoa New Zealand from 1995 to 2009, and was a Member of Parliament from 1996 to 2010.-Career:...
won the electorate of Coromandel
Coromandel (New Zealand electorate)
Coromandel is a New Zealand electoral division returning one member to the New Zealand House of Representatives. Most recently it was represented by Sandra Goudie, who was MP from until retiring at the .-Population centres:...
, and the party gained 5.16% of the vote.

The National Party, while not performing exceptionally poorly, failed to gain enough support to keep it in power. It won 39 seats, ten fewer than the Labour Party. ACT New Zealand, a potential coalition partner for National, gained nine seats. While this was an increase on ACT's previous achievements, it would not have been sufficient to give National victory. National's former coalition partner, New Zealand First, performed poorly, with voters punishing it for the problems in the last government. The party gained less than 5% of the vote, and so would have been removed from parliament had Winston Peters not retained his electorate of Tauranga
Tauranga
Tauranga is the most populous city in the Bay of Plenty region, in the North Island of New Zealand.It was settled by Europeans in the early 19th century and was constituted as a city in 1963...
(something he did by only 63 votes). None of the MPs who deserted New Zealand First were returned to parliament.

In addition to the registered parties listed above, some groups participated in the election without submitting party lists. Many of these were unregistered parties, lacking the necessary membership numbers for submitting a party list. There were, however, three registered ones that did not, for whatever reason, submit a party list. In total, 14 parties nominated electorate candidates only. By number of votes received, the most significant parties to do this were Te Tawharau
Te Tawharau
Te Tawharau was a Māori political party in New Zealand.Te Tawharau briefly had representation in Parliament when Tuariki Delamere, a former New Zealand First MP, transferred his loyalty to it. In the 1999 elections, Te Tawharau contested electorates under its own banner, but contested the party...
(registered), Mana Wahine Te Ira Tangata
Mana Wahine Te Ira Tangata
Mana Wahine Te Ira Tangata was a small and short-lived political party in New Zealand. It was established by Alamein Kopu, a member of the New Zealand Parliament who had left her original party . After a short time as an independent MP, Kopu established Mana Wahine as her own party...
(registered), the Equal Rights Party (unregistered), the Piri Wiri Tua Movement
Piri Wiri Tua Movement
Piri Wiri Tua Movement is a Māori political party in New Zealand and is based around the Ratana movement. The name "Piri Wiri Tua" was sometimes used by the religion's founder, Tahupotiki Wiremu Ratana, and means The Campaigner...
(unregistered), and the Asia Pacific United Party
Asia Pacific United Party
The Asia Pacific United Party was a New Zealand political party based around the country's Asian and Pacific Islander populations. It was formed in anticipation of the MMP electoral system, which made it easier for smaller parties to be elected. In the 1996 elections, the party won 0.02% of the...
(registered). None of these parties were successful. There were also 36 independent candidates, also unsuccessful. The Mauri Pacific Party, established by a group of defectors from New Zealand First, failed to place even second in the electorates they held. Te Tawharau, which held a seat in parliament thanks to another New Zealand First defector, failed to retain its seat. 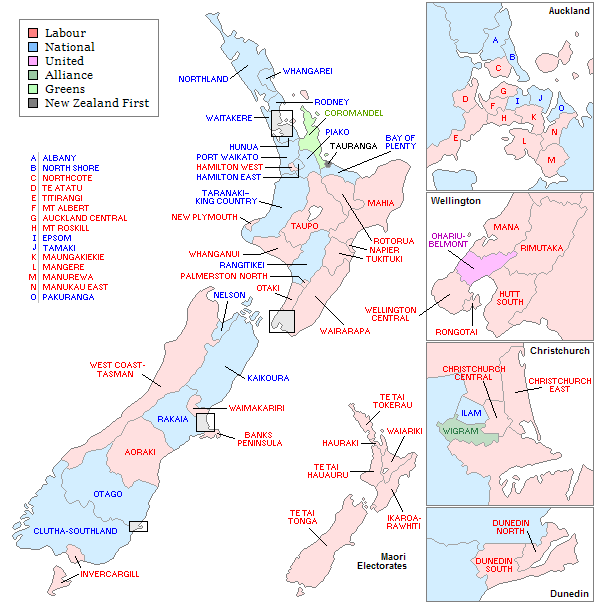 Of the 67 electorates in the 1999 election, a majority (41) were won by the opposition Labour Party. Included in Labour's total are the Maori seats, which it managed to regain after losing them to New Zealand First in the previous election. The governing National Party won 22 electorate seats, slightly less than a third of the total.

Four minor parties managed to win electorate seats. This proved important for some - neither New Zealand First nor United would have entered parliament if not for Winston Peters
Winston Peters
Winston Raymond Peters is a New Zealand politician and leader of New Zealand First, a political party he founded in 1993. Peters has had a turbulent political career since entering Parliament in 1978. He served as Minister of Maori Affairs in the Bolger National Party Government before being...
and Peter Dunne
Peter Dunne
Peter Dunne is a New Zealand politician and Member of Parliament who leads the United Future political party. He has served as a Cabinet minister in governments dominated by the centre-left Labour Party as well as by the centre-right National Party...
retaining their seats. Jim Anderton
Jim Anderton
James Patrick Anderton, usually known as Jim Anderton , is the leader of the Progressive Party, a New Zealand political party. He has served in Parliament since 1984. He served as Deputy Prime Minister from 1999 to 2002 and is currently also the sitting Father of the House, the longest...
also retained his seat. The Greens won their first (and, so far, only) electorate seat when Jeanette Fitzsimons
Jeanette Fitzsimons
Jeanette Mary Fitzsimons, CNZM is a New Zealand politician and environmentalist. She was the co-leader of the Green Party of Aotearoa New Zealand from 1995 to 2009, and was a Member of Parliament from 1996 to 2010.-Career:...
took Coromandel, although since the Greens crossed the 5% threshold, this was of less importance than originally thought.