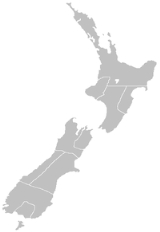 The long title of the Act was "An Act to Grant a Representative Constitution to the Colony of New Zealand". The Act received the Royal Assent
Royal Assent
The granting of royal assent refers to the method by which any constitutional monarch formally approves and promulgates an act of his or her nation's parliament, thus making it a law...
on 30 June 1852.

The New Zealand Company
New Zealand Company
The New Zealand Company originated in London in 1837 as the New Zealand Association with the aim of promoting the "systematic" colonisation of New Zealand. The association, and later the company, intended to follow the colonising principles of Edward Gibbon Wakefield, who envisaged the creation of...
, which was established in 1839, proposed that New Zealand should have representative institutions, and this was consistent with the findings of the Durham Report, which was commissioned during 1838 following minor rebellions in Upper and Lower Canada. The first settlement of the company, Wellington, briefly had its own elected council during 1840, which dissolved itself on the instruction of Lieutenant Governor William Hobson
William Hobson
Captain William Hobson RN was the first Governor of New Zealand and co-author of the Treaty of Waitangi.-Early life:...
. The first New Zealand Constitution Act
New Zealand Constitution Act 1846
The New Zealand Constitution Act 1846 was an Act of the Parliament of the United Kingdom intended to grant self-government to the colony of New Zealand, but it was never fully implemented...
was passed in 1846, though Governor George Grey
George Edward Grey
Sir George Grey, KCB was a soldier, explorer, Governor of South Australia, twice Governor of New Zealand, Governor of Cape Colony , the 11th Premier of New Zealand and a writer.-Early life and exploration:...
was opposed to its proposed division of the country into European and Māori districts. As a result, almost all of the Act was suspended for six years pending the new Act of 1852, the only operative part of the 1846 Act being the creation of New Zealand's first provinces, New Ulster Province and New Munster Province. In the meantime, Grey drafted his own Act which established both provincial and central representative assemblies, allowed for Māori districts and an elected Governor. Only the latter proposal was rejected by the Parliament of the United Kingdom when it adopted Grey's constitution.


By the Act, the provinces had the authority to pass provincial legislation, although the Governor had a reserve power of veto such legislation, and the right of the Crown to disallow provincial Acts within two years of their passage was preserved. Parliament was granted the power to make laws for the "peace order and good government of New Zealand" provided such legislation was not inconsistent with the laws of England.

The first provincial elections were held during 1853. The first Parliament
1st New Zealand Parliament
The 1st New Zealand Parliament was a term of the Parliament of New Zealand. It opened on 24 May 1854, following New Zealand's first general election . It was dissolved on 15 September 1855 in preparation for that year's election...
under the Act met in Auckland
Auckland
The Auckland metropolitan area , in the North Island of New Zealand, is the largest and most populous urban area in the country with residents, percent of the country's population. Auckland also has the largest Polynesian population of any city in the world...
in May 1854. This session was concerned primarily with the issue of responsible government, or the ability of the Colonial parliament instead of the Governor to appoint its own ministers. Prior to the Act, the Executive Council consisted of Crown servants who were responsible to the Governor. A motion was passed almost unanimously affirming the ability of Parliament to appoint its own Executive Council members. Three members of the Assembly (and later one from the Legislative Council) were added to the Executive Council as ministers without portfolio. The unofficial members soon resigned.

However, the General Assembly did not have total control of the executive. The Governor retained reserve powers to disallow legislation and there was the authority of the Crown to disallow legislation even after the Governor had given his assent. These powers of reservation and disallowance
Disallowance and reservation
Disallowance and reservation are constitutional powers that theoretically exist in certain Commonwealth realms to delay or overrule legislation. Originally created to retain the Crown's authority over colonial authorities across the British Empire, these powers are now generally obsolete, or have...
were prerogative powers included in the Act. This power was limited by the Balfour Declaration
Balfour Declaration 1926
The Balfour Declaration of 1926, a report resulting from the 1926 Imperial Conference of British Empire leaders in London, was named after the British statesman Arthur Balfour, first Earl of Balfour, Lord President of the Council and a previous Prime Minister of the United Kingdom...
of 1926, in that they were to be exercised only on the advice of New Zealand ministers. The powers were not continued by the 1986 Constitution Act.

Section 71 of the Act allowed for "Māori districts" where Māori law and custom were to be preserved, but this section was never implemented by the Crown. It was, however, used by the Kingitanga to justify claims of Māori self-governance during the 1870s and 1880s.

The first amendment to the Act was made by the British Parliament during 1857. This amendment granted the New Zealand General Assembly the ability to amend or repeal all of the provisions of the Constitution Act except provisions such as the establishment of the General Assembly itself and the extent of its legislative powers.

A number of important amendments were made to the Act by the New Zealand Parliament:

The Act was repealed by section 28 of the Constitution Act 1986. By the time of its repeal, only 18 of the Act's original 82 sections remained, of which a number were regarded as no longer effective.
The source of this article is wikipedia, the free encyclopedia.  The text of this article is licensed under the GFDL.