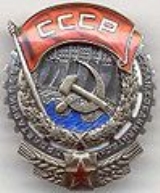 Order of the Red Banner of Labour
Topic Home
Discussion
0

Encyclopedia
The Order of the Red Banner of Labour was an order
Order (decoration)
An order or order of merit is a visible honour, awarded by a government, dynastic house or international organization to an individual, usually in recognition of distinguished service to a nation or to humanity. The distinction between orders and decorations is somewhat vague, except that most...
of the Soviet Union
Soviet Union
The Soviet Union , officially the Union of Soviet Socialist Republics , was a constitutionally socialist state that existed in Eurasia between 1922 and 1991....
for accomplishments in labour
Wage labour
Wage labour is the socioeconomic relationship between a worker and an employer, where the worker sells their labour under a formal or informal employment contract. These transactions usually occur in a labour market where wages are market determined...
and civil service
Civil service
The term civil service has two distinct meanings:* A branch of governmental service in which individuals are employed on the basis of professional merit as proven by competitive examinations....
. It is the labour counterpart of the military Order of the Red Banner
Order of the Red Banner
The Soviet government of Russia established the Order of the Red Banner , a military decoration, on September 16, 1918 during the Russian Civil War...
. A few institutions and factories, being the pride of Soviet Union, also received the order.

The Red Banner of Labour began as an order of the Russian SFSR on December 28, 1920. The statute establishing the all-Union equivalent was passed on September 7, 1928.

The order consisted of a silver badge in the shape of a cogwheel
Gear
A gear is a rotating machine part having cut teeth, or cogs, which mesh with another toothed part in order to transmit torque. Two or more gears working in tandem are called a transmission and can produce a mechanical advantage through a gear ratio and thus may be considered a simple machine....
bearing the motto "Proletarians
Proletariat
The proletariat is a term used to identify a lower social class, usually the working class; a member of such a class is proletarian...
of the World, Unite!" in Russian. The central disc had the golden "hammer and sickle
Hammer and sickle
The hammer and sickle is a part of communist symbolism and its usage indicates an association with Communism, a Communist party, or a Communist state. It features a hammer and a sickle overlapping each other. The two tools are symbols of the industrial proletariat and the peasantry; placing them...
" emblem superimposed on a dam
Dam
A dam is a barrier that impounds water or underground streams. Dams generally serve the primary purpose of retaining water, while other structures such as floodgates or levees are used to manage or prevent water flow into specific land regions. Hydropower and pumped-storage hydroelectricity are...
scene with blue enamel water, and was surrounded by a wreath of oak leaves. Above it was a red banner
Red flag
In politics, a red flag is a symbol of Socialism, or Communism, or sometimes left-wing politics in general. It has been associated with left-wing politics since the French Revolution. Socialists adopted the symbol during the Revolutions of 1848 and it became a symbol of communism as a result of its...
bearing the Russian initials "СССР" (USSR), and below was a red star
Red star
A red star, five-pointed and filled, is an important ideological and religious symbol which has been used for various purposes, such as: state emblems, flags, monuments, ornaments, and logos.- Symbol of communism :...
flanked by golden panicle
Panicle
A panicle is a compound raceme, a loose, much-branched indeterminate inflorescence with pedicellate flowers attached along the secondary branches; in other words, a branched cluster of flowers in which the branches are racemes....
s of wheat
Wheat
Wheat is a cereal grain, originally from the Levant region of the Near East, but now cultivated worldwide. In 2007 world production of wheat was 607 million tons, making it the third most-produced cereal after maize and rice...
.

It was originally worn as a badge on the left chest, but was later suspended from a light blue ribbon bearing dark blue stripes on the edges.

The first recipient of the Order of the Red Banner of Labour of the RSFSR was Nikita Menchukov for saving an important bridge from being destroyed by flowing ice.

Order of the Red Banner of Labour of the USSR number 1 was presented to the Putilov
Kirov Plant
The Kirov Plant Kirov Factory or Leningrad Kirov Plant is a major Russian machine-building plant in St. Petersburg, Russia....
(later Kirov) Works in Leningrad (now St. Petersburg). The first individual awardees were V. Fedetov, A. Shelagin and M Kyatkovsky for the rescue of a polar expedition.

Mikhail Gorbachev
Mikhail Gorbachev
Mikhail Sergeyevich Gorbachev is a former Soviet statesman, having served as General Secretary of the Communist Party of the Soviet Union from 1985 until 1991, and as the last head of state of the USSR, having served from 1988 until its dissolution in 1991...
received the Order of the Red Banner of Labour for harvesting a record crop on his family's collective farm
Collective farming
Collective farming and communal farming are types of agricultural production in which the holdings of several farmers are run as a joint enterprise...
in 1947 at age 16, an honour which was very rare for someone so young. He is one of the Order's youngest recipients.