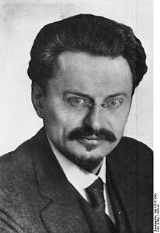 Overview
Leon Trotsky born Lev Davidovich Bronshtein, was a Russian Marxist revolutionary and theorist, Soviet politician, and the founder and first leader of the Red Army
Red Army
The Workers' and Peasants' Red Army started out as the Soviet Union's revolutionary communist combat groups during the Russian Civil War of 1918-1922. It grew into the national army of the Soviet Union. By the 1930s the Red Army was among the largest armies in history.The "Red Army" name refers to...
.

How and why did Trotsky split with Lenin?

Learning carries within itself certain dangers because out of necessity one has to learn from one's enemies.

The struggle against war, properly understood and executed, presupposes the uncompromising hostility of the proletariat and its organizations, always and everywhere, toward its own and every other imperialist bourgeoisie...

"Resolution on the Antiwar Congress of the London Bureau" (July 1936)

The struggle against war and its social source, capitalism, presupposes direct, active, unequivocal support to the oppressed colonial peoples in their struggles and wars against imperialism. A 'neutral' position is tantamount to support of imperialism.

"Resolution on the Antiwar Congress of the London Bureau" (July 1936)

As for us, we were never concerned with the Kantian-priestly and vegetarian-Quaker prattle about the "sacredness of human life."

The road to socialism lies through a period of the highest possible intensification of the principle of the state … Just as a lamp, before going out, shoots up in a brilliant flame, so the state, before disappearing, assumes the form of the dictatorship of the proletariat, i.e., the most ruthless form of state, which embraces the life of the citizens authoritatively in every direction...