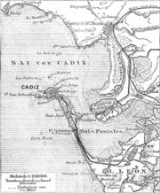 Encyclopedia
The Battle of Trocadero, fought on 31 August 1823, was the only significant battle in the French invasion of Spain when French forces defeated the Spanish liberal forces and restored the absolute rule of King Ferdinand VII.

After the downfall of Napoleon Bonaparte, King Ferdinand VII of Spain refused to adopt the liberal Spanish Constitution of 1812
Spanish Constitution of 1812
The Spanish Constitution of 1812 was promulgated 19 March 1812 by the Cádiz Cortes, the national legislative assembly of Spain, while in refuge from the Peninsular War...
and in 1820 faced a rebellion in favour of a constitutional monarchy
Constitutional monarchy
Constitutional monarchy is a form of government in which a monarch acts as head of state within the parameters of a constitution, whether it be a written, uncodified or blended constitution...
, led by Rafael del Riego y Nuñez.
The King was captured and detained at Cádiz
Cádiz
Cadiz is a city and port in southwestern Spain. It is the capital of the homonymous province, one of eight which make up the autonomous community of Andalusia....
, where the Cortes
Cortes Generales
The Cortes Generales is the legislature of Spain. It is a bicameral parliament, composed of the Congress of Deputies and the Senate . The Cortes has power to enact any law and to amend the constitution...
, the Spanish parliament assembled. Alarmed by these events, the other European powers convened in October 1822 at the Congress of Verona
Congress of Verona
The Congress of Verona met at Verona on October 20, 1822 as part of the series of international conferences or congresses that opened with the Congress of Vienna in 1814-15, which had instituted the Concert of Europe at the close of the Napoleonic Wars....
and authorized France to intervene in the conflict and restore the rule of Ferdinand, with only Britain abstaining from that decision. 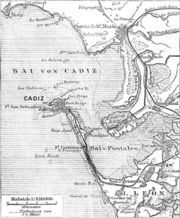 On 17 April 1823, French forces led by Louis-Antoine, Duke of Angoulême
Louis-Antoine, Duke of Angouleme
Louis Antoine of France, Duke of Angoulême was the eldest son of Charles X of France and, from 1824 to 1836, the last Dauphin of France...
, son of the future Charles X
Charles X of France
Charles X was known for most of his life as the Comte d'Artois before he reigned as King of France and of Navarre from 16 September 1824 until 2 August 1830. A younger brother to Kings Louis XVI and Louis XVIII, he supported the latter in exile and eventually succeeded him...
, crossed the Pyrenees
Pyrenees
The Pyrenees is a range of mountains in southwest Europe that forms a natural border between France and Spain...
into Spain. Among those fighting with him was Carlo Alberto, Prince of Carignano, soon to be King of Sardinia
Sardinia
Sardinia is the second-largest island in the Mediterranean Sea . It is an autonomous region of Italy, and the nearest land masses are the French island of Corsica, the Italian Peninsula, Sicily, Tunisia and the Spanish Balearic Islands.The name Sardinia is from the pre-Roman noun *sard[],...
.

The French forces were welcomed by the Basques and in Catalonia. The duke dispatched a force to besiege San Sebastian
San Sebastián
Donostia-San Sebastián is a city and municipality located in the north of Spain, in the coast of the Bay of Biscay and 20 km away from the French border. The city is the capital of Gipuzkoa, in the autonomous community of the Basque Country. The municipality’s population is 186,122 , and its...
while he launched an attack on Madrid, held by the rebel government, which on 23 May withdrew to Seville, Madrid's military commander secretly surrendered and fled to France, and the leaderless Madrid garrison could not keep out the French, who seized the city and installed a regent, pending Ferdinand's expected return.

The French moved south to besiege the rebels at Cádiz
Cádiz
Cadiz is a city and port in southwestern Spain. It is the capital of the homonymous province, one of eight which make up the autonomous community of Andalusia....
. The French besieged the fort of Trocadero
Isla del Trocadero
Isla del Trocadero is an island in the Bay of Cádiz, in Andalusia, Spain.-Situation:The island has an area of 5.25 km² and lies in Southern part of the Bay of Cádiz, Southwest of Puerto Real village....
, which controlled the access to the city. On 31 August 1823 they launched a surprise bayonet attack from the seaside, using the low tide, and took the fort. There were 400 French casualties and 500 to 600 Spanish, one-third of the garrison.

Cádiz itself held out for three weeks despite bombardments, but was forced to surrender on 23 September 1823 and King Ferdinand was handed over to the French. Despite a prior promise of amnesty, the king ordered reprisals against the rebels. The following years, an estimated 30,000 people were executed and 20,000 imprisoned.

The Battle of Trocadero was one of the events that triggered the United States of America to proclaim the Monroe Doctrine
Monroe Doctrine
The Monroe Doctrine is a policy of the United States introduced on December 2, 1823. It stated that further efforts by European nations to colonize land or interfere with states in North or South America would be viewed as acts of aggression requiring U.S. intervention...
on 2 December 1823, to safeguard the Americas
Americas
The Americas, or America , are lands in the Western hemisphere, also known as the New World. In English, the plural form the Americas is often used to refer to the landmasses of North America and South America with their associated islands and regions, while the singular form America is primarily...
against intervention by European powers.

The fall of Trocadero was commemorated in Paris, with the Place du Trocadéro
Trocadéro
The Trocadéro, , site of the Palais de Chaillot, , is an area of Paris, France, in the 16th arrondissement, across the Seine from the Eiffel Tower. The hill of the Trocadéro is the hill of Chaillot, a former village.- Origin of the name :...
, where the city was expanding to the edges of the Bois de Boulogne
Bois de Boulogne
The Bois de Boulogne is a park located along the western edge of the 16th arrondissement of Paris, near the suburb of Boulogne-Billancourt and Neuilly-sur-Seine...
. Louis-Antoine, Duke of Angoulême
Louis-Antoine, Duke of Angouleme
Louis Antoine of France, Duke of Angoulême was the eldest son of Charles X of France and, from 1824 to 1836, the last Dauphin of France...
, the victor of the battle, was honoured with the title "Prince of Trocadero".

In Les Misérables
Les Misérables
Les Misérables , translated variously from the French as The Miserable Ones, The Wretched, The Poor Ones, The Wretched Poor, or The Victims), is an 1862 French novel by author Victor Hugo and is widely considered one of the greatest novels of the nineteenth century...
, Victor Hugo
Victor Hugo
Victor-Marie Hugo was a Frenchpoet, playwright, novelist, essayist, visual artist, statesman, human rights activist and exponent of the Romantic movement in France....
devoted a long aside on the battle (Volume II, Book 2, chapter 3), in which he called the battle "a fine military action" but criticized the French intervention as "undoing by her arms that which she had done by her mind" and an "outrage on the generous Spanish nation ... at the same time, an outrage on the French Revolution." He also argued that the successful campaign was "fatal" to the Bourbons, as it encouraged reactionary forces to re-establish absolutism not only in Spain but also at home, which in turn provoked the July Revolution
July Revolution
The French Revolution of 1830, also known as the July Revolution or in French, saw the overthrow of King Charles X of France, the French Bourbon monarch, and the ascent of his cousin Louis-Philippe, Duke of Orléans, who himself, after 18 precarious years on the throne, would in turn be overthrown...
of 1830.