Encyclopedia
The Russo–Turkish War of 1828–1829 was sparked by the Greek War of Independence
Greek War of Independence
The Greek War of Independence, also known as the Greek Revolution was a successful war of independence waged by the Greek revolutionaries between...
. The war broke out after the Sultan
Sultan
Sultan is a title with several historical meanings. Originally, it was an Arabic language abstract noun meaning "strength", "authority", "rulership", and "dictatorship", derived from the masdar سلطة , meaning "authority" or "power". Later, it came to be used as the title of certain rulers who...
, incensed by the Russia
Russia
Russia or , officially known as both Russia and the Russian Federation , is a country in northern Eurasia. It is a federal semi-presidential republic, comprising 83 federal subjects...
n participation in the Battle of Navarino
Battle of Navarino
The naval Battle of Navarino was fought on 20 October 1827, during the Greek War of Independence in Navarino Bay , on the west coast of the Peloponnese peninsula, in the Ionian Sea. A combined Ottoman and Egyptian armada was destroyed by a combined British, French and Russian naval force...
, closed the Dardanelles
Dardanelles
The Dardanelles , formerly known as the Hellespont, is a narrow strait in northwestern Turkey connecting the Aegean Sea to the Sea of Marmara. It is one of the Turkish Straits, along with its counterpart the Bosphorus. It is located at approximately...
for Russian ships and revoked the Akkerman Convention
Akkerman Convention
The Akkerman Convention was a treaty signed on October 7, 1826 between the Russian and the Ottoman Empires in the Budjak citadel of Akkerman . It imposed that the hospodars of Moldavia and Wallachia be elected by their respective Divans for seven-year terms, with the approval of both Powers...
.

When the hostilities erupted, the Russian army consisted of 92,000 men, as opposed to the Ottoman forces commanded by Hussein Pasha. In June 1828, the main Russian forces, led by Emperor Nicholas I, crossed the Danube
Danube
The Danube is a river in the Central Europe and the Europe's second longest river after the Volga. It is classified as an international waterway....
and advanced into Dobruja
Dobruja
Dobruja is a historical region shared by Bulgaria and Romania, located between the lower Danube river and the Black Sea, including the Danube Delta, Romanian coast and the northernmost part of the Bulgarian coast...
. Prior to that in April- May 1828, the Russian commander-in-chief, Prince Peter Wittgenstein
Peter Wittgenstein
Ludwig Adolph Peter, Prince Wittgenstein was a Russian Field Marshal distinguished for his services in the Napoleonic wars.-Life:...
, had moved into Rumanian Principates Wallachia
Wallachia
Wallachia or Walachia is a historical and geographical region of Romania. It is situated north of the Danube and south of the Southern Carpathians...
and Moldavia
Moldavia
Moldavia is a geographic and historical region and former principality in Eastern Europe, corresponding to the territory between the Eastern Carpathians and the Dniester river...
and occupied them.

Then the Russians laid prolonged sieges to three key Ottoman citadels in present-day Bulgaria
Bulgaria
Bulgaria , officially the Republic of Bulgaria , is a parliamentary democracy within a unitary constitutional republic in Southeast Europe. The country borders Romania to the north, Serbia and Macedonia to the west, Greece and Turkey to the south, as well as the Black Sea to the east...
— Shumla, Varna
Varna
Varna is the largest city and seaside resort on the Bulgarian Black Sea Coast and third-largest in Bulgaria after Sofia and Plovdiv, with a population of 334,870 inhabitants according to Census 2011...
, and Silistra
Silistra
Silistra is a port city of northeastern Bulgaria, lying on the southern bank of the lower Danube at the country's border with Romania. Silistra is the administrative centre of Silistra Province and one of the important cities of the historical region of Southern Dobrudzha...
. Owing to the help of the Black Sea Fleet
Black Sea Fleet
The Black Sea Fleet is a large operational-strategic sub-unit of the Russian Navy, operating in the Black Sea and the Mediterranean Sea since the late 18th century. It is based in various harbors of the Black Sea and the Sea of Azov....
under Aleksey Greig, Varna was the first to be taken
Siege of Varna
Siege of Varna was a war episode during the Russo-Turkish War, 1828-1829.Varna was held by the Ottoman army...
(September 29). The siege of Shumla proved much more problematic, as the 40,000-strong Ottoman garrison outnumbered the Russian forces. Furthermore, the Ottomans succeeded in cutting the Russians from supplies of provisions. The resultant famine and proliferation of diseases claimed more lives than all the hostilities undertaken during the war.

As winter approached, the Russian army was constrained to leave Shumla and retreat back to Bessarabia
Bessarabia
Bessarabia is a historical term for the geographic region in Eastern Europe bounded by the Dniester River on the east and the Prut River on the west....
. In February 1829 old Wittgenstein, whose cautiousness bordered on timidity, was replaced by more energetic Hans Karl von Diebitsch
Hans Karl von Diebitsch
Count Hans Karl Friedrich Anton von Diebitsch und Narden was a German-born soldier serving as Russian Field Marshal....
, while the tsar left the army for St Petersburg. On May 7, 60,000 soldiers led by Field Marshal Diebitsch crossed the Danube and resumed the siege of Silistra. The Sultan sent a 40,000-strong contingent to the relief of Varna
Varna
Varna is the largest city and seaside resort on the Bulgarian Black Sea Coast and third-largest in Bulgaria after Sofia and Plovdiv, with a population of 334,870 inhabitants according to Census 2011...
, but the latter was annihilated by Diebitsch in the Battle of Kulevicha
Battle of Kulevicha
The Battle of Kulevicha, also known as the Battle of Kulewtscha, was fought during the Russo-Turkish War, 1828-1829 on June 11, 1829 between Russia and the Ottoman Empire....
(May 30). Within several weeks, Silistra fell to the Russians (June 19). 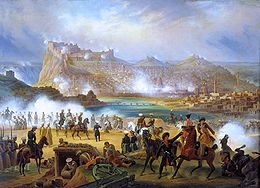 Simultaneously, Ivan Paskevich
Ivan Paskevich
Ivan Fyodorovich Paskevich was a Ukrainian-born military leader. For his victories, he was made Count of Erivan in 1828 and Namestnik of the Kingdom of Poland in 1831...
, operating on the Caucasian front, took Ahıska
Battle of Akhalzic
The Battle of Akhalzic may refer to one of the following:*A battle under the walls of Akhaltsikhe during the Russo-Turkish War, 1828-1829 on August 9 between 9,000 Russians under Field-Marshal Paskevich and 30,000 Turks under Kios-Mahomet-Pasha...
, Erivan (from Persia), and Kars
Kars
Kars is a city in northeast Turkey and the capital of Kars Province. The population of the city is 73,826 as of 2010.-Etymology:As Chorzene, the town appears in Roman historiography as part of ancient Armenia...
and, accompanied by the poet Alexander Pushkin, seized Erzerum in north-eastern Anatolia
Anatolia
Anatolia is a geographic and historical term denoting the westernmost protrusion of Asia, comprising the majority of the Republic of Turkey...
, thus marking the 120th anniversary of the Poltava
Battle of Poltava
The Battle of Poltava on 27 June 1709 was the decisive victory of Peter I of Russia over the Swedish forces under Field Marshal Carl Gustav Rehnskiöld in one of the battles of the Great Northern War. It is widely believed to have been the beginning of Sweden's decline as a Great Power; the...
(June 27).

On July 2 Diebitsch startled the Turks by launching a Transbalkan offensive, the first in Russian history since the 10th-century campaigns of Svyatoslav I. The contingent of 35,000 Russians moved across the mountains, circumventing the besieged Shumla on their way straight to Constantinople
Constantinople
Constantinople was the capital of the Roman, Eastern Roman, Byzantine, Latin, and Ottoman Empires. Throughout most of the Middle Ages, Constantinople was Europe's largest and wealthiest city.-Names:...
. Burgas
Burgas
-History:During the rule of the Ancient Romans, near Burgas, Debeltum was established as a military colony for veterans by Vespasian. In the Middle Ages, a small fortress called Pyrgos was erected where Burgas is today and was most probably used as a watchtower...
fell ten days later, and the Turkish reinforcement was routed near Sliven
Sliven
Sliven is the eighth-largest city in Bulgaria and the administrative and industrial centre of Sliven Province and municipality. It is a relatively large town with 89,848 inhabitants, as of February 2011....
on July 31. By August 28, Diebitsch advanced within 68 kilometers of Istanbul, causing panic on the streets of the capital. The Russian army caused much plundering and destruction on its path, an English traveller Sir Adolphus Slade wrote:

"In some mud cabins, hard by Yeni Bazar, an advanced post of Cossacks was lodged, in great distress for want of necessaries, which they were obliged to draw from Varna, two days distance. All Bulgaria they informed me, was in the same state, not a house standing, thus confirming what a Russian officer had before told me "the Turks did some damage, but we levelled all" The reason of their wanton destruction is difficult to understand, especially among people whom they were pleased to call co-religionists, allies,&c., but whom they treated worse than serfs. Pravodi, for example, a Christian place, they levelled to the ground, although it was not attacked. The adage, " where the Spahis' hoofs tread, the grass will not grow," may be applied with more reason to the Cossacks."

The Sultan had no other choice but to sue for peace, which was concluded in Edirne
Edirne
Edirne is a city in Eastern Thrace, the northwestern part of Turkey, close to the borders with Greece and Bulgaria. Edirne served as the capital city of the Ottoman Empire from 1365 to 1453, before Constantinople became the empire's new capital. At present, Edirne is the capital of the Edirne...
on September 14, 1829. The Treaty of Adrianople
Treaty of Adrianople
The Peace Treaty of Adrianople concluded the Russo-Turkish War, 1828-1829 between Russia and the Ottoman Empire. It was signed on September 14, 1829 in Adrianople by Russia's Count Alexey Fyodorovich Orlov and by Turkey's Abdul Kadyr-bey...
gave Russia most of the eastern shore of the Black Sea
Black Sea
The Black Sea is bounded by Europe, Anatolia and the Caucasus and is ultimately connected to the Atlantic Ocean via the Mediterranean and the Aegean seas and various straits. The Bosphorus strait connects it to the Sea of Marmara, and the strait of the Dardanelles connects that sea to the Aegean...
and the mouth of the Danube
Danube
The Danube is a river in the Central Europe and the Europe's second longest river after the Volga. It is classified as an international waterway....
. Turkey recognized Russian sovereignty over Georgia
Georgia (country)
Georgia is a sovereign state in the Caucasus region of Eurasia. Located at the crossroads of Western Asia and Eastern Europe, it is bounded to the west by the Black Sea, to the north by Russia, to the southwest by Turkey, to the south by Armenia, and to the southeast by Azerbaijan. The capital of...
and parts of present-day Armenia
Armenia
Armenia , officially the Republic of Armenia , is a landlocked mountainous country in the Caucasus region of Eurasia...
. Serbia
Serbia
Serbia , officially the Republic of Serbia , is a landlocked country located at the crossroads of Central and Southeast Europe, covering the southern part of the Carpathian basin and the central part of the Balkans...
achieved autonomy and Russia was allowed to occupy Moldavia
Moldavia
Moldavia is a geographic and historical region and former principality in Eastern Europe, corresponding to the territory between the Eastern Carpathians and the Dniester river...
and Walachia (guaranteeing their prosperity, and full "liberty of trade" for them) until Turkey had paid a large indemnity. The Straits Question was settled four years later, when both powers signed the Treaty of Unkiar Skelessi.
The source of this article is wikipedia, the free encyclopedia.  The text of this article is licensed under the GFDL.