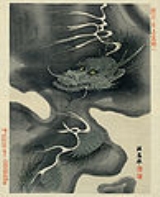 A dragon is a legendary creature
Legendary creature
A legendary creature is a mythological or folkloric creature.-Origin:Some mythical creatures have their origin in traditional mythology and have been believed to be real creatures, for example the dragon, the unicorn, and griffin...
, typically with serpentine
Serpentine shape
Serpentine refers to the curved shape of an object or design which resembles the letter s, a sine wave or a snake; the latter is the derivation of the term.- Examples :* The Serpentine River...
or reptilian
Reptile
Reptiles are members of a class of air-breathing, ectothermic vertebrates which are characterized by laying shelled eggs , and having skin covered in scales and/or scutes. They are tetrapods, either having four limbs or being descended from four-limbed ancestors...
traits, that feature in the myths
Mythology
The term mythology can refer either to the study of myths, or to a body or collection of myths. As examples, comparative mythology is the study of connections between myths from different cultures, whereas Greek mythology is the body of myths from ancient Greece...
of many cultures. There are two distinct cultural traditions of dragons: the European dragon
European dragon
European dragons are legendary creatures in folklore and mythology among the overlapping cultures of Europe.In European folklore, a dragon is a serpentine legendary creature. The Latin word draco, as in constellation Draco, comes directly from Greek δράκων,...
, derived from European folk traditions and ultimately related to Greek and Middle Eastern mythologies, and the Chinese dragon
Chinese dragon
Chinese dragons are legendary creatures in Chinese mythology and folklore, with mythic counterparts among Japanese, Korean, Vietnamese, Bhutanese, Western and Turkic dragons. In Chinese art, dragons are typically portrayed as long, scaled, serpentine creatures with four legs...
, with counterparts in Japan, Korea and other East Asian countries.

The two traditions may have evolved separately, but have influenced each to a certain extent, particularly with the cross-cultural contact of recent centuries.

What are the characteristic features of dragons?

Is there proof of dragons anywhere that is conclusive

Are there any particular variants of dragons that are commonly depicted?

Where has the legend of dragions come from?

Are dragons considered to be dangerous?
More
x