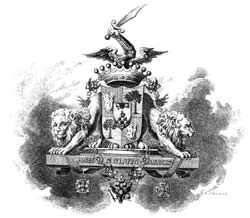 The Rumyantsev family () were Russian count
Count
A count or countess is an aristocratic nobleman in European countries. The word count came into English from the French comte, itself from Latin comes—in its accusative comitem—meaning "companion", and later "companion of the emperor, delegate of the emperor". The adjective form of the word is...
s prominent in Russian imperial politics in the 18th and early 19th centuries. The family claimed descent from the boyar
Boyar
A boyar, or bolyar , was a member of the highest rank of the feudal Moscovian, Kievan Rus'ian, Bulgarian, Wallachian, and Moldavian aristocracies, second only to the ruling princes , from the 10th century through the 17th century....
Rumyanets who broke his oath of allegiance and surrendered Nizhny Novgorod
Nizhny Novgorod
Nizhny Novgorod , colloquially shortened to Nizhny, is, with the population of 1,250,615, the fifth largest city in Russia, ranking after Moscow, St. Petersburg, Novosibirsk, and Yekaterinburg...
to Vasily I of Moscow
Vasili I of Russia
Vasiliy I Dmitriyevich was Grand Prince of Moscow from 1389.He was the oldest son of Dmitri Donskoi and Grand Princess Eudoxia, daughter of Grand Prince Dmitry Konstantinovich of Nizhny Novgorod.-Domestic policy:...
in 1391.

The first Rumyantsev to gain prominence, Alexander Ivanovich
Alexander Rumyantsev
Count Alexander Ivanovich Rumyantsev was an assistant of Peter the Great and father of Field Marshal Peter Rumyantsev-Zadunaisky. He came from the Rumyantsev family which, though little known and documented in the 17th century, later claimed descent from a prominent 14th-century boyar.Alexander...
(1680–1749), served as ordinary of Peter the Great
Peter I of Russia
Peter the Great, Peter I or Pyotr Alexeyevich Romanov Dates indicated by the letters "O.S." are Old Style. All other dates in this article are New Style. ruled the Tsardom of Russia and later the Russian Empire from until his death, jointly ruling before 1696 with his half-brother, Ivan V...
in the Preobrazhensky regiment
Preobrazhensky regiment
The Preobrazhensky Regiment was one of the oldest and elite regiments of the Russian army. Along with the Semenovsky regiment also served as a gendarmie unit for the state Secret Chancellery in the 18th century, headed by the Prince Fyodor Romodanovsky.It was formed by Peter the Great in the late...
. In 1720 he married Countess Maria Matveyeva, daughter and heiress of Count Andrey Matveyev
Andrey Matveyev
Count Andrey Artamonovich Matveev was a Russian statesman of the Petrine epoch best remembered as one of the first Russian ambassadors and Peter the Great's agent in London and the Hague....
. Peter's daughter Elizabeth recalled Rumyantsev to active service and made him a hereditary count as well as Governor of Kiev
Kiev
Kiev or Kyiv is the capital and the largest city of Ukraine, located in the north central part of the country on the Dnieper River. The population as of the 2001 census was 2,611,300. However, higher numbers have been cited in the press....
.

Their son Pyotr Alexandrovich
Pyotr Rumyantsev
Count Pyotr Alexandrovich Rumyantsev-Zadunaisky was one of the foremost Russian generals of the 18th century. He governed Little Russia in the name of Empress Catherine the Great from the abolition of the Cossack Hetmanate in 1764 until Catherine's death 32 years later...
(1725-96) took his name from that of the ruling Emperor and was rumored to have been his natural son. In 1761 he besieged and took the Prussian fortress of Kolberg
Kolobrzeg
Kołobrzeg is a city in Middle Pomerania in north-western Poland with some 50,000 inhabitants . Kołobrzeg is located on the Parsęta River on the south coast of the Baltic Sea...
, thus clearing for Russian armies the path to Berlin
Berlin
Berlin is the capital city of Germany and is one of the 16 states of Germany. With a population of 3.45 million people, Berlin is Germany's largest city. It is the second most populous city proper and the seventh most populous urban area in the European Union...
. During Catherine II's reign he served as Governor General of Little Russia
Little Russia
Little Russia , sometimes Little or Lesser Rus’ , is a historical political and geographical term in the Russian language referring to most of the territory of modern-day Ukraine before the 20th century. It is similar to the Polish term Małopolska of the Polish-Lithuanian Commonwealth...
, or Ukraine
Ukraine
Ukraine is a country in Eastern Europe. It has an area of 603,628 km², making it the second largest contiguous country on the European continent, after Russia...
. After crossing the Danube River into Bulgaria
Bulgaria
Bulgaria , officially the Republic of Bulgaria , is a parliamentary democracy within a unitary constitutional republic in Southeast Europe. The country borders Romania to the north, Serbia and Macedonia to the west, Greece and Turkey to the south, as well as the Black Sea to the east...
and signing the advantageous Treaty of Küçük Kaynarca
Treaty of Kucuk Kaynarca
The Treaty of Küçük Kaynarca was signed on 21 July 1774, in Küçük Kaynarca , Dobruja between the Russian Empire and the Ottoman Empire after the Ottoman Empire was defeated in the...
with the Turks in 1774, Rumyantsev was promoted Field Marshal
Field Marshal
Field Marshal is a military rank. Traditionally, it is the highest military rank in an army.-Etymology:The origin of the rank of field marshal dates to the early Middle Ages, originally meaning the keeper of the king's horses , from the time of the early Frankish kings.-Usage and hierarchical...
and was given the victory title
Victory title
A victory title is an honorific title adopted by a successful military commander to commemorate his defeat of an enemy nation. This practice was first used by Ancient Rome and is still most commonly associated with the Romans, but it has also been adopted as a practice by many modern empires,...
of Zadunaisky (literally, "Transdanubian").

His sister, Praskovja Bruce (1729–85), was the confidant and lady-in-waiting of Catherine the great, who entrusted her with her private affairs and was known in history as the so called "l'eprovéuse".

During the Napoleonic wars
Napoleonic Wars
The Napoleonic Wars were a series of wars declared against Napoleon's French Empire by opposing coalitions that ran from 1803 to 1815. As a continuation of the wars sparked by the French Revolution of 1789, they revolutionised European armies and played out on an unprecedented scale, mainly due to...
, Zadunaisky's son Nikolay Petrovich
Nikolay Rumyantsev
Count Nikolai Petrovich Rumyantsev was Russia's Foreign Minister and Imperial Chancellor in the run-up to Napoleon's invasion of Russia...
(1754–1826) held the highest offices of state, including those of Minister of Commerce (1802–11), President of the State Council
State Council of Imperial Russia
The State Council was the supreme state advisory body to the Tsar in Imperial Russia.-18th century:Early Tsars' Councils were small and dealt primarily with the external politics....
(1810–12), Foreign Minister (1808–12), and Chancellor of the Russian Empire. On receiving the news of Napoleon's invasion of Russia (1812), he suffered a stroke and lost his hearing. He died childless, and the family went extinct soon thereafter.
The source of this article is wikipedia, the free encyclopedia.  The text of this article is licensed under the GFDL.