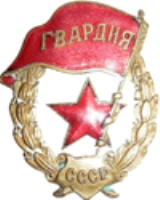 Encyclopedia
Guards or Guards units were and are elite military units in Imperial Russia, Soviet Union
Soviet Union
The Soviet Union , officially the Union of Soviet Socialist Republics , was a constitutionally socialist state that existed in Eurasia between 1922 and 1991....
and the Russian Federation. The tradition goes back to the retinue of a knyaz (his druzhina
Druzhina
Druzhina, Drużyna or Družyna in the medieval history of Slavic Europe was a retinue in service of a chieftain, also called knyaz. The name is derived from the Slavic word drug with the meaning of "companion, friend". -Early Rus:...
) of medieval Kievan Rus'
Kievan Rus'
Kievan Rus was a medieval polity in Eastern Europe, from the late 9th to the mid 13th century, when it disintegrated under the pressure of the Mongol invasion of 1237–1240....
and the streltsy
Streltsy
Streltsy were the units of Russian guardsmen in the 16th - early 18th centuries, armed with firearms. They are also collectively known as Marksman Troops .- Origins and organization :...
, the Muscovite
Grand Duchy of Moscow
The Grand Duchy of Moscow or Grand Principality of Moscow, also known in English simply as Muscovy , was a late medieval Rus' principality centered on Moscow, and the predecessor state of the early modern Tsardom of Russia....
harquebusiers formed by Ivan the Terrible by 1550. The exact meaning of the term "Guards" varied over the time. 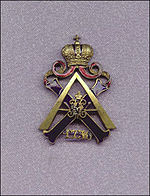 In the Russian Empire, Imperial Russian Guard units ("Leib-Guards") derived from German 'Leibwächter' (body-guards), and were intended to provide for the security of the sovereign, initially that of Peter the Great
Peter I of Russia
Peter the Great, Peter I or Pyotr Alexeyevich Romanov Dates indicated by the letters "O.S." are Old Style. All other dates in this article are New Style. ruled the Tsardom of Russia and later the Russian Empire from until his death, jointly ruling before 1696 with his half-brother, Ivan V...
in 1690s based on the Prussian practice. At the beginning of the twentieth century it consisted of 13 infantry
Infantry
Infantrymen are soldiers who are specifically trained for the role of fighting on foot to engage the enemy face to face and have historically borne the brunt of the casualties of combat in wars. As the oldest branch of combat arms, they are the backbone of armies...
, 4 rifles
Rifles troops
The rifles troops often called rifle troops in English, is name for the Russian infantry combat Arm of Service that, since 1857, had been armed with rifles as their primary firearm...
and 14 cavalry
Cavalry
Cavalry or horsemen were soldiers or warriors who fought mounted on horseback. Cavalry were historically the third oldest and the most mobile of the combat arms...
regiment
Regiment
A regiment is a major tactical military unit, composed of variable numbers of batteries, squadrons or battalions, commanded by a colonel or lieutenant colonel...
s and some other units. They were abolished in 1918.

The Imperial Russian Guard units did not consist exclusively of troops recruited from Russian population, but also included Lithuanian, Finnish and Ukrainian personnel.

The Red Guards were armed groups of workers formed during the Russian Revolution of 1917
Russian Revolution of 1917
The Russian Revolution is the collective term for a series of revolutions in Russia in 1917, which destroyed the Tsarist autocracy and led to the creation of the Soviet Union. The Tsar was deposed and replaced by a provisional government in the first revolution of February 1917...
. They were the main strike force of the Bolsheviks, and were created in March 1917 at industrial enterprises by Factory and Plant Committees and by Bolshevik party cells. When the Soviet Red Army
Red Army
The Workers' and Peasants' Red Army started out as the Soviet Union's revolutionary communist combat groups during the Russian Civil War of 1918-1922. It grew into the national army of the Soviet Union. By the 1930s the Red Army was among the largest armies in history.The "Red Army" name refers to...
was formed in 1918, the Red Guards became the Army Reserve and the basis for the formation of regular military detachments.

The White Guard or White Army , comprised both the political and military forces of the Russian White Movement
White movement
The White movement and its military arm the White Army - known as the White Guard or the Whites - was a loose confederation of Anti-Communist forces.The movement comprised one of the politico-military Russian forces who fought...
, which opposed the Bolshevik
Bolshevik
The Bolsheviks, originally also Bolshevists , derived from bol'shinstvo, "majority") were a faction of the Marxist Russian Social Democratic Labour Party which split apart from the Menshevik faction at the Second Party Congress in 1903....
s after the October Revolution
October Revolution
The October Revolution , also known as the Great October Socialist Revolution , Red October, the October Uprising or the Bolshevik Revolution, was a political revolution and a part of the Russian Revolution of 1917...
and fought against the Red Army
Red Army
The Workers' and Peasants' Red Army started out as the Soviet Union's revolutionary communist combat groups during the Russian Civil War of 1918-1922. It grew into the national army of the Soviet Union. By the 1930s the Red Army was among the largest armies in history.The "Red Army" name refers to...
during the Russian Civil War
Russian Civil War
The Russian Civil War was a multi-party war that occurred within the former Russian Empire after the Russian provisional government collapsed to the Soviets, under the domination of the Bolshevik party. Soviet forces first assumed power in Petrograd The Russian Civil War (1917–1923) was a...
from 1918 to 1921.

The Guards units were again awarded to units and formations which distinguishing themselves in during the second world war
Eastern Front (World War II)
The Eastern Front of World War II was a theatre of World War II between the European Axis powers and co-belligerent Finland against the Soviet Union, Poland, and some other Allies which encompassed Northern, Southern and Eastern Europe from 22 June 1941 to 9 May 1945...
by the order of People's Commissar for Defence of USSR No.303 on the 18 September 1941, and were considered to have elite status. However, the Guards badge was not introduced until 21 May 1943.

There were total 11 Guard Armies and 6 Guard Tank Armies:

The Guards distinction was retained as designations of units and formations in the armed forces of the former Soviet Union: Russia
Armed Forces of the Russian Federation
The Armed Forces of the Russian Federation are the military services of Russia, established after the break-up of the Soviet Union. On 7 May 1992 Boris Yeltsin signed a decree establishing the Russian Ministry of Defence and placing all Soviet Armed Forces troops on the territory of the RSFSR...
, Belarus
Armed Forces of Belarus
The Armed Forces of Belarus consist of the Army and the Air and Air Defense Forces, all under the command of the Ministry of Defense of the Republic of Belarus...
, and Ukraine
Ukrainian Ground Forces
The Ukrainian Ground Forces are the land force component of the Military of Ukraine. They were formed from Soviet Army formations, units, and establishments, including three military districts , that were on Ukrainian soil when the Soviet Union collapsed in 1990-92.Between the fall of the USSR and...
.
The source of this article is wikipedia, the free encyclopedia.  The text of this article is licensed under the GFDL.