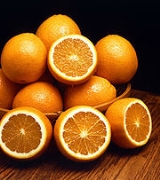 The colour orange occurs between red
Red
Red is any of a number of similar colors evoked by light consisting predominantly of the longest wavelengths of light discernible by the human eye, in the wavelength range of roughly 630–740 nm. Longer wavelengths than this are called infrared , and cannot be seen by the naked eye...
and yellow
Yellow
Yellow is the color evoked by light that stimulates both the L and M cone cells of the retina about equally, with no significant stimulation of the S cone cells. Light with a wavelength of 570–590 nm is yellow, as is light with a suitable mixture of red and green...
in the visible spectrum
Visible spectrum
The visible spectrum is the portion of the electromagnetic spectrum that is visible to the human eye. Electromagnetic radiation in this range of wavelengths is called visible light or simply light. A typical human eye will respond to wavelengths from about 390 to 750 nm. In terms of...
at a wavelength
Wavelength
In physics, the wavelength of a sinusoidal wave is the spatial period of the wave—the distance over which the wave's shape repeats.It is usually determined by considering the distance between consecutive corresponding points of the same phase, such as crests, troughs, or zero crossings, and is a...
of about 585–620 nm
Nanometre
A nanometre is a unit of length in the metric system, equal to one billionth of a metre. The name combines the SI prefix nano- with the parent unit name metre .The nanometre is often used to express dimensions on the atomic scale: the diameter...
, and has a hue
Hue
Hue is one of the main properties of a color, defined technically , as "the degree to which a stimulus can be describedas similar to or different from stimuli that are described as red, green, blue, and yellow,"...
of 30° in HSV colour space. It is numerically halfway between red and yellow in a gamma-compressed
Gamma correction
Gamma correction, gamma nonlinearity, gamma encoding, or often simply gamma, is the name of a nonlinear operation used to code and decode luminance or tristimulus values in video or still image systems...
RGB colour space
RGB color space
An RGB color space is any additive color space based on the RGB color model. A particular RGB color space is defined by the three chromaticities of the red, green, and blue additive primaries, and can produce any chromaticity that is the triangle defined by those primary colors...
, the expression of which is the RGB colour wheel. The complementary colour of orange is blue
Blue
Blue is a colour, the perception of which is evoked by light having a spectrum dominated by energy with a wavelength of roughly 440–490 nm. It is considered one of the additive primary colours. On the HSV Colour Wheel, the complement of blue is yellow; that is, a colour corresponding to an equal...
. Orange pigments are largely in the ochre
Ochre
Ochre is the term for both a golden-yellow or light yellow brown color and for a form of earth pigment which produces the color. The pigment can also be used to create a reddish tint known as "red ochre". The more rarely used terms "purple ochre" and "brown ochre" also exist for variant hues...
or cadmium
Cadmium pigments
Cadmium pigments are a class of pigments that have cadmium as one of the chemical components. They are highly toxic and can produce cadmium poisoning. Most of cadmium produced worldwide is used in the production of nickel-cadmium batteries, but about half the remaining consumption, which is about...
families, and absorb mostly blue light.

The colour orange is named after the orange fruit
Orange (fruit)
An orange—specifically, the sweet orange—is the citrus Citrus × sinensis and its fruit. It is the most commonly grown tree fruit in the world....
, after the appearance of the ripe fruit. Before this word was introduced to the English-speaking world, the colour was referred to as ġeolurēad (yellow-red).

The first recorded use of orange as a colour name in English was in 1512, in a will
Will (law)
A will or testament is a legal declaration by which a person, the testator, names one or more persons to manage his/her estate and provides for the transfer of his/her property at death...
now filed with the Public Records Office.

Web colour orange, defined as FFA500, is the only named colour defined in CSS
Cascading Style Sheets
Cascading Style Sheets is a style sheet language used to describe the presentation semantics of a document written in a markup language...
that is not also defined in HTML 4.01
HTML
HyperText Markup Language is the predominant markup language for web pages. HTML elements are the basic building-blocks of webpages....
.

Displayed to the left is the actual colour of the outer skin of a typical orange. This colour is called orange peel. It is the same colour as the fruit for which it was named.

A discussion of the difference between the colour orange (the colour halfway between red and yellow, i.e. colour wheel orange, RGB #FF7F00, shown at the top of this article) and the colour orange peel (the actual colour of the outer skin of an orange), may be found in Maerz and Paul.

The first recorded use of orange peel as a colour name in English was in 1839.

Burnt orange has been in use as a colour name for this deep shade of orange since 1915.

This variation of orange is one of the primary colours for the American Football
American football
American football is a sport played between two teams of eleven with the objective of scoring points by advancing the ball into the opposing team's end zone. Known in the United States simply as football, it may also be referred to informally as gridiron football. The ball can be advanced by...
team the Cleveland Browns
Cleveland Browns
The Cleveland Browns are a professional football team based in Cleveland, Ohio. They are currently members of the North Division of the American Football Conference in the National Football League...
. Burnt orange was popular in interior design
Interior design
Interior design describes a group of various yet related projects that involve turning an interior space into an effective setting for the range of human activities are to take place there. An interior designer is someone who conducts such projects...
during the 1970s, and is often associated with this period. Red headed people
Red hair
Red hair occurs on approximately 1–2% of the human population. It occurs more frequently in people of northern or western European ancestry, and less frequently in other populations...
s usually have hair that is more accurately a burnt orange colour.

Brown is actually derived from the orange part (orange + grey
Grey
Grey or gray is an achromatic or neutral color.Complementary colors are defined to mix to grey, either additively or subtractively, and many color models place complements opposite each other in a color wheel. To produce grey in RGB displays, the R, G, and B primary light sources are combined in...
) of the colour spectrum. It can be described as an especially dark orange.

The first recorded use of brown as a colour name in English was in about 1000 in the Metres of Boethius.

Orange can also be associated with colleges. Among notable colleges with orange as a colour include:


Orange is a team colour for a number of professional sports teams. 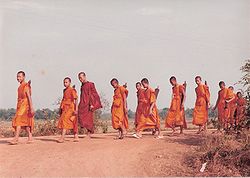