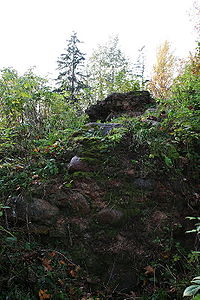 Olshanski was a Lithuanian
Lithuanians
Lithuanians are the Baltic ethnic group native to Lithuania, where they number around 2,765,600 people. Another million or more make up the Lithuanian diaspora, largely found in countries such as the United States, Brazil, Canada, Colombia, Russia, United Kingdom and Ireland. Their native language...
princely family from Galšia (Alšėnai, Halshany
Halshany
Halshany is a village and former town in Belarus, Hrodna Voblast. It is known as the former seat of the Holszanski princely family and the location of the ruined Halshany Castle.-History:...
, Гальшаны), Belarus
Belarus
Belarus , officially the Republic of Belarus, is a landlocked country in Eastern Europe, bordered clockwise by Russia to the northeast, Ukraine to the south, Poland to the west, and Lithuania and Latvia to the northwest. Its capital is Minsk; other major cities include Brest, Grodno , Gomel ,...
, which used to be a part of the Grand Duchy of Lithuania
Grand Duchy of Lithuania
The Grand Duchy of Lithuania was a European state from the 12th /13th century until 1569 and then as a constituent part of Polish-Lithuanian Commonwealth until 1791 when Constitution of May 3, 1791 abolished it in favor of unitary state. It was founded by the Lithuanians, one of the polytheistic...
. Their Coat of Arms was Hipocentaur
Coat of arms of Hipocentaur
Hipocentaur is a Polish coat of arms. It was used by a number of szlachta families under the Polish-Lithuanian Commonwealth.-See also:* Polish heraldry* Heraldry* Coat of arms...
. During the 14th, 15th and 16th centuries most of the family was Orthodox by faith and Ruthenian by language, although there were exceptions, in particular Pavel Olshanski was a Catholic Church official. The last wives of Jogaila
Jogaila
Jogaila, later 'He is known under a number of names: ; ; . See also: Jogaila : names and titles. was Grand Duke of Lithuania , king consort of Kingdom of Poland , and sole King of Poland . He ruled in Lithuania from 1377, at first with his uncle Kęstutis...
and Vytautas came from this family. The Olshanski family ended in 1556, following the death of Prince Semen (his uncle Pavel Olshanski, last-but-one male representative of the family, died just one year before). Princess Maria Olshanskaya, the wife of Andrey Kurbsky
Andrey Kurbsky
Knyaz Andrey Mikhailovich Kurbsky was an intimate friend and then a leading political opponent of the Russian tsar Ivan the Terrible. His correspondence with the tsar is a unique source for the history of 16th-century Russia...
, died in 1586. Their estates were inherited by the Sapieha
Sapieha
The Sapieha is a Polish-Lithuanian princely family descending from the medieval boyars of Smolensk. The family acquired great influence in the sixteenth century.-History:...
family, which hailed from Smolensk
Smolensk
Smolensk is a city and the administrative center of Smolensk Oblast, Russia, located on the Dnieper River. Situated west-southwest of Moscow, this walled city was destroyed several times throughout its long history since it was on the invasion routes of both Napoleon and Hitler. Today, Smolensk...
. The seats of the family included Halshany Castle
Halshany Castle
Halshany or Holszany Castle is the ruined residence of the Sapieha magnate family in Halshany, Hrodna Voblast, Belarus. It was erected in the early 17th century in place of an older seat of the Holszanski princely family....
and Rokantiškės Castle
Rokantiškes Castle
Rokantiškės Castle ruins are in Naujoji Vilnia elderate of Vilnius, Lithuania.The castle was located east of Vilnius on a high hill near the Vilnia River. First castle was built in 12th century. In 16th century, it was rebuilt in the Renaissance style and has been the seat of the Olshanski family...
.

For the first time Olshanski family is mentioned in written sources at the end of the 14th century when Ivan, son of Algimantas, assisted Vytautas the Great
Vytautas the Great
Vytautas ; styled "the Great" from the 15th century onwards; c. 1350 October 27, 1430) was one of the most famous rulers of medieval Lithuania. Vytautas was the ruler of the Grand Duchy of Lithuania which chiefly encompassed the Lithuanians and Ruthenians...
in his fight with Jogaila
Jogaila
Jogaila, later 'He is known under a number of names: ; ; . See also: Jogaila : names and titles. was Grand Duke of Lithuania , king consort of Kingdom of Poland , and sole King of Poland . He ruled in Lithuania from 1377, at first with his uncle Kęstutis...
. This is the only mention of Algimantas, the founder of the dynasty. Such a late mention of strong family is attributed to the geographic location of their domain: Halshany was not in the way of either the Livonian Order
Livonian Order
The Livonian Order was an autonomous Livonian branch of the Teutonic Order and a member of the Livonian Confederation from 1435–1561. After being defeated by Samogitians in the 1236 Battle of Schaulen , the remnants of the Livonian Brothers of the Sword were incorporated into the Teutonic Knights...
or the Teutonic Knights. It is unknown how the family managed to maintain their status during long and stable reigns of powerful Grand Dukes of Lithuania from the Gediminid dynasty.