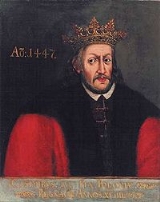 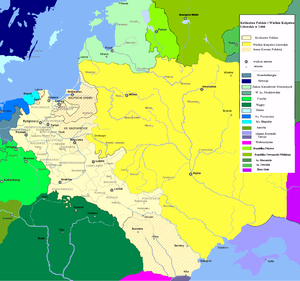 Casimir IV KG
Order of the Garter
The Most Noble Order of the Garter, founded in 1348, is the highest order of chivalry, or knighthood, existing in England. The order is dedicated to the image and arms of St...
( kaˈʑimi̯ɛʒ jaɡi̯ɛlˈlɔɲt͡ʃɨk; ; 30 November 1427 – 7 June 1492) of the House of Jagiellon
Jagiellon dynasty
The Jagiellonian dynasty was a royal dynasty originating from the Lithuanian House of Gediminas dynasty that reigned in Central European countries between the 14th and 16th century...
was Grand Duke of Lithuania from 1440, and King of Poland from 1447, until his death.

Casimir was the second son of King Władysław II Jagiełło (Jogaila)
Jogaila
Jogaila, later 'He is known under a number of names: ; ; . See also: Jogaila : names and titles. was Grand Duke of Lithuania , king consort of Kingdom of Poland , and sole King of Poland . He ruled in Lithuania from 1377, at first with his uncle Kęstutis...
, and the younger brother of Władysław III of Varna. 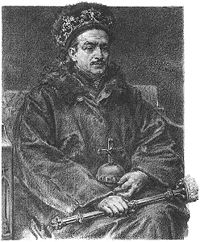 During Casimir's rule the rights of the Lithuanian nobility—dukes, magnates and boyar
Boyar
A boyar, or bolyar , was a member of the highest rank of the feudal Moscovian, Kievan Rus'ian, Bulgarian, Wallachian, and Moldavian aristocracies, second only to the ruling princes , from the 10th century through the 17th century....
s (lesser nobles), irrespective of their religion and ethnicity—were put on an equal footing to those of the Polish szlachta
Szlachta
The szlachta was a legally privileged noble class with origins in the Kingdom of Poland. It gained considerable institutional privileges during the 1333-1370 reign of Casimir the Great. In 1413, following a series of tentative personal unions between the Grand Duchy of Lithuania and the Kingdom of...
. Additionally, Casimir promised to protect the Grand Duchy's borders and not to appoint persons from the Polish Kingdom
Kingdom of Poland (1385–1569)
The Kingdom of Poland of the Jagiellons was the Polish state created by the accession of Jogaila , Grand Duke of Lithuania, to the Polish throne in 1386. The Union of Krewo or Krėva Act, united Poland and Lithuania under the rule of a single monarch...
to the offices of the Grand Duchy. He accepted that decisions on matters concerning the Grand Duchy would not be made without the Council of Lords' consent. He also granted the subject region of Samogitia
Eldership of Samogitia
The Duchy of Samogitia had been the administrative unit of the Grand Duchy of Lithuania from 1422 . Between 1422 to 1441 it was known as the Eldership of Samogitia...
the right to elect its own elder
Elder (administrative title)
The term Elder is used in several different countries and organizations to indicate a position of authority...
. Casimir was the first ruler of Lithuania baptised at birth, becoming the first natively Roman Catholic Grand Duke.