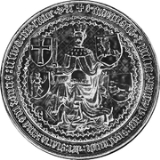 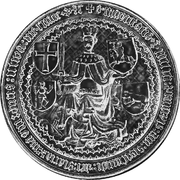 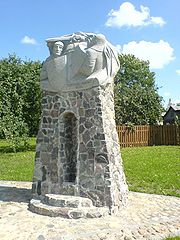 Sigismund Kęstutaitis was the Grand Duke of Lithuania from 1432 to 1440. Sigismund
Sigismund
Sigismund is a German proper name, meaning "protection through victory", from Old High German sigu "victory" + munt "hand, protection". Tacitus Latinises it Segimundus...
was his baptismal name; Sigismund's pagan Lithuanian birth name is unknown. He was son of the Grand Duke of Lithuania Kęstutis
Kestutis
Kęstutis was monarch of medieval Lithuania. He was the Duke of Trakai and governed the Grand Duchy of Lithuania, 1342–82, together with his brother Algirdas , and with his nephew Jogaila...
and his wife Birutė
Birute
Birutė was the second wife of Kęstutis, Grand Duke of Lithuania, and mother of Vytautas the Great. There is very little known about Birutė's life but after her death a strong cult developed among Lithuanians, especially in Samogitia.-Marriage:...
.

After the death of Kęstutis
Kestutis
Kęstutis was monarch of medieval Lithuania. He was the Duke of Trakai and governed the Grand Duchy of Lithuania, 1342–82, together with his brother Algirdas , and with his nephew Jogaila...
, he was a prisoner of Jogaila
Jogaila
Jogaila, later 'He is known under a number of names: ; ; . See also: Jogaila : names and titles. was Grand Duke of Lithuania , king consort of Kingdom of Poland , and sole King of Poland . He ruled in Lithuania from 1377, at first with his uncle Kęstutis...
from 1382–1384. Sigismund was baptized in Catholic rite in 1383. In 1384 he escaped captivity and joined his brother Vytautas the Great
Vytautas the Great
Vytautas ; styled "the Great" from the 15th century onwards; c. 1350 October 27, 1430) was one of the most famous rulers of medieval Lithuania. Vytautas was the ruler of the Grand Duchy of Lithuania which chiefly encompassed the Lithuanians and Ruthenians...
, who allied himself with the Teutonic Knights
Teutonic Knights
The Order of Brothers of the German House of Saint Mary in Jerusalem , commonly the Teutonic Order , is a German medieval military order, in modern times a purely religious Catholic order...
. When Vytautas allied with the Teutonic Knights for the second time to fight Skirgaila
Skirgaila
Skirgaila , also known as Ivan; ca. 1353 or 1354 – 11 January 1397 in Kiev; baptized 1383/1384 as Casimir) was a regent of the Grand Duchy of Lithuania for his brother Jogaila from 1386 to 1392. He was son of Algirdas, Grand Duke of Lithuania, and his second wife Uliana of Tver.-Biography:After...
, Sigismund was a hostage of the Teutonic Knights together with his family from 1389–1398. He became Duke of Navahradak
Navahradak
-Early history:First mentioned in the Sophian First Chronicle and Fourth Novgorod Chronicle in 1044 in relation to a war of Yaroslav I the Wise against Lithuanian tribes. It was also mentioned in the Hypatian Codex under 1252 as Novogorodok -Early history:First mentioned in the Sophian First...
, 1390–1440, and Starodub
Starodub
Starodub is a town and the administrative center of Starodubsky District of Bryansk Oblast, Russia. It is located on the Babinets River , southwest of Bryansk. Population: 16,000 .-History:...
since 1406. He participated in the Battle of Vorskla and the Battle of Grunwald
Battle of Grunwald
The Battle of Grunwald or 1st Battle of Tannenberg was fought on 15 July 1410, during the Polish–Lithuanian–Teutonic War. The alliance of the Kingdom of Poland and the Grand Duchy of Lithuania, led respectively by King Jogaila and Grand Duke Vytautas , decisively defeated the Teutonic Knights, led...
. After the death of Vytautas, he supported his cousin Švitrigaila
Švitrigaila
Švitrigaila Švitrigaila Švitrigaila (ca 1370 – 10 February 1452; was the Grand Duke of Lithuania from 1430 to 1432. He spent most of his life in largely unsuccessful dynastic struggles against his cousins Vytautas and Sigismund Kęstutaitis.-Struggle against Vytautas:...
in his fight against Poland
Poland
Poland , officially the Republic of Poland , is a country in Central Europe bordered by Germany to the west; the Czech Republic and Slovakia to the south; Ukraine, Belarus and Lithuania to the east; and the Baltic Sea and Kaliningrad Oblast, a Russian exclave, to the north...
, but later was convinced by nobles to participate in a conspiracy against him.

On September 1, 1432 Sigismund became the Grand Duke of Lithuania. He signed Union of Grodno with Jogaila and ceded some territories in Volhynia
Volhynia
Volhynia, Volynia, or Volyn is a historic region in western Ukraine located between the rivers Prypiat and Southern Bug River, to the north of Galicia and Podolia; the region is named for the former city of Volyn or Velyn, said to have been located on the Southern Bug River, whose name may come...
and Podolia
Podolia
The region of Podolia is an historical region in the west-central and south-west portions of present-day Ukraine, corresponding to Khmelnytskyi Oblast and Vinnytsia Oblast. Northern Transnistria, in Moldova, is also a part of Podolia...
to Poland. However, Švitrigaila was still active and had support from many Eastern Orthodox nobles. In 1434, in an attempt to attract support from these nobles, he issued a privilege to nobles of Eastern Orthodox faith, making their rights equal to the rights of noble Roman Catholics. He guaranteed that no noble, regardless of religion, of Grand Duchy of Lithuania can be imprisoned and punished without a court. The privilege was an important development and accelerated formation of a feudal system.

Sigismund's army defeated Švitrigaila in the Battle of Pabaiskas
Battle of Pabaiskas
The Battle of Pabaiskas took place on September 1, 1435 near Ukmergė , by the Šventoji River in the Grand Duchy of Lithuania...
on September 1, 1435. Livonian Order
Livonian Order
The Livonian Order was an autonomous Livonian branch of the Teutonic Order and a member of the Livonian Confederation from 1435–1561. After being defeated by Samogitians in the 1236 Battle of Schaulen , the remnants of the Livonian Brothers of the Sword were incorporated into the Teutonic Knights...
, an ally of Švitrigaila, suffered a major defeat. After strengthening his positions in Lithuania, he tried to loosen this ties with Poland and started negotiations 1438–1440 with Albert II, Holy Roman Emperor for an anti-Polish alliance but was killed by supporters of Švitrigaila (possibly led by Alexander Czartoryski
Czartoryski
Czartoryski is the surname of a Polish-Ukrainian-Lithuanian magnate family also known as the Familia. They used the Czartoryski Coat of arms and were the leading noble family of the Polish-Lithuanian Commonwealth in the 18th century.-History:The Czartoryski is a family of a Grand Ducal...
) on March 20, 1440. Sigismund had one son, Michael Boleslaw
Michael Boleslaw
Michael Žygimantaitis was the last male descendant of Kęstutis, Grand Duke of Lithuania. He supported his father Sigismund Kęstutaitis in power struggles with Švitrigaila. In 1435 he led his father's army to victory in the Battle of Pabaiskas. After his father's assassination in 1440, Michael...
, who died shortly before 10 February 1452.