Encyclopedia
Vitebsk, also known as Viciebsk or Vitsyebsk , is a city in Belarus
Belarus
Belarus , officially the Republic of Belarus, is a landlocked country in Eastern Europe, bordered clockwise by Russia to the northeast, Ukraine to the south, Poland to the west, and Lithuania and Latvia to the northwest. Its capital is Minsk; other major cities include Brest, Grodno , Gomel ,...
, near the border with Russia
Russia
Russia or , officially known as both Russia and the Russian Federation , is a country in northern Eurasia. It is a federal semi-presidential republic, comprising 83 federal subjects...
. The capital of the Vitebsk Oblast, in 2004 it had 342,381 inhabitants, making it the country's fourth largest city. It is served by Vitebsk Vostochny Airport
Vitebsk Vostochny Airport
Vitebsk Vostochny Airport is an airport in Belarus located 12 km southeast of Vitebsk. It accommodates small airliners up to the size of Tupolev Tu-154. Also can accommodate Il-76.-History:...
and Vitebsk air base
Vitebsk (air base)
Vitebsk is an air base in Belarus located 8 km northeast of Vitebsk. It is a small airfield complex with a single large tarmac. It was home to 339 VTAP flying 32 Ilyushin Il-76 cargo jets as well as Antonov An-22 planes....
.

In the 12th and 13th centuries Vitebsk was the seat of a minor principality which thrived at the crossroads of the river routes among the Baltic
Baltic Sea
The Baltic Sea is a brackish mediterranean sea located in Northern Europe, from 53°N to 66°N latitude and from 20°E to 26°E longitude. It is bounded by the Scandinavian Peninsula, the mainland of Europe, and the Danish islands. It drains into the Kattegat by way of the Øresund, the Great Belt and...
, Black
Black Sea
The Black Sea is bounded by Europe, Anatolia and the Caucasus and is ultimately connected to the Atlantic Ocean via the Mediterranean and the Aegean seas and various straits. The Bosphorus strait connects it to the Sea of Marmara, and the strait of the Dardanelles connects that sea to the Aegean...
, and Mediterranean
Mediterranean Sea
The Mediterranean Sea is a sea connected to the Atlantic Ocean surrounded by the Mediterranean region and almost completely enclosed by land: on the north by Anatolia and Europe, on the south by North Africa, and on the east by the Levant...
seas. In 1320 the city was incorporated into the Grand Duchy of Lithuania
Grand Duchy of Lithuania
The Grand Duchy of Lithuania was a European state from the 12th /13th century until 1569 and then as a constituent part of Polish-Lithuanian Commonwealth until 1791 when Constitution of May 3, 1791 abolished it in favor of unitary state. It was founded by the Lithuanians, one of the polytheistic...
; in 1569 it became a part of the Polish-Lithuanian Commonwealth
Polish-Lithuanian Commonwealth
The Polish–Lithuanian Commonwealth was a dualistic state of Poland and Lithuania ruled by a common monarch. It was the largest and one of the most populous countries of 16th- and 17th‑century Europe with some and a multi-ethnic population of 11 million at its peak in the early 17th century...
. In 1597 Vitebsk was granted the Magdeburg Rights
Magdeburg rights
Magdeburg Rights or Magdeburg Law were a set of German town laws regulating the degree of internal autonomy within cities and villages granted by a local ruler. Modelled and named after the laws of the German city of Magdeburg and developed during many centuries of the Holy Roman Empire, it was...
. In 1772 it was taken over by Russian Empire
Russian Empire
The Russian Empire was a state that existed from 1721 until the Russian Revolution of 1917. It was the successor to the Tsardom of Russia and the predecessor of the Soviet Union...
in the First Partition of Poland
First Partition of Poland
The First Partition of Poland or First Partition of the Polish-Lithuanian Commonwealth took place in 1772 as the first of three partitions that ended the existence of the Polish-Lithuanian Commonwealth by 1795. Growth in the Russian Empire's power, threatening the Kingdom of Prussia and the...
.

Under Imperial Russia the ancient center of Vitebsk was rebuilt in the Neoclassical style. The town was a significant shtot
Shtetl
A shtetl was typically a small town with a large Jewish population in Central and Eastern Europe until The Holocaust. Shtetls were mainly found in the areas which constituted the 19th century Pale of Settlement in the Russian Empire, the Congress Kingdom of Poland, Galicia and Romania...
in the Pale of Settlement
Pale of Settlement
The Pale of Settlement was the term given to a region of Imperial Russia, in which permanent residency by Jews was allowed, and beyond which Jewish permanent residency was generally prohibited...
, with around half its population Orthodox Jewish
Orthodox Judaism
Orthodox Judaism , is the approach to Judaism which adheres to the traditional interpretation and application of the laws and ethics of the Torah as legislated in the Talmudic texts by the Sanhedrin and subsequently developed and applied by the later authorities known as the Gaonim, Rishonim, and...
at the turn of the 20th century. The most famous of its Jewish natives was the painter Marc Chagall
Marc Chagall
Marc Chagall Art critic Robert Hughes referred to Chagall as "the quintessential Jewish artist of the twentieth century."According to art historian Michael J...
. Up to the Second World War, like many other cities in Europe, Vitebsk had a significant Jewish population: according to Russian census of 1897, out of the total population of 65,900, Jews constituted 34,400 (so around 52% percent).

In the years 1919–1991 Vitebsk was part of the Soviet Union
Soviet Union
The Soviet Union , officially the Union of Soviet Socialist Republics , was a constitutionally socialist state that existed in Eurasia between 1922 and 1991....
. During World War II
World War II
World War II, or the Second World War , was a global conflict lasting from 1939 to 1945, involving most of the world's nations—including all of the great powers—eventually forming two opposing military alliances: the Allies and the Axis...
, the city was under German occupation (10 July 1941 - 26 June 1944). Much of the old city was destroyed in the ensuing battles between the Nazis and the Red Army
Red Army
The Workers' and Peasants' Red Army started out as the Soviet Union's revolutionary communist combat groups during the Russian Civil War of 1918-1922. It grew into the national army of the Soviet Union. By the 1930s the Red Army was among the largest armies in history.The "Red Army" name refers to...
.

In January 1991, Vitebsk celebrated the first Marc Chagall Festival. In June 1992, a monument to Chagall was erected on his native Pokrovskaja street and a memorial inscription placed on the wall of his house. 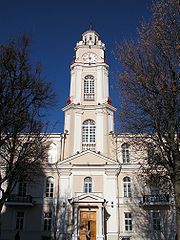 The city long preserved one of the oldest buildings in the country: the Annunciation Church. This magnificent six-pillared building dates back to the period of Kievan Rus. It was constructed in the 1140s, rebuilt in the 14th and 17th centuries, repaired in 1883 and destroyed by the Communist administration in 1961. Scarce remains of the church were conserved until 1992, when it was restored to its presumed original appearance, although it's a moot point how the church looked like when it was first built.

Churches from the Polish-Lithuanian period were likewise destroyed, although the Resurrection Church (1772–77) has been rebuilt. The Orthodox cathedral, dedicated to the Intercession of the Theotokos, was erected in 1760. There are also the town hall (1775); the Russian governor's palace, where Napoleon celebrated his 43rd birthday in 1812; the Neo-Romanesque Roman Catholic cathedral (1884–85); and an obelisk
Obelisk
An obelisk is a tall, four-sided, narrow tapering monument which ends in a pyramid-like shape at the top, and is said to resemble a petrified ray of the sun-disk. A pair of obelisks usually stood in front of a pylon...
commemorating the centenary of the Russian victory over Napoleon.

Vitebsk is also home to a lattice steel TV tower carrying a horizontal cross on which the antenna mast is guyed. This tower, which is nearly identical to that at Grodno
Grodno TV Tower
Grodno TV Tower is a 254 metre tall lattice tower at Grodno, Belarus. Grodno TV Tower, which was built in 1984, is from unique design. Its top is similar to the Wavre Transmitter guyed at four crossbars.Grodno TV Tower is used for FM- and TV-broadcasting....
, but a few metres shorter ( 245 metres in Vitebsk versus 254 metres at Grodno) was completed in 1983.