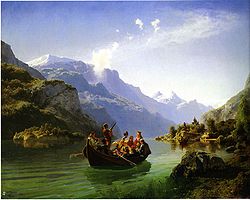 The context and impact of Norwegian romantic nationalism derived from recent history and the political situation. After more than 400 years as a Danish province treated as a cultural backwater by the absentee government in Copenhagen
Copenhagen
Copenhagen is the capital and largest city of Denmark, with an urban population of 1,199,224 and a metropolitan population of 1,930,260 . With the completion of the transnational Øresund Bridge in 2000, Copenhagen has become the centre of the increasingly integrating Øresund Region...
, the only uniquely Norwegian culture was found among the farmers and peasants in rural districts in Norway; Norway had in 1814 gained a partial independence
Norway in 1814
1814 was a pivotal year in the history of Norway. It started with Norway in a union with the Kingdom of Denmark subject to a naval blockade being ceded to the king of Sweden. In May a constitutional convention declared Norway an independent kingdom. By the end of the year the Norwegian parliament...
in a personal union with the dominant kingdom of Sweden
Sweden
Sweden , officially the Kingdom of Sweden , is a Nordic country on the Scandinavian Peninsula in Northern Europe. Sweden borders with Norway and Finland and is connected to Denmark by a bridge-tunnel across the Öresund....
.

Norwegians, having reasserted their political aspirations in 1814, the question of a distinct Norwegian identity became important. As urban culture gained prominence also in the rural districts, the rich cultural heritage of the Norwegian countryside came under threat.

As a result, a number of individuals set out to collect the artifacts of the distinctly Norwegian culture, hoping thereby to preserve and promote a sense of Norwegian identity.

The best-known such collectors in the 1840s and 50s were:

These achievements had an enduring impact on Norwegian culture and identity, an impact that can be witnessed in the influence on visual arts
Visual arts
The visual arts are art forms that create works which are primarily visual in nature, such as ceramics, drawing, painting, sculpture, printmaking, design, crafts, and often modern visual arts and architecture...
, classical music and literature
Literature
Literature is the art of written works, and is not bound to published sources...
, represented by e.g.:


In the waning days of the national romantic movement, efforts were renewed to collect rural buildings, handcrafts and arts. Arthur Hazelius, the founder of Nordiska Museet in Stockholm
Stockholm
Stockholm is the capital and the largest city of Sweden and constitutes the most populated urban area in Scandinavia. Stockholm is the most populous city in Sweden, with a population of 851,155 in the municipality , 1.37 million in the urban area , and around 2.1 million in the metropolitan area...
gathered (and arguably rescued) large collections and sent to Sweden.

The last king of union between Sweden and Norway, Oscar II
Oscar II of Sweden
Oscar II , baptised Oscar Fredrik was King of Sweden from 1872 until his death and King of Norway from 1872 until 1905. The third son of King Oscar I of Sweden and Josephine of Leuchtenberg, he was a descendant of Gustav I of Sweden through his mother.-Early life:At his birth in Stockholm, Oscar...
, was a supporter of this new wave of collecting, starting what must be the oldest outdoor museum, the origins of Norsk Folkemuseum
Norsk Folkemuseum
Norsk Folkemuseum, the Norwegian Museum of Cultural History at Bygdøy in Oslo, is a large open air museum. Norsk Folkemuseum is one of Norway’s largest museum of cultural history....
. He supported the manager of the Royal domains at Bygdøy
Bygdøy
Bygdøy or Bygdø is a peninsula on the western side of Oslo, Norway. Administratively, Bygdøy belongs to the borough of Frogner.Bygdøy has several museums, like the Kon-Tiki Museum, which shows all year long the legendary expeditions of Thor Heyerdahl; the Norwegian Museum of Cultural History ; the...
, Christian Holst
Christian Holst
Christian Lamhauge Holst is a Danish/Faroese football player, currently playing for Silkeborg IF.- Club career :A striker, Holst started his career at Danish lower division teams Thurø and Svendborg before moving to Lyngby Boldklub in 2003...
in his efforts to gather old buildings from the rural districts. Among the buildings that are still at the museum, the Gol stave church
Gol stave church
Gol Stave Church is a stave church originally from Gol, Hallingdal, Norway. It is now located in the Norwegian Museum of Cultural History at Bygdøy in Oslo, Norway. -Description:...
, moved here in the beginning of the 1880s, is the most prominent. Soon after other pioneers started equal efforts to rescue important pieces of traditional Norwegian architecture and handicraft. Anders Sandvig
Anders Sandvig
Anders Sandvig was a Norwegian dentist most noted for having founded Maihaugen, an innovative regional ethnological and architectural museum in Lillehammer, documenting the vernacular architecture of Gudbrandsdalen.-Biography:...
started the museum Maihaugen
Maihaugen
Maihaugen is one of the most visited tourist attractions in Lillehammer, Norway. Maihaugen, with close to 200 buildings, is one of Northern Europe's largest open air museums and is one of the largest cultural facilities in Norway.-History:The founder, Anders Sandvig, collected from old houses and...
at Lillehammer
Lillehammer
is a town and municipality in Oppland county, Norway, globally known for hosting the 1994 Winter Olympics. It is part of the traditional region of Gudbrandsdal. The administrative centre of the municipality is the town of Lillehammer. As of May 2011, the population of the town of Lillehammer was...
. Hulda Garborg
Hulda Garborg
Hulda Garborg was a Norwegian writer, novelist, playwright, poet, folk dancer, and theatre instructor...
started the collecting of traditional folk costume
Bunad
Bunad is an umbrella term encompassing, in its broadest sense, a range of both traditional rural garments as well modern 20th century folk costumes. In its narrow sense the word Bunad does only refer to garments constructed in the early 20th century very loosely based on tradition...
s (bunad) and dances
Folk dance
The term folk dance describes dances that share some or all of the following attributes:*They are dances performed at social functions by people with little or no professional training, often to traditional music or music based on traditional music....
.

This effort is still underway, but became more systematic as other cultural movements took the center stage in Norway in the late 19th and early 20th century.

Romantic nationalism has had an enormous impact on the Norwegian national identity. The Askeladden
Askeladden
Askeladden is the main character in many Norwegian folktales. In some ways, he represents the small man who succeeds where all others fail. He always wins in the end, often winning the princess and half the kingdom.-Folk tales:...
character from the fairy tales is considered being an integral part of the Norwegian way. On the Norwegian Constitution Day
Norwegian Constitution Day
Norwegian Constitution Day is the National Day of Norway and is an official national holiday observed on May 17 each year. Among Norwegians, the day is referred to simply as syttende mai or syttande mai , Nasjonaldagen or Grunnlovsdagen , although the latter is less frequent.- Historical...
even in cities like Oslo
Oslo
Oslo is a municipality, as well as the capital and most populous city in Norway. As a municipality , it was established on 1 January 1838. Founded around 1048 by King Harald III of Norway, the city was largely destroyed by fire in 1624. The city was moved under the reign of Denmark–Norway's King...
and Bergen, a great proportion of people dress up in bunad
Bunad
Bunad is an umbrella term encompassing, in its broadest sense, a range of both traditional rural garments as well modern 20th century folk costumes. In its narrow sense the word Bunad does only refer to garments constructed in the early 20th century very loosely based on tradition...
for the parade, unthinkable 100 years ago.