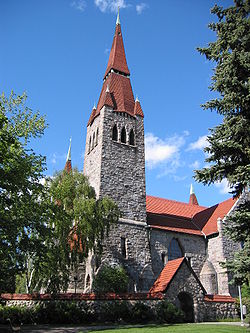 The National Romantic style was a Nordic
Nordic countries
The Nordic countries make up a region in Northern Europe and the North Atlantic which consists of Denmark, Finland, Iceland, Norway and Sweden and their associated territories, the Faroe Islands, Greenland and Åland...
architectural style that was part of the national romantic movement
Romantic nationalism
Romantic nationalism is the form of nationalism in which the state derives its political legitimacy as an organic consequence of the unity of those it governs...
during the late 19th and early 20th century. Designers turned to early Medieval and even prehistoric precedents to construct a style appropriate to the perceived character of a people. The style can be seen as a reaction to industrialism and an expression of the same "dream of the North" nationalism that gave impetus to renewed interest in the edda
Edda
The term Edda applies to the Old Norse Poetic Edda and Prose Edda, both of which were written down in Iceland during the 13th century in Icelandic, although they contain material from earlier traditional sources, reaching into the Viking Age...
s and saga
Saga
Sagas, are stories in Old Norse about ancient Scandinavian and Germanic history, etc.Saga may also refer to:Business*Saga DAB radio, a British radio station*Saga Airlines, a Turkish airline*Saga Falabella, a department store chain in Peru...
s. Unlike much nostalgic Gothic Revival elsewhere, National Romantic architecture expressed progressive social and political ideals, through reformed domestic architecture.