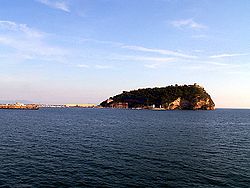 Nisida is a volcanic
Volcano
2. Bedrock3. Conduit 4. Base5. Sill6. Dike7. Layers of ash emitted by the volcano8. Flank| 9. Layers of lava emitted by the volcano10. Throat11. Parasitic cone12. Lava flow13. Vent14. Crater15...
islet of the Flegrean Islands
Flegrean Islands
thumb|250px|Procida and, in the background, Ischia, seen from [[Cape Miseno]].The Flegrean Islands are an archipelago in southern Italy, comprising the islands of Ischia, Procida, Vivara, Capri and Nisida....
archipelago, in southern Italy
Italy
Italy , officially the Italian Republic languages]] under the European Charter for Regional or Minority Languages. In each of these, Italy's official name is as follows:;;;;;;;;), is a unitary parliamentary republic in South-Central Europe. To the north it borders France, Switzerland, Austria and...
. It lies at a very short distance from Cape Posillipo, just north of Naples
Naples
Naples is a city in Southern Italy, situated on the country's west coast by the Gulf of Naples. Lying between two notable volcanic regions, Mount Vesuvius and the Phlegraean Fields, it is the capital of the region of Campania and of the province of Naples...
; it is now connected to the mainland by a stone bridge. The islet is almost circular, with a flooded crater forming the bay of Porto Paone on the southwest coast. It has a diameter of c. 0.5 km and a highest altitude of 105 m.

The name of the island comes from the Greek for "islet" (small island), νησίς, for which the Latinized accusative was nesida.

In ancient times Lucius Licinius Lucullus
Lucius Licinius Lucullus
This article is on the Consul of 151 BC. For the descendent see Lucullus, and for others of this name see Licinia .Lucius Licinius Lucullus was a novus homo who became Consul in 151 BC. He was imprisoned by the Tribunes for attempting to enforce a troop levy too harshly...
built a villa on Nisida, and also Marcus Iunius Brutus had a holiday villa there. Cicero
Cicero
Marcus Tullius Cicero , was a Roman philosopher, statesman, lawyer, political theorist, and Roman constitutionalist. He came from a wealthy municipal family of the equestrian order, and is widely considered one of Rome's greatest orators and prose stylists.He introduced the Romans to the chief...
's letters record him visiting Brutus there, and it was there that Brutus's wife Porcia
Porcia Catonis
Porcia Catonis, also known simply as Porcia was a Roman woman who lived in the 1st century BC. She was the daughter of Marcus Porcius Cato Uticencis and his first wife Atilia...
, the daughter of Cato Uticensis, committed suicide. He also may have agreed with Cassius
Gaius Cassius Longinus
Gaius Cassius Longinus was a Roman senator, a leading instigator of the plot to kill Julius Caesar, and the brother in-law of Marcus Junius Brutus.-Early life:...
on the assassination of Julius Caesar
Assassination of Julius Caesar
The assassination of Julius Caesar was the result of a conspiracy by approximately forty Roman senators who called themselves Liberators. Led by Gaius Cassius Longinus and Marcus Junius Brutus, they stabbed Julius Caesar to death in the Theatre of Pompey on the Ides of March 44 BC...
there. The claim is made that some of archaeological remains on Nisida are, indeed, those of the villa of Brutus. There may have been a monastery there in the 7th century (see below). In the 16th century a castle was built, which was subsequently a fief of the Macedonio family.

In the 19th century, Nisida was the site of an infamous Bourbon
House of Bourbon
The House of Bourbon is a European royal house, a branch of the Capetian dynasty . Bourbon kings first ruled Navarre and France in the 16th century. By the 18th century, members of the Bourbon dynasty also held thrones in Spain, Naples, Sicily, and Parma...
prison that gained notoriety when - after a visit to the prison in 1851 - William Ewart Gladstone
William Ewart Gladstone
William Ewart Gladstone FRS FSS was a British Liberal statesman. In a career lasting over sixty years, he served as Prime Minister four separate times , more than any other person. Gladstone was also Britain's oldest Prime Minister, 84 years old when he resigned for the last time...
wrote his Two Letters to the Earl of Aberdeen on the State Prosecutions of the Neapolitan Government, exposing the harsh conditions. In these letters, Gladstone coined the now famous description of the Kingdom of Two Sicilies as "the negation of God erected into a system of Government." Indignation throughout Europe was partially responsible for the at least partial bettering of such conditions in the prison.

During the Second World War, the island was occupied by British Army
British Army
The British Army is the land warfare branch of Her Majesty's Armed Forces in the United Kingdom. It came into being with the unification of the Kingdom of England and Scotland into the Kingdom of Great Britain in 1707. The new British Army incorporated Regiments that had already existed in England...
and used by them as a prison facility. At least one execution of a war criminal (by firing squad) took place there during this time.

Nisida is divided now between a naval headquarters belonging to NATO and a juvenile detention facility.


A monastery at Nisida?

The surprisingly extensive connections between the island and Britain may begin in the 7th century with Hadrian or Adrian of Canterbury
Adrian of Canterbury
Saint Adrian of Canterbury was a famous scholar and the Abbot of St Augustine's Abbey in Canterbury in the English county of Kent.-Life:...
, abbot of Christchurch, Canterbury. Bede
Bede
Bede , also referred to as Saint Bede or the Venerable Bede , was a monk at the Northumbrian monastery of Saint Peter at Monkwearmouth, today part of Sunderland, England, and of its companion monastery, Saint Paul's, in modern Jarrow , both in the Kingdom of Northumbria...
records that he was a Greek-speaking Berber
Berber people
Berbers are the indigenous peoples of North Africa west of the Nile Valley. They are continuously distributed from the Atlantic to the Siwa oasis, in Egypt, and from the Mediterranean to the Niger River. Historically they spoke the Berber language or varieties of it, which together form a branch...
from North Africa
North Africa
North Africa or Northern Africa is the northernmost region of the African continent, linked by the Sahara to Sub-Saharan Africa. Geopolitically, the United Nations definition of Northern Africa includes eight countries or territories; Algeria, Egypt, Libya, Morocco, South Sudan, Sudan, Tunisia, and...
, who was abbot
Abbot
The word abbot, meaning father, is a title given to the head of a monastery in various traditions, including Christianity. The office may also be given as an honorary title to a clergyman who is not actually the head of a monastery...
of a monastery near Naples (non longe a Neapoli). The name of the monastery varies with different textual traditions between monasterium Niridanum and Hiridanum. Neither is identifiable as a place near Naples, which has lead many scholars to think that "Nisidanum", or "of Nisida" was meant. There are no other records of a monastery there, although there were many around the Bay of Naples. Hadrian was twice offered the position of Archbishop of Canterbury
Archbishop of Canterbury
The Archbishop of Canterbury is the senior bishop and principal leader of the Church of England, the symbolic head of the worldwide Anglican Communion, and the diocesan bishop of the Diocese of Canterbury. In his role as head of the Anglican Communion, the archbishop leads the third largest group...
by Pope Vitalian
Pope Vitalian
Pope Saint Vitalianus was Pope of the Catholic Church from July 30, 657, until January 27, 672.He was born in Segni, Lazio, the son of Anastasius.-Reign:...
, but instead suggested Theodore of Tarsus
Theodore of Tarsus
Theodore was the eighth Archbishop of Canterbury, best known for his reform of the English Church and establishment of a school in Canterbury....
, who then insisted that Hadrian accompany him. It is thought that a hypothetical "Neapolitan Gospelbook" which then ended up at Wearmouth-Jarrow is the source of some Neapolitan elements found in Northumbria
Northumbria
Northumbria was a medieval kingdom of the Angles, in what is now Northern England and South-East Scotland, becoming subsequently an earldom in a united Anglo-Saxon kingdom of England. The name reflects the approximate southern limit to the kingdom's territory, the Humber Estuary.Northumbria was...
n gospel manuscripts including the Lindisfarne Gospels
Lindisfarne Gospels
The Lindisfarne Gospels is an illuminated Latin manuscript of the gospels of Matthew, Mark, Luke and John in the British Library...
, which records feasts which were celebrated only in Naples: the birth of Saint Januarius and the Dedication of the Basilica of Stephen.