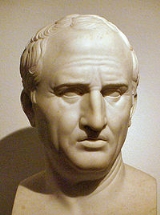 Overview
Marcus Tullius Cicero (icon; ˈkɪkɛroː; January 3, 106 BC – December 7, 43 BC; sometimes anglicized as Tully), was a Roman
Ancient Rome
Ancient Rome was a thriving civilization that grew on the Italian Peninsula as early as the 8th century BC. Located along the Mediterranean Sea and centered on the city of Rome, it expanded to one of the largest empires in the ancient world....
philosopher, statesman
Statesman
A statesman is usually a politician or other notable public figure who has had a long and respected career in politics or government at the national and international level. As a term of respect, it is usually left to supporters or commentators to use the term...
, lawyer
Lawyer
A lawyer, according to Black's Law Dictionary, is "a person learned in the law; as an attorney, counsel or solicitor; a person who is practicing law." Law is the system of rules of conduct established by the sovereign government of a society to correct wrongs, maintain the stability of political...
, political theorist, and Roman constitutionalist
Constitution of the Roman Republic
The Constitution of the Roman Republic was a set of guidelines and principles passed down mainly through precedent. The constitution was largely unwritten, uncodified, and constantly evolving...
. He came from a wealthy municipal
Municipium
Municipium , the prototype of English municipality, was the Latin term for a town or city. Etymologically the municipium was a social contract between municipes, the "duty holders," or citizens of the town. The duties, or munera, were a communal obligation assumed by the municipes in exchange for...
family of the equestrian order, and is widely considered one of Rome's greatest orators
Rhetoric
Rhetoric is the art of discourse, an art that aims to improve the facility of speakers or writers who attempt to inform, persuade, or motivate particular audiences in specific situations. As a subject of formal study and a productive civic practice, rhetoric has played a central role in the Western...
and prose stylists.

He introduced the Romans to the chief schools of Greek philosophy
Greek philosophy
Ancient Greek philosophy arose in the 6th century BCE and continued through the Hellenistic period, at which point Ancient Greece was incorporated in the Roman Empire...
and created a Latin philosophical vocabulary (with neologisms such as humanitas
Humanitas
The word humanitas was used by Cicero to describe the formation of an ideal speaker who he believed should be educated to possess a collection of virtues of character suitable for an active life of public service; these would include a fund of learning acquired from the study of bonae litterae ,...
, qualitas, quantitas, and essentia) distinguishing himself as a linguist, translator, and philosopher.

We are not born for ourselves alone

In anger nothing right nor judicious can be done.

We may, indeed, indulge in sport and jest, but in the same way as we enjoy sleep or other relaxations, and only when we have satisfied the claims of our earnest, serious task.

He is never less at leisure than when at leisure.

A friend is, as it were, a second self.

The shifts of Fortune test the reliability of friends.