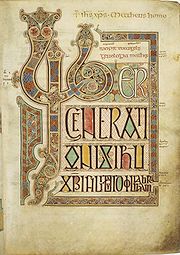 The Lindisfarne Gospels is an illuminated
Illuminated manuscript
An illuminated manuscript is a manuscript in which the text is supplemented by the addition of decoration, such as decorated initials, borders and miniature illustrations...
Latin
Latin
Latin is an Italic language originally spoken in Latium and Ancient Rome. It, along with most European languages, is a descendant of the ancient Proto-Indo-European language. Although it is considered a dead language, a number of scholars and members of the Christian clergy speak it fluently, and...
manuscript of the gospels of Matthew
Gospel of Matthew
The Gospel According to Matthew is one of the four canonical gospels, one of the three synoptic gospels, and the first book of the New Testament. It tells of the life, ministry, death, and resurrection of Jesus of Nazareth...
, Mark
Gospel of Mark
The Gospel According to Mark , commonly shortened to the Gospel of Mark or simply Mark, is the second book of the New Testament. This canonical account of the life of Jesus of Nazareth is one of the three synoptic gospels. It was thought to be an epitome, which accounts for its place as the second...
, Luke
Gospel of Luke
The Gospel According to Luke , commonly shortened to the Gospel of Luke or simply Luke, is the third and longest of the four canonical Gospels. This synoptic gospel is an account of the life and ministry of Jesus of Nazareth. It details his story from the events of his birth to his Ascension.The...
and John
Gospel of John
The Gospel According to John , commonly referred to as the Gospel of John or simply John, and often referred to in New Testament scholarship as the Fourth Gospel, is an account of the public ministry of Jesus...
in the British Library
British Library
The British Library is the national library of the United Kingdom, and is the world's largest library in terms of total number of items. The library is a major research library, holding over 150 million items from every country in the world, in virtually all known languages and in many formats,...
. The manuscript was produced on Lindisfarne
Lindisfarne
Lindisfarne is a tidal island off the north-east coast of England. It is also known as Holy Island and constitutes a civil parish in Northumberland...
in Northumbria
Northumbria
Northumbria was a medieval kingdom of the Angles, in what is now Northern England and South-East Scotland, becoming subsequently an earldom in a united Anglo-Saxon kingdom of England. The name reflects the approximate southern limit to the kingdom's territory, the Humber Estuary.Northumbria was...
in the late 7th century or early 8th century, and is generally regarded as the finest example of the kingdom's unique style of religious art, a style that combined Anglo-Saxon
Anglo-Saxon
Anglo-Saxon may refer to:* Anglo-Saxons, a group that invaded Britain** Old English, their language** Anglo-Saxon England, their history, one of various ships* White Anglo-Saxon Protestant, an ethnicity* Anglo-Saxon economy, modern macroeconomic term...
and Celtic themes, what is now called Hiberno-Saxon art, or Insular art
Insular art
Insular art, also known as Hiberno-Saxon art, is the style of art produced in the post-Roman history of Ireland and Great Britain. The term derives from insula, the Latin term for "island"; in this period Britain and Ireland shared a largely common style different from that of the rest of Europe...
. The manuscript is complete (though lacking its original cover), and is astonishingly well-preserved considering its great age.

The Lindisfarne Gospels are presumed to be the work of a monk named Eadfrith
Eadfrith of Lindisfarne
Eadfrith of Lindisfarne , also known as Saint Eadfrith, was Bishop of Lindisfarne, probably from 698 onwards. By the twelfth century it was believed that Eadfrith succeeded Eadberht and nothing in the surviving records contradicts this belief...
, who became Bishop of Lindisfarne in 698 and died in 721. Current scholarship indicates a date around 715, and it is believed they were produced in honour of St. Cuthbert
Cuthbert of Lindisfarne
Saint Cuthbert was an Anglo-Saxon monk, bishop and hermit associated with the monasteries of Melrose and Lindisfarne in the Kingdom of Northumbria, at that time including, in modern terms, northern England as well as south-eastern Scotland as far as the Firth of Forth...
. However, it is also possible that Eadfrith produced them prior to 698, in order to commemorate the elevation of Cuthbert's relics in that year. The Gospels are richly illustrated in the insular style, and were originally encased in a fine leather binding covered with jewels and metals made by Billfrith
Billfrith
Billfrith is an obscure Northumbrian saint credited with providing the jewel and metalwork encrusting the former binding of the Lindisfarne Gospels...
the Anchorite
Anchorite
Anchorite denotes someone who, for religious reasons, withdraws from secular society so as to be able to lead an intensely prayer-oriented, ascetic, and—circumstances permitting—Eucharist-focused life...
in the 8th century. During the Viking
Viking
The term Viking is customarily used to refer to the Norse explorers, warriors, merchants, and pirates who raided, traded, explored and settled in wide areas of Europe, Asia and the North Atlantic islands from the late 8th to the mid-11th century.These Norsemen used their famed longships to...
raids on Lindisfarne, however, this cover was lost, and a replacement made in 1852. The text is written in insular script
Insular script
Insular script was a medieval script system originally used in Ireland, then Great Britain, that spread to continental Europe under the influence of Celtic Christianity. Irish missionaries also took the script to continental Europe, where they founded monasteries such as Bobbio. The scripts were...
.

In the 10th century an Old English
Old English language
Old English or Anglo-Saxon is an early form of the English language that was spoken and written by the Anglo-Saxons and their descendants in parts of what are now England and southeastern Scotland between at least the mid-5th century and the mid-12th century...
translation of the Gospels was made: a word-for-word gloss
Gloss
A gloss is a brief notation of the meaning of a word or wording in a text. It may be in the language of the text, or in the reader's language if that is different....
inserted between the lines of the Latin text by Aldred
Aldred the Scribe
Aldred the Scribe is the name by which scholars identify a tenth-century priest, otherwise known only as Aldred, who was a provost of the monastic community of St. Cuthbert at Chester-le-Street in 970....
, Provost of Chester-le-Street
Chester-le-Street
Chester-le-Street is a town in County Durham, England. It has a history going back to Roman times when it was called Concangis. The town is located south of Newcastle upon Tyne and west of Sunderland on the River Wear...
.