Encyclopedia
The Nef reaction is an organic reaction
Organic reaction
Organic reactions are chemical reactions involving organic compounds. The basic organic chemistry reaction types are addition reactions, elimination reactions, substitution reactions, pericyclic reactions, rearrangement reactions, photochemical reactions and redox reactions. In organic synthesis,...
describing the acid
Acid catalysis
In acid catalysis and base catalysis a chemical reaction is catalyzed by an acid or a base. The acid is often the proton and the base is often a hydroxyl ion. Typical reactions catalyzed by proton transfer are esterfications and aldol reactions. In these reactions the conjugate acid of the carbonyl...
hydrolysis
Hydrolysis
Hydrolysis is a chemical reaction during which molecules of water are split into hydrogen cations and hydroxide anions in the process of a chemical mechanism. It is the type of reaction that is used to break down certain polymers, especially those made by condensation polymerization...
of a salt of a primary or secondary nitroalkane (1) to an aldehyde
Aldehyde
An aldehyde is an organic compound containing a formyl group. This functional group, with the structure R-CHO, consists of a carbonyl center bonded to hydrogen and an R group....
or a ketone
Ketone
In organic chemistry, a ketone is an organic compound with the structure RCR', where R and R' can be a variety of atoms and groups of atoms. It features a carbonyl group bonded to two other carbon atoms. Many ketones are known and many are of great importance in industry and in biology...
(3) and nitrous oxide
Nitrous oxide
Nitrous oxide, commonly known as laughing gas or sweet air, is a chemical compound with the formula . It is an oxide of nitrogen. At room temperature, it is a colorless non-flammable gas, with a slightly sweet odor and taste. It is used in surgery and dentistry for its anesthetic and analgesic...
(4).

The reaction was reported in 1894 by the chemist John Ulric Nef
John Ulric Nef
John Ulric Nef was a Swiss-born American chemist and the discoverer of the Nef reaction.-Life:...
, who treated the sodium salt of nitroethane
Nitroethane
Nitroethane is an organic compound having the chemical formula C2H5NO2. Similar in many regards to nitromethane, nitroethane is an oily liquid at standard temperature and pressure. Pure nitroethane is colourless and has a fruity odor.- Preparation :...
with sulfuric acid
Sulfuric acid
Sulfuric acid is a strong mineral acid with the molecular formula . Its historical name is oil of vitriol. Pure sulfuric acid is a highly corrosive, colorless, viscous liquid. The salts of sulfuric acid are called sulfates...
resulting in a 85-89% yield of nitrous oxide and at least 70% yield of acetaldehyde
Acetaldehyde
Acetaldehyde is an organic chemical compound with the formula CH3CHO or MeCHO. It is one of the most important aldehydes, occurring widely in nature and being produced on a large scale industrially. Acetaldehyde occurs naturally in coffee, bread, and ripe fruit, and is produced by plants as part...
. However, the reaction was pioneered a year earlier in 1893 by Konovalov, who converted the potassium salt of 1-phenylnitroethane with sulfuric acid to acetophenone
Acetophenone
Acetophenone is the organic compound with the formula C6H5CCH3. It is the simplest aromatic ketone. This colourless, viscous liquid is a precursor to useful resins and fragrances.-Production:Acetophenone can be obtained by a variety of methods...
.

The Nef reaction should not be confused with the Nef synthesis. 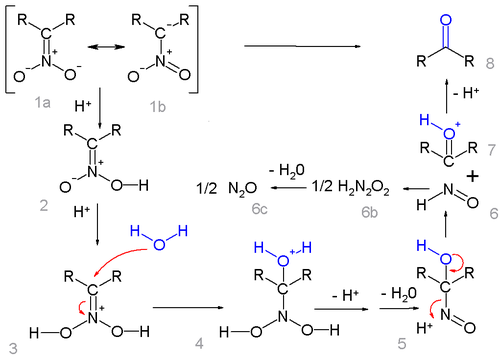 The salt is protonated forming the nitronate
Nitronate
A nitronate in organic chemistry is a functional group with the general structure R1R2C=N+2-).It is the anion of a nitronic acid, a tautomeric form of a nitro compound. A nitronic acid is also called a aci form...
2 (in some cases these nitronates have been isolated) and once more to the iminium
Iminium
An iminium salt or cation in organic chemistry has the general structure [R1R2C=NR3R4]+ and is as such a protonated or substituted imine. It is an intermediate in many organic reactions such as the Beckmann rearrangement, Vilsmeier-Haack reaction, Stephen reaction or the Duff reaction...
ion 3. This intermediate is attacked by water in a nucleophilic addition
Nucleophilic addition
In organic chemistry, a nucleophilic addition reaction is an addition reaction where in a chemical compound a π bond is removed by the creation of two new covalent bonds by the addition of a nucleophile....
forming 4 which loses a proton and then water to the 1-nitroso
Nitroso
Nitroso refers to a functional group in organic chemistry which has the general formula RNO. Nitroso compounds are a class of organic compounds containing the nitroso functional group, R−N=O....
-alkanol 5 which is believed to be responsible for the deep-blue color of the reaction mixture in many Nef reactions. This intermediate rearranges to hyponitrous acid
Hyponitrous acid
Hyponitrous acid is the chemical compound H2N2O2. This can be formulated as HON=NOH and is an isomer of nitramide, . It forms white crystals that are explosive when dry...
6 (forming nitrous oxide
Nitrous oxide
Nitrous oxide, commonly known as laughing gas or sweet air, is a chemical compound with the formula . It is an oxide of nitrogen. At room temperature, it is a colorless non-flammable gas, with a slightly sweet odor and taste. It is used in surgery and dentistry for its anesthetic and analgesic...
6c through 6b) and the oxonium ion
Oxonium ion
The oxonium ion in chemistry is any oxygen cation with three bonds. The simplest oxonium ion is the hydronium ion H3O+. Another oxonium ion frequently encountered in organic chemistry is obtained by protonation or alkylation of a carbonyl group e.g...
7 which loses a proton to form the carbonyl
Carbonyl
In organic chemistry, a carbonyl group is a functional group composed of a carbon atom double-bonded to an oxygen atom: C=O. It is common to several classes of organic compounds, as part of many larger functional groups....
compound.

Note that the reaction requires an alpha hydrogen atom and therefore the reaction fails with tertiary nitro compounds.

The Nef reaction is frequently encountered in organic synthesis
Organic synthesis
Organic synthesis is a special branch of chemical synthesis and is concerned with the construction of organic compounds via organic reactions. Organic molecules can often contain a higher level of complexity compared to purely inorganic compounds, so the synthesis of organic compounds has...
. It has been applied in carbohydrate chemistry
Carbohydrate chemistry
Carbohydrate chemistry is a subdiscipline of chemistry primarily concerned with the synthesis, structure, and function of carbohydrate structures. Due to the general structure of carbohydrates, their synthesis is often preoccupied with the selective formation of glycosidic linkages and the...
as a chain-extension method for aldose
Aldose
An aldose is a monosaccharide that contains only one aldehyde group per molecule. The chemical formula takes the form Cnn. The simplest possible aldose is the diose glycolaldehyde, which only contains two carbon atoms....
s for example in the isotope labeling of C14-D-mannose
Mannose
Mannose is a sugar monomer of the aldohexose series of carbohydrates. Mannose is a C-2 epimer of glucose. It is not part of human metabolism, but is a component of microbial cell walls, and is therefore a target of the immune system and also of antibiotics....
and C14-D-glucose
Glucose
Glucose is a simple sugar and an important carbohydrate in biology. Cells use it as the primary source of energy and a metabolic intermediate...
from D-arabinose
Arabinose
Arabinose is an aldopentose – a monosaccharide containing five carbon atoms, and including an aldehyde functional group.For biosynthetic reasons, most saccharides are almost always more abundant in nature as the "D"-form, or structurally analogous to D-glyceraldehyde.For sugars, the D/L...
and C14-nitromethane
Nitromethane
Nitromethane is an organic compound with the chemical formula . It is the simplest organic nitro compound. It is a slightly viscous, highly polar liquid commonly used as a solvent in a variety of industrial applications such as in extractions, as a reaction medium, and as a cleaning solvent...
(the first step here is a Henry reaction):

The reaction is also used in combination with the Michael reaction
Michael reaction
The Michael reaction or Michael addition is the nucleophilic addition of a carbanion or another nucleophile to an alpha, beta unsaturated carbonyl compound. It belongs to the larger class of conjugate additions. This is one of the most useful methods for the mild formation of C-C bonds...
in the synthesis of γ
Gamma
Gamma is the third letter of the Greek alphabet. In the system of Greek numerals it has a value of 3. It was derived from the Phoenician letter Gimel . Letters that arose from Gamma include the Roman C and G and the Cyrillic letters Ge Г and Ghe Ґ.-Greek:In Ancient Greek, gamma represented a...
-keto-carbonyls such as :

or 2,5-heptanedione
Hydrolysis of nitro compounds with strong acid without the intermediate salt stage results in the formation of carboxylic acid
Carboxylic acid
Carboxylic acids are organic acids characterized by the presence of at least one carboxyl group. The general formula of a carboxylic acid is R-COOH, where R is some monovalent functional group...
s and hydroxylamine
Hydroxylamine
Hydroxylamine is an inorganic compound with the formula NH2OH. The pure material is a white, unstable crystalline, hygroscopic compound. However, hydroxylamine is almost always provided and used as an aqueous solution. It is used to prepare oximes, an important functional group. It is also an...
salts.

The hydrolysis step of the Nef reaction can also be performed with Lewis acid
Lewis acid
]The term Lewis acid refers to a definition of acid published by Gilbert N. Lewis in 1923, specifically: An acid substance is one which can employ a lone pair from another molecule in completing the stable group of one of its own atoms. Thus, H+ is a Lewis acid, since it can accept a lone pair,...
s such as tin(IV) chloride
Tin(IV) chloride
Tin chloride, also known as tin tetrachloride or stannic chloride is a chemical compound with the formula SnCl4.At room temperature it is a colourless liquid, which fumes on contact with air, giving a stinging odor...
, or oxidants such as oxone.
The source of this article is wikipedia, the free encyclopedia.  The text of this article is licensed under the GFDL.