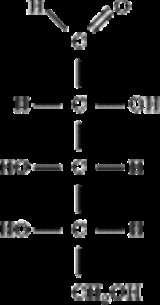 Overview
Arabinose is an aldopentose – a monosaccharide
Monosaccharide
Monosaccharides are the most basic units of biologically important carbohydrates. They are the simplest form of sugar and are usually colorless, water-soluble, crystalline solids. Some monosaccharides have a sweet taste. Examples of monosaccharides include glucose , fructose , galactose, xylose...
containing five carbon
Carbon
Carbon is the chemical element with symbol C and atomic number 6. As a member of group 14 on the periodic table, it is nonmetallic and tetravalent—making four electrons available to form covalent chemical bonds...
atom
Atom
The atom is a basic unit of matter that consists of a dense central nucleus surrounded by a cloud of negatively charged electrons. The atomic nucleus contains a mix of positively charged protons and electrically neutral neutrons...
s, and including an aldehyde
Aldehyde
An aldehyde is an organic compound containing a formyl group. This functional group, with the structure R-CHO, consists of a carbonyl center bonded to hydrogen and an R group....
(CHO) functional group
Functional group
In organic chemistry, functional groups are specific groups of atoms within molecules that are responsible for the characteristic chemical reactions of those molecules. The same functional group will undergo the same or similar chemical reaction regardless of the size of the molecule it is a part of...
.

For biosynthetic reasons, most saccharides are almost always more abundant in nature as the "D"-form, or structurally analogous to D-glyceraldehyde
Glyceraldehyde
Glyceraldehyde is a triose monosaccharide with chemical formula C3H6O3. It is the simplest of all common aldoses. It is a sweet, colorless, crystalline solid that is an intermediate compound in carbohydrate metabolism...
. However, L-arabinose is in fact more common than D-arabinose in nature and is found in nature as a component of biopolymers such as hemicellulose
Hemicellulose
A hemicellulose is any of several heteropolymers , such as arabinoxylans, present along with cellulose in almost all plant cell walls. While cellulose is crystalline, strong, and resistant to hydrolysis, hemicellulose has a random, amorphous structure with little strength...
and pectin
Pectin
Pectin is a structural heteropolysaccharide contained in the primary cell walls of terrestrial plants. It was first isolated and described in 1825 by Henri Braconnot...
.

How could you synthesize D(+) glucose from arabinose
More
x