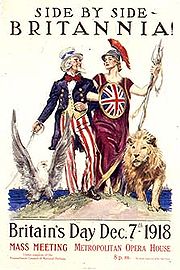 A national personification is an anthropomorphization
Anthropomorphism
Anthropomorphism is any attribution of human characteristics to animals, non-living things, phenomena, material states, objects or abstract concepts, such as organizations, governments, spirits or deities. The term was coined in the mid 1700s...
of a nation
Nation
A nation may refer to a community of people who share a common language, culture, ethnicity, descent, and/or history. In this definition, a nation has no physical borders. However, it can also refer to people who share a common territory and government irrespective of their ethnic make-up...
or its people; it can appear in both editorial cartoon
Editorial cartoon
An editorial cartoon, also known as a political cartoon, is an illustration containing a commentary that usually relates to current events or personalities....
s and propaganda
Propaganda
Propaganda is a form of communication that is aimed at influencing the attitude of a community toward some cause or position so as to benefit oneself or one's group....
.

Some early personifications in the Western world tended to be national manifestations of the majestic wisdom and war goddess Minerva
Minerva
Minerva was the Roman goddess whom Romans from the 2nd century BC onwards equated with the Greek goddess Athena. She was the virgin goddess of poetry, medicine, wisdom, commerce, weaving, crafts, magic...
/Athena
Athena
In Greek mythology, Athena, Athenê, or Athene , also referred to as Pallas Athena/Athene , is the goddess of wisdom, courage, inspiration, civilization, warfare, strength, strategy, the arts, crafts, justice, and skill. Minerva, Athena's Roman incarnation, embodies similar attributes. Athena is...
, and often took the Latin
Latin
Latin is an Italic language originally spoken in Latium and Ancient Rome. It, along with most European languages, is a descendant of the ancient Proto-Indo-European language. Although it is considered a dead language, a number of scholars and members of the Christian clergy speak it fluently, and...
name of the ancient Roman province
Roman province
In Ancient Rome, a province was the basic, and, until the Tetrarchy , largest territorial and administrative unit of the empire's territorial possessions outside of Italy...
. Examples of this type include Britannia, Germania
Germania (personification)
Germania is the personification of the German Nation or the Germans as a whole, most commonly associated with the Romantic Era and the Revolutions of 1848, though the figure was later used by Imperial Germany. She is usually shown wielding the "Reichsschwert" . Additionally, she is sometimes shown...
, Hibernia
Hibernia (personification)
Hibernia as a national personification representing Ireland appeared in numerous cartoon and drawings, especially in the nineteenth century.As depicted in frequent cartoons in Punch, a magazine outspokenly hostile to Irish nationalism, Hibernia was shown as "Britannia's younger sister". She is an...
, Helvetia
Helvetia
Helvetia is the female national personification of Switzerland, officially Confœderatio Helvetica, the "Helvetic Confederation".The allegory is typically pictured in a flowing gown, with a spear and a shield emblazoned with the Swiss flag, and commonly with braided hair, commonly with a wreath as...
and Polonia
Polonia (personification)
Polonia, the name for Poland in Latin and many Romance and other languages, is most often used in modern Polish as referring to the Polish diaspora...
. Representations of the citizenry of a nation—rather than of the nation itself—are Deutscher Michel
Deutscher Michel
Der Deutsche Michel is a figure representing the national character of the German people, rather as John Bull represents the British. Such figures differ from those that serve as personifications of the nation itself, as Germania does the German nation and Marianne the French...
and John Bull
John Bull
John Bull is a national personification of Britain in general and England in particular, especially in political cartoons and similar graphic works. He is usually depicted as a stout, middle-aged man, often wearing a Union Flag waistcoat.-Origin:...
.


Personifications by country or territory