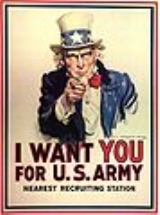 Uncle Sam is a common national personification
National personification
A national personification is an anthropomorphization of a nation or its people; it can appear in both editorial cartoons and propaganda.Some early personifications in the Western world tended to be national manifestations of the majestic wisdom and war goddess Minerva/Athena, and often took the...
of the American government originally used during the War of 1812
War of 1812
The War of 1812 was a military conflict fought between the forces of the United States of America and those of the British Empire. The Americans declared war in 1812 for several reasons, including trade restrictions because of Britain's ongoing war with France, impressment of American merchant...
. He is depicted as a stern elderly man with white hair and a goatee
Goatee
Goatee refers to a style of facial hair incorporating hair on a man’s chin. The exact nature of the style has varied according to time and culture.Traditionally, goatee refers solely to a beard formed by a tuft of hair on the chin...
beard. Typically he is dressed in clothing
Clothing
Clothing refers to any covering for the human body that is worn. The wearing of clothing is exclusively a human characteristic and is a feature of nearly all human societies...
that recalls the design elements of the flag of the United States
Flag of the United States
The national flag of the United States of America consists of thirteen equal horizontal stripes of red alternating with white, with a blue rectangle in the canton bearing fifty small, white, five-pointed stars arranged in nine offset horizontal rows of six stars alternating with rows...
—for example, a top hat
Top hat
A top hat, beaver hat, high hat silk hat, cylinder hat, chimney pot hat or stove pipe hat is a tall, flat-crowned, broad-brimmed hat, predominantly worn from the latter part of the 18th to the middle of the 20th century...
with red and white stripes and white stars on a blue band, and red and white striped trousers. The first use of Uncle Sam in literature was in the 1816 allegorical book The Adventures of Uncle Sam in Search After His Lost Honor by Frederick Augustus Fidfaddy, Esq.

Earlier representative figures of the United States included such beings as "Brother Jonathan
Brother Jonathan
Brother Jonathan was a fictional character created to personify the entire United States, in the early days of the country's existence.In editorial cartoons and patriotic posters, Brother Jonathan was usually depicted as a typical American revolutionary, with tri-cornered hat and long military jacket...
," used by Punch
Punch (magazine)
Punch, or the London Charivari was a British weekly magazine of humour and satire established in 1841 by Henry Mayhew and engraver Ebenezer Landells. Historically, it was most influential in the 1840s and 50s, when it helped to coin the term "cartoon" in its modern sense as a humorous illustration...
magazine. These were overtaken by Uncle Sam somewhere around the time of the Civil War
American Civil War
The American Civil War was a civil war fought in the United States of America. In response to the election of Abraham Lincoln as President of the United States, 11 southern slave states declared their secession from the United States and formed the Confederate States of America ; the other 25...
. The female personification "Columbia
Historical Columbia
Columbia is an historical and poetic name for America – and the early United States of America in particular, for which it is also the name of its female personification...
" has seldom been seen since the 1920s.
The well-known "recruitment" image of Uncle Sam was created by James Montgomery Flagg
James Montgomery Flagg
James Montgomery Flagg was an American artist and illustrator. He worked in media ranging from fine art painting to cartooning, but is best remembered for his political posters....
, an illustrator and portrait artist best known for commercial art. The image of Uncle Sam was shown publicly for the first time, according to some, in a picture by Flagg on the cover of the magazine Leslie's Weekly, on July 6, 1916, with the caption "What Are You Doing for Preparedness?" More than four million copies of this image were printed between 1917 and 1918. The image also was used extensively during World War II.

During this time America was codenamed 'Samland' by the German intelligence agency Abwehr.

There are two memorials to Uncle Sam, both of which commemorate the life of Samuel Wilson
Samuel Wilson
Samuel Wilson was a meat-packer from Troy, New York whose name is purportedly the source of the personification of the United States known as "Uncle Sam"....
: the Uncle Sam Memorial Statue
Uncle Sam Memorial Statue
The Uncle Sam Memorial Statue is a statue commemorating Samuel Wilson, perhaps the original Uncle Sam, near his birthplace in the center of Arlington, Massachusetts, USA. It was sculpted by Theodore Cotillo Barbarossa...
in Arlington, MA, his birthplace; and a memorial near his long-term residence in Riverfront Park, Troy, New York
Troy, New York
Troy is a city in the US State of New York and the seat of Rensselaer County. Troy is located on the western edge of Rensselaer County and on the eastern bank of the Hudson River. Troy has close ties to the nearby cities of Albany and Schenectady, forming a region popularly called the Capital...
.