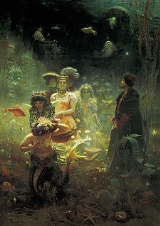 Overview
Slavic mythology is the mythological aspect of the polytheistic religion
Polytheism
Polytheism is the belief of multiple deities also usually assembled into a pantheon of gods and goddesses, along with their own mythologies and rituals....
that was practised by the Slavs before Christianisation.
The religion possesses many common traits with other religions descended from the Proto-Indo-European religion
Proto-Indo-European religion
Proto-Indo-European religion is the hypothesized religion of the Proto-Indo-European peoples based on the existence of similarities among the deities, religious practices and mythologies of the Indo-European peoples. Reconstruction of the hypotheses below is based on linguistic evidence using the...
. Unlike Greek
Greek mythology
Greek mythology is the body of myths and legends belonging to the ancient Greeks, concerning their gods and heroes, the nature of the world, and the origins and significance of their own cult and ritual practices. They were a part of religion in ancient Greece...
or Egyptian mythology
Egyptian mythology
Ancient Egyptian religion was a complex system of polytheistic beliefs and rituals which were an integral part of ancient Egyptian society. It centered on the Egyptians' interaction with a multitude of deities who were believed to be present in, and in control of, the forces and elements of nature...
, there are no first-hand records for the study of Slavic mythology. Despite some arguable theories (for instance, the Book of Veles
Book of Veles
The Book of Veles is a literary forgery claimed to be a text of ancient Slavic religion and history written on wooden planks.It contains religious passages and accounts of history interspersed with religious...
), it cannot be proven that the Slavs had any sort of writing system before the arrival of Saints Cyril and Methodius
Saints Cyril and Methodius
Saints Cyril and Methodius were two Byzantine Greek brothers born in Thessaloniki in the 9th century. They became missionaries of Christianity among the Slavic peoples of Bulgaria, Great Moravia and Pannonia. Through their work they influenced the cultural development of all Slavs, for which they...
to Slavic lands in 862.