Nasiriyah is a city in Iraq
Iraq
Iraq ; officially the Republic of Iraq is a country in Western Asia spanning most of the northwestern end of the Zagros mountain range, the eastern part of the Syrian Desert and the northern part of the Arabian Desert....
. It is on the Euphrates
Euphrates
The Euphrates is the longest and one of the most historically important rivers of Western Asia. Together with the Tigris, it is one of the two defining rivers of Mesopotamia...
about 225 miles (370 km) southeast of Baghdad
Baghdad
Baghdad is the capital of Iraq, as well as the coterminous Baghdad Governorate. The population of Baghdad in 2011 is approximately 7,216,040...
, near the ruins of the ancient city of Ur
Ur
Ur was an important city-state in ancient Sumer located at the site of modern Tell el-Muqayyar in Iraq's Dhi Qar Governorate...
. It is the capital of the province of Dhi Qar. According to the 1987 census the city had a population of 265,937 people; the estimated population in 2003 was 560,200.

The population of Nasiriyah is nearly exclusively Shī‘a Muslims
Islam
Islam . The most common are and .   : Arabic pronunciation varies regionally. The first vowel ranges from ~~. The second vowel ranges from ~~~...
with large Mandaean and Sunni muslim
Muslim
A Muslim, also spelled Moslem, is an adherent of Islam, a monotheistic, Abrahamic religion based on the Quran, which Muslims consider the verbatim word of God as revealed to prophet Muhammad. "Muslim" is the Arabic term for "submitter" .Muslims believe that God is one and incomparable...
communities, until 1951 the town was a home to a sizable Jewish community.
After the failed uprising of 1991, many families were massacred by Saddam Hussein's forces whilst thousands fled from Iraq to other countries such as the United States, United Kingdom, Canada, Australia and Sweden.

Nasiriyah is the centre of a date-growing area, but many other agricultural products are produced here as well. The city's industries include boatbuilding, carpentry and silver working.

The old parts of the town are built mainly from sun-dried brick and this part of the town is still enclosed by a mud wall. The newer parts are dominated by standard Iraqi block buildings.

The city museum has a large collection of Sumer
Sumer
Sumer was a civilization and historical region in southern Mesopotamia, modern Iraq during the Chalcolithic and Early Bronze Age....
ian, Assyria
Assyria
Assyria was a Semitic Akkadian kingdom, extant as a nation state from the mid–23rd century BC to 608 BC centred on the Upper Tigris river, in northern Mesopotamia , that came to rule regional empires a number of times through history. It was named for its original capital, the ancient city of Assur...
n, Babylonia
Babylonia
Babylonia was an ancient cultural region in central-southern Mesopotamia , with Babylon as its capital. Babylonia emerged as a major power when Hammurabi Babylonia was an ancient cultural region in central-southern Mesopotamia (present-day Iraq), with Babylon as its capital. Babylonia emerged as...
n, and Abbasid
Abbasid
The Abbasid Caliphate or, more simply, the Abbasids , was the third of the Islamic caliphates. It was ruled by the Abbasid dynasty of caliphs, who built their capital in Baghdad after overthrowing the Umayyad caliphate from all but the al-Andalus region....
artifacts. The ruins of the ancient cities of Ur
Ur
Ur was an important city-state in ancient Sumer located at the site of modern Tell el-Muqayyar in Iraq's Dhi Qar Governorate...
and Larsa
Larsa
Larsa was an important city of ancient Sumer, the center of the cult of the sun god Utu. It lies some 25 km southeast of Uruk in Iraq's Dhi Qar Governorate, near the east bank of the Shatt-en-Nil canal at the site of the modern settlement Tell as-Senkereh or Sankarah.-History:According to...
are located nearby.

The city was founded in 1872 by Sheikh
Sheikh
Not to be confused with sikhSheikh — also spelled Sheik or Shaikh, or transliterated as Shaykh — is an honorific in the Arabic language that literally means "elder" and carries the meaning "leader and/or governor"...
Nasir Al Sadoon of the Muntafiq tribal confederation, after whom it is named. During World War I
World War I
World War I , which was predominantly called the World War or the Great War from its occurrence until 1939, and the First World War or World War I thereafter, was a major war centred in Europe that began on 28 July 1914 and lasted until 11 November 1918...
the British
United Kingdom
The United Kingdom of Great Britain and Northern IrelandIn the United Kingdom and Dependencies, other languages have been officially recognised as legitimate autochthonous languages under the European Charter for Regional or Minority Languages...
conquered the city, controlled at the time by the Ottoman Empire
Ottoman Empire
The Ottoman EmpireIt was usually referred to as the "Ottoman Empire", the "Turkish Empire", the "Ottoman Caliphate" or more commonly "Turkey" by its contemporaries...
, in July 1915. Some 400 British and Indian and up to 2,000 Turkish
Turkey
Turkey , known officially as the Republic of Turkey , is a Eurasian country located in Western Asia and in East Thrace in Southeastern Europe...
soldiers were killed in the battle for Nasiriyah on 24 July 1915. 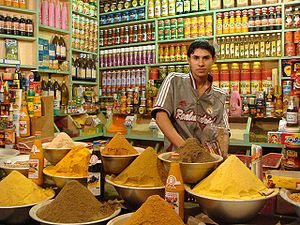 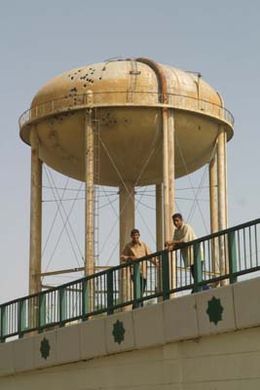 During 1940s the city was the chamber for oppositions to monarchy and to the feudal system. Students union, Peasants association, and workers played an important role in sensitizing people to the nature of corruption and abuses which were committed by the government in Baghdad and its supporters. These associations under the leadership of the Communist Party were instrumental in setting the stage for July 14, 1958 Revolution. Hassan al-atybai and Aziz Al-Syed Jasim along with many intellectuals led the public celebrations which took place in many part of the governorate immediately after the Revolution.

During the 1991 Gulf War
Gulf War
The Persian Gulf War , commonly referred to as simply the Gulf War, was a war waged by a U.N.-authorized coalition force from 34 nations led by the United States, against Iraq in response to Iraq's invasion and annexation of Kuwait.The war is also known under other names, such as the First Gulf...
, Nasiriyah marked the furthest point to which coalition forces penetrated Iraq, with the United States
United States
The United States of America is a federal constitutional republic comprising fifty states and a federal district...
82nd Airborne Division reaching the main road just outside the city. In March 1991, following the American withdrawal at the war's end, the Shia population of Nasiriyah took part in the revolt against the rule of Saddam Hussein
Saddam Hussein
Saddam Hussein Abd al-Majid al-Tikriti was the fifth President of Iraq, serving in this capacity from 16 July 1979 until 9 April 2003...
. The revolt was violently subdued by the Iraqi military with heavy loss of life and much physical damage.

Until the 2003 war, Nasiriyah was home to one of the biggest communities of Mandeans in Iraq.

In March 2003, Nasiriyah was one of the first major battles of the 2003 invasion of Iraq
2003 invasion of Iraq
The 2003 invasion of Iraq , was the start of the conflict known as the Iraq War, or Operation Iraqi Freedom, in which a combined force of troops from the United States, the United Kingdom, Australia and Poland invaded Iraq and toppled the regime of Saddam Hussein in 21 days of major combat operations...
. Phillip Mitchell of the International Institute for Strategic Studies
International Institute for Strategic Studies
The International Institute for Strategic Studies is a British research institute in the area of international affairs. It describes itself as "the world’s leading authority on political-military conflict"...
described Nasiriyah's strategic importance to The Guardian
The Guardian
The Guardian, formerly known as The Manchester Guardian , is a British national daily newspaper in the Berliner format...
: "Nasiriyah is a major administrative headquarters and is also [Iraqi General] Majid's military district headquarters. It is a major strategic crossing point of the Euphrates. For all those reasons Nasiriyah will be well defended, which will slow the Mech [invasion] down for a while."

On March 23, a US convoy was ambushed near the city, killing 11 soldiers and resulting in multiple soldiers, including Private Jessica Lynch
Jessica Lynch
Jessica Dawn Lynch is a former Private First Class in the United States Army Quartermaster Corps. Lynch served in Iraq during the 2003 invasion by U.S. and allied forces. On March 23, 2003 she was injured and captured by Iraqi forces but was recovered on April 1 by U.S...
and Specialist Shoshana Johnson
Shoshana Johnson
Shoshana Nyree Johnson is a Panamanian former United States soldier, and was the first black female prisoner of war in the military history of the United States. Johnson was a Specialist of the U.S. Army 507th Maintenance Company, 5/52 ADA BN, 11th ADA Brigade. During a gun fight that led to her...
, becoming prisoners of war during the conflict. Heavy fighting
Battle of Nasiriyah
The Battle of Nasiriyah was one of the first major battles of the 2003 invasion of Iraq. Heavy fighting took place in the southern Iraqi city of Nasiriyah between Iraqi forces and U.S. Marines over control of key bridges over the Euphrates River and the Saddam Canal.The battle began early on 23...
took place between Iraqi forces and the 2nd Marine Expeditionary Brigade under the call sign "Task Force Tarawa
Task Force Tarawa
Task Force Tarawa was the name given to the 2nd Marine Expeditionary Brigade during the 2003 invasion of Iraq. They were a Marine Air-Ground Task Force commanded by Brigadier General Richard F...
" of the US Marine Corps between about March 23 and March 29, in which 18 Marines were killed and over 150 were wounded, including a number hit by friendly fire from Air Force A-10 aircraft, but the Iraqi resistance was crushed fairly rapidly thereafter. The town has been relatively calm since the fall of Saddam Hussein. A truck bomb killed 19 Italian
Italy
Italy , officially the Italian Republic languages]] under the European Charter for Regional or Minority Languages. In each of these, Italy's official name is as follows:;;;;;;;;), is a unitary parliamentary republic in South-Central Europe. To the north it borders France, Switzerland, Austria and...
soldiers and 11 civilians in November 2003 (see 2003 Nasiriyah bombing
2003 Nasiriyah bombing
The 2003 Nasiriyah bombing was a suicide attack on the Italian military police headquarters in Nasiriyah, Iraq, south of Baghdad on November 12, 2003.-Prelude:...
), and clashes erupted here in April 2004 during the Mahdi uprising.