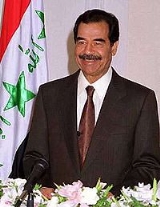 Overview
Saddam Hussein Abd al-Majid al-Tikriti (Arabic
Arabic alphabet
The Arabic alphabet or Arabic abjad is the Arabic script as it is codified for writing the Arabic language. It is written from right to left, in a cursive style, and includes 28 letters. Because letters usually stand for consonants, it is classified as an abjad.-Consonants:The Arabic alphabet has...
: ; 28 April 1937 – 30 December 2006) was the fifth President
President of Iraq
The President of Iraq is the head of state of Iraq and "safeguards the commitment to the Constitution and the preservation of Iraq's independence, sovereignty, unity, the security of its territories in accordance with the provisions of the Constitution." The President is elected by the Council of...
of Iraq
Iraq
Iraq ; officially the Republic of Iraq is a country in Western Asia spanning most of the northwestern end of the Zagros mountain range, the eastern part of the Syrian Desert and the northern part of the Arabian Desert....
, serving in this capacity from 16 July 1979 until 9 April 2003. A leading member of the revolutionary Arab Socialist Ba'ath Party, and later, the Baghdad-based Ba'ath Party and it's regional organisation Ba'ath Party – Iraq Region
Arab Socialist Ba'ath Party – Iraq Region
The Arab Socialist Ba'ath Party – Iraq Region is a ba'athist regional organisation founded in 1951 by Fuad al-Rikabi...
, which espoused a mix of Arab nationalism
Arab nationalism
Arab nationalism is a nationalist ideology celebrating the glories of Arab civilization, the language and literature of the Arabs, calling for rejuvenation and political union in the Arab world...
and Arab socialism
Arab socialism
Arab socialism is a political ideology based on an amalgamation of Pan-Arabism and socialism. Arab socialism is distinct from the much broader tradition of socialist thought in the Arab world, which predates Arab socialism by as much as fifty years...
, Saddam played a key role in the 1968 coup that brought the party to long-term power of Iraq.

What was Saddam Hussein

Did his rule have two armies?

What was the first he do as president?

What was he hanged on the grounds of?
More

1990    Saddam Hussein appears on Iraqi state television with a number of Western "guests" (actually hostages) to try to prevent the Gulf War.

2002    A group of Iraqis opposed to the regime of Saddam Hussein take over the Iraqi Embassy in Berlin for five hours before releasing their hostages and surrendering.

2003    2003 invasion of Iraq: Baghdad falls to American forces;Saddam Hussein statue topples as Iraqis turn on symbols of their former leader, pulling down the statue and tearing it to pieces.

2003    Members of 101st Airborne of the United States, aided by Special Forces, attack a compound in Iraq, killing Saddam Hussein's sons Uday and Qusay, along with Mustapha Hussein, Qusay's 14-year old son, and a bodyguard.

The most important thing about marriage is that the man must not let the woman feel downtrodden simply because she is a woman and he is a man.

Interview with the Al-Mar'a magazine in 1978.

The great duel, the mother of all battles has begun. The dawn of victory nears as this great showdown begins!