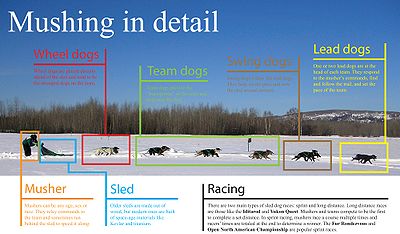 Mushing is a general term for a sport
Sport
A Sport is all forms of physical activity which, through casual or organised participation, aim to use, maintain or improve physical fitness and provide entertainment to participants. Sport may be competitive, where a winner or winners can be identified by objective means, and may require a degree...
or transport
Transport
Transport or transportation is the movement of people, cattle, animals and goods from one location to another. Modes of transport include air, rail, road, water, cable, pipeline, and space. The field can be divided into infrastructure, vehicles, and operations...
method powered by dog
Dog
The domestic dog is a domesticated form of the gray wolf, a member of the Canidae family of the order Carnivora. The term is used for both feral and pet varieties. The dog may have been the first animal to be domesticated, and has been the most widely kept working, hunting, and companion animal in...
s, and includes carting
Carting
Carting is a dog sport or activity in which a dog pulls a Dogcart filled with supplies, such as farm goods or firewood, but sometimes pulling people. Carting as a sport is also known as dryland mushing and is practiced all around the world, often to keep winter sled dogs in competition form during...
, pulka
Pulka
A pulk is a Scandinavian short, low-slung small toboggan used in sport or for transport, pulled by a dog or a skier. The name of the sport is pulka. The sled can be used to carry supplies such as a tent or food, or transport a child or other person...
, scootering
Dog scootering
Dog scootering is a sport where one or more dogs pull a human riding an unmotorized kick scooter. It is similar to mushing, which is done in the winter, but generally with fewer dogs and with a scooter instead of a dogsled. The dogs wear the same harnesses that sled dogs wear, and are hooked to...
, sled dog racing, skijoring
Skijoring
Skijoring is a winter sport where a person on skis is pulled by a horse, a dog or a motor vehicle. It is derived from the Norwegian word skikjøring meaning ski driving.- Dog skijoring :...
, freighting
Freighting
Freighting refers to the hauling of cargo, historically, using a dog team to mush goods cross-country. During the North American gold rushes, such as the Klondike Gold Rush, dogs were valuable draft animals, going where horses could not and withstanding harsher weather.Dog teams were commonly used...
, and weight pulling
Weight pulling
Weight pulling is a dog sport involving a dog pulling a cart or sled loaded with weight a short distance across dirt/gravel, grass, carpet, or snow. It is a modern adaptation of freighting, in which dogs were used as freight animals to move cargo. Many breeds participate in this sport, with dogs...
. More specifically, it implies the use of one or more dogs to pull a sled
Sled
A sled, sledge, or sleigh is a land vehicle with a smooth underside or possessing a separate body supported by two or more smooth, relatively narrow, longitudinal runners that travels by sliding across a surface. Most sleds are used on surfaces with low friction, such as snow or ice. In some cases,...
on snow
Snow
Snow is a form of precipitation within the Earth's atmosphere in the form of crystalline water ice, consisting of a multitude of snowflakes that fall from clouds. Since snow is composed of small ice particles, it is a granular material. It has an open and therefore soft structure, unless packed by...
or a rig
Rig
Rig may refer to:* Rig, Something that a dog pulls when Mushing* Rig, a slang term referring to a tractor unit* Drilling rig, a structure housing equipment used to drill or extract oil from underground* Gaming rig, a PC built for high-performance gaming...
on dry land. The term is thought to come from the French word marche, or go, run, the command to the team to commence pulling. "Mush!" is rarely used in modern parlance, however; "Hike!" is more common in English. Mushing can be utilitarian, recreational, or competitive.

Mushing as a sport is practiced worldwide, but primarily in North America
North America
North America is a continent wholly within the Northern Hemisphere and almost wholly within the Western Hemisphere. It is also considered a northern subcontinent of the Americas...
and northern Europe
Europe
Europe is, by convention, one of the world's seven continents. Comprising the westernmost peninsula of Eurasia, Europe is generally 'divided' from Asia to its east by the watershed divides of the Ural and Caucasus Mountains, the Ural River, the Caspian and Black Seas, and the waterways connecting...
. Racing associations such as the International Federation of Sleddog Sports (IFSS) and the International Sled Dog Racing Association (ISDRA) are working toward organizing the sport and in gaining Olympic
Olympic Games
The Olympic Games is a major international event featuring summer and winter sports, in which thousands of athletes participate in a variety of competitions. The Olympic Games have come to be regarded as the world’s foremost sports competition where more than 200 nations participate...
recognition for mushing. It is the state sport of Alaska
Alaska
Alaska is the largest state in the United States by area. It is situated in the northwest extremity of the North American continent, with Canada to the east, the Arctic Ocean to the north, and the Pacific Ocean to the west and south, with Russia further west across the Bering Strait...
.

Although dogsled racing
Dogsled racing
Sled dog racing is a winter dog sport most popular in the Arctic regions of the United States, Canada, Russia, and some European countries. It involves the timed competition of teams of sleddogs that pull a sled with the dog driver or musher standing on the runners...
gets more publicity and is seen now as the primary form of mushing, recreational mushing thrives as an unorganized sport providing healthy outdoor form of winter exercise for families.

Mushing for utilitarian purposes includes anything from hauling wood or delivering milk or the mail to rural travel
Travel
Travel is the movement of people or objects between relatively distant geographical locations. 'Travel' can also include relatively short stays between successive movements.-Etymology:...
and equipment hauling. Dogs have been replaced by snowmobile
Snowmobile
A snowmobile, also known in some places as a snowmachine, or sled,is a land vehicle for winter travel on snow. Designed to be operated on snow and ice, they require no road or trail. Design variations enable some machines to operate in deep snow or forests; most are used on open terrain, including...
s in many places, but some trappers and other isolated users have gone back to sled dog
Sled dog
Sled dogs, known also as sleigh man dogs, sledge dogs, or sleddogs, are highly trained types of dogs that are used to pull a dog sled, a wheel-less vehicle on runners also called a sled or sleigh, over snow or ice, by means of harnesses and lines.Sled dogs have become a popular winter recreation...
s, finding them safer and more dependable in extreme weather conditions.

Dog team members are given titles according to their position in the team relative to the sled. These include leaders or lead dogs, swing dogs, team dogs, and wheelers or wheel dogs.

Lead dogs steer the rest of the team and set the pace. Leaders may be single or double; the latter is more common now, though single leaders used to be more common during the mid-twentieth century. Sometimes a leader may be unhitched (a loose or free leader) to find the trail for the rest of the team, but the practice is uncommon and is not allowed at races. Qualities for a good lead dog are intelligence, initiative, common sense, and the ability to find a trail in bad conditions.

Swing dogs or point dogs are directly behind the leader (one dog if the team is in single hitch). They swing the rest of the team behind them in turns or curves on the trail. (Some mushers use the term swing dog to denote a team dog.)

Team dogs are those between the wheelers and the swing dogs, and add power to the team. A small team may not have dogs in this position. Alternatively, the term may be used to describe any dog in a dog team.

Wheel dogs are those nearest the sled, and a good wheeler must have a relatively calm temperament so as not to be startled by the sled moving just behind it. Strength, steadiness, and ability to help guide the sled around tight curves are qualities valued in "wheelers."