Encyclopedia
Municipalities are the second-level administrative division in Mexico
Mexico
The United Mexican States , commonly known as Mexico , is a federal constitutional republic in North America. It is bordered on the north by the United States; on the south and west by the Pacific Ocean; on the southeast by Guatemala, Belize, and the Caribbean Sea; and on the east by the Gulf of...
(where the first-level administrative division is the estado, or state). There are 2,438 municipalities in Mexico, making the average municipality population 45,616. The internal political organization and their responsibilities are outlined in the 115th article of the 1917 Constitution and further expanded in the constitutions of the states to which they belong.

All Mexican states are divided into municipalities. Each municipality is administratively autonomous; citizens elect a "municipal president
Municipal president
A presidente municipal is the chief of government of municipios in Mexico. The position is comparable to the county executive of a county in the United States or to the mayor of a city in the United States, although the jurisdiction of a presidente municipal includes not only a city but the...
" (presidente municipal) who heads an ayuntamiento or municipal council, responsible for providing all the public services for their constituents. This concept, which originated after the Mexican Revolution
Mexican Revolution
The Mexican Revolution was a major armed struggle that started in 1910, with an uprising led by Francisco I. Madero against longtime autocrat Porfirio Díaz. The Revolution was characterized by several socialist, liberal, anarchist, populist, and agrarianist movements. Over time the Revolution...
, is known as a municipio libre ("free municipality"). A municipal president heads the ayuntamiento
Ayuntamiento
Ayuntamiento In other languages of Spain:*Catalan/Valencian .*Galician .*Basque . is the general term for the council of a municipality, or sometimes the municipality itself, in Spain and Latin America. Historically Ayuntamiento was often preceded by the word excelentísimo , when referring to...
(municipal council). The municipal president is elected by plurality
Plurality voting system
The plurality voting system is a single-winner voting system often used to elect executive officers or to elect members of a legislative assembly which is based on single-member constituencies...
and cannot be reelected for the next immediate term. The municipal council consists of a cabildo
Cabildo (council)
For a discussion of the contemporary Spanish and Latin American cabildo, see Ayuntamiento.A cabildo or ayuntamiento was a former Spanish, colonial administrative council that governed a municipality. Cabildos were sometimes appointed, sometimes elected, but were considered to be representative of...
(chairman) with a síndico
Syndic
Syndic , a term applied in certain countries to an officer of government with varying powers, and secondly to a representative or delegate of a university, institution or other corporation, entrusted with special functions or powers.The meaning which underlies both applications is that of...
and several regidores (trustees).

If the municipality covers a large area and contains more than one city or town (collectively called localidades), one city or town is selected as a cabecera municipal (head city, seat of the municipal government) while the rest elect representatives to a presidencia auxiliar or junta auxiliar (auxiliary presidency or council). In that sense, a municipality in Mexico is roughly equivalent to the counties
County (United States)
In the United States, a county is a geographic subdivision of a state , usually assigned some governmental authority. The term "county" is used in 48 of the 50 states; Louisiana is divided into parishes and Alaska into boroughs. Parishes and boroughs are called "county-equivalents" by the U.S...
of the United States
United States
The United States of America is a federal constitutional republic comprising fifty states and a federal district...
, whereas the auxiliary presidency is equivalent to a township. Nonetheless, auxiliary presidencies are not considered a third-level administrative division since they depend fiscally on the municipalities in which they are located.

North-western and south-eastern states are divided into small numbers of large municipalities (e.g. Baja California
Baja California
Baja California officially Estado Libre y Soberano de Baja California is one of the 31 states which, with the Federal District, comprise the 32 Federal Entities of Mexico. It is both the northernmost and westernmost state of Mexico. Before becoming a state in 1953, the area was known as the North...
is divided into only five municipalities), and therefore they cover large areas incorporating several separated cities or towns that do not necessarily conform to one single conurbation. Central and southern states, on the other hand, are divided into a large number of small municipalities (e.g. Oaxaca
Oaxaca
Oaxaca , , officially Estado Libre y Soberano de Oaxaca is one of the 31 states which, along with the Federal District, comprise the 32 federative entities of Mexico. It is divided into 571 municipalities; of which 418 are governed by the system of customs and traditions...
is divided into 570 municipalities), and therefore large urban areas usually extend over several municipalities which form one single conurbation. Although an urban area might cover an entire municipality, auxiliary councils might still be used for administrative purposes.

Municipalities are responsible for public services (such as water and sewerage), street lighting, public safety, traffic, supervision of slaughterhouses and the cleaning and maintenance of public parks, gardens and cemeteries. They may also assist the state and federal governments in education, emergency fire and medical services, environmental protection and maintenance of monuments and historical landmarks. Since 1983, they can collect property taxes and user fees, although more funds are obtained from the state and federal governments than from their own collection efforts.

Since the Conquest and colonization of Mexico, the municipality became the basic entity of the administrative organization of New Spain
New Spain
New Spain, formally called the Viceroyalty of New Spain , was a viceroyalty of the Spanish colonial empire, comprising primarily territories in what was known then as 'América Septentrional' or North America. Its capital was Mexico City, formerly Tenochtitlan, capital of the Aztec Empire...
and the Spanish Empire
Spanish Empire
The Spanish Empire comprised territories and colonies administered directly by Spain in Europe, in America, Africa, Asia and Oceania. It originated during the Age of Exploration and was therefore one of the first global empires. At the time of Habsburgs, Spain reached the peak of its world power....
. Settlements located in strategic locations received the status of city (the highest status within the Empire, superior to that of villas and pueblos) and were entitled to form an ayuntamiento or municipality. After Independence, the 1824 Constitution
1824 Constitution of Mexico
The Federal Constitution of the United Mexican States of 1824 was enacted on October 4 of 1824, after the overthrow of the Mexican Empire of Agustin de Iturbide. In the new constitution, the republic took the name of United Mexican States, and was defined as a representative federal republic, with...
did not specify any regulation for the municipalities, whose structure and responsibilities were to be outlined in the constitution of each state of the federation. As such, every state set its own requirements for a settlement to become a municipality (usually based on population). The Constitution of 1917 abolished the jefatura política ("political authority"), the intermediate administrative authority between the states and converted all existing municipalities into municipios libres ("free municipalities"), that is, gave them full autonomy to manage local affairs, while at the same time restricting the scope of their competencies. However, in 1983 the 115th article was modified to expand the municipalities' authority to raise revenue (through property taxes and other local services) and to formulate budgets. 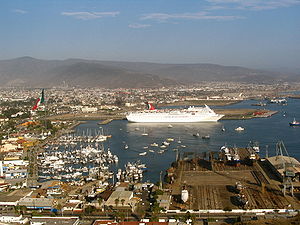 Mexico City
Mexico City
Mexico City is the Federal District , capital of Mexico and seat of the federal powers of the Mexican Union. It is a federal entity within Mexico which is not part of any one of the 31 Mexican states but belongs to the federation as a whole...
is a special case in that it is not organized as a municipality, but as a federal district
Federal district
Federal districts are a type of administrative division of a federation, under the direct control of a federal government. They exist in various countries and states all over the world.-United States:...
as the capital of the federation. It is administered through the Government of the Federal District and it has its own unicameral Legislative Assembly
Legislative Assembly
Legislative Assembly is the name given in some countries to either a legislature, or to one of its branch.The name is used by a number of member-states of the Commonwealth of Nations, as well as a number of Latin American countries....
. For administrative purposes, the Federal District is subdivided into delegaciones
Boroughs of the Mexican Federal District
Mexico City — politically and administratively constituted as the Federal District — is divided into sixteen boroughs for administrative purposes. They constitute second-level administrative divisions, on par with the municipalities of Mexico. However, unlike municipalities, they do not have...
or boroughs. While not fully equivalent to a municipality, since 2000 they enjoy a certain degree of political autonomy, in that residents within a borough directly elect a local borough head of government (called jefe delegacional). However, boroughs do not form local [municipal] councils nor are they constituted by a group of trustees. They do not have regulatory powers, which are mostly centralized in the Federal District government. The majority of the city's public services are organized by the Federal District even if part of the administration responsibilities are carried out by the boroughs. Despite this, at the federal level, the delegaciones of the Federal District are considered a second-level territorial division in statistical data collection and cross-municipal comparisons.