The seat of the U.S. federal government in Washington
Washington, D.C.
Washington, D.C., formally the District of Columbia and commonly referred to as Washington, "the District", or simply D.C., is the capital of the United States. On July 16, 1790, the United States Congress approved the creation of a permanent national capital as permitted by the U.S. Constitution....
is a federal district known as the "District of Columbia", which is not part of any state
U.S. state
A U.S. state is any one of the 50 federated states of the United States of America that share sovereignty with the federal government. Because of this shared sovereignty, an American is a citizen both of the federal entity and of his or her state of domicile. Four states use the official title of...
. In main addition, the U.S. government has several other kinds of "federal districts" which are not specifically related to a capital city: 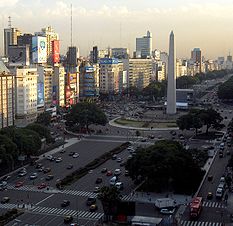 The term Distrito Federal, meaning "Federal District" in both the Spanish
Spanish language
Spanish , also known as Castilian , is a Romance language in the Ibero-Romance group that evolved from several languages and dialects in central-northern Iberia around the 9th century and gradually spread with the expansion of the Kingdom of Castile into central and southern Iberia during the...
and Portuguese language
Portuguese language
Portuguese is a Romance language that arose in the medieval Kingdom of Galicia, nowadays Galicia and Northern Portugal. The southern part of the Kingdom of Galicia became independent as the County of Portugal in 1095...
s, is used to refer to:

In Malaysia, the term Federal Territory
Federal Territory
The Federal Territories in Malaysia comprise three territories: Kuala Lumpur, Putrajaya and Labuan, governed directly by the federal government of Malaysia. Kuala Lumpur is the national capital of Malaysia, Putrajaya is the administrative capital, and Labuan is an offshore international financial...
(Malay: Wilayah Persekutuan) is used for the three territories governed directly by the federal government, namely Kuala Lumpur
Kuala Lumpur
Kuala Lumpur is the capital and the second largest city in Malaysia by population. The city proper, making up an area of , has a population of 1.4 million as of 2010. Greater Kuala Lumpur, also known as the Klang Valley, is an urban agglomeration of 7.2 million...
(national capital), Putrajaya
Putrajaya
Putrajaya is a planned city, located 25km south of Kuala Lumpur, that serves as the federal administrative centre of Malaysia. The seat of government was shifted in 1999 from Kuala Lumpur to Putrajaya, due to the overcrowding and congestion in the Kuala Lumpur areas...
(federal government administrative centre) and Labuan Island (international offshore financial centre
Offshore financial centre
An offshore financial centre , though not precisely defined, is usually a small, low-tax jurisdiction specializing in providing corporate and commercial services to non-resident offshore companies, and for the investment of offshore funds....
).

In India
India
India , officially the Republic of India , is a country in South Asia. It is the seventh-largest country by geographical area, the second-most populous country with over 1.2 billion people, and the most populous democracy in the world...
, the term Union Territory
Union Territory
A Union Territory is a sub-national administrative division of India, in the federal framework of governance. Unlike the states of India, which have their own elected governments, union territories are ruled directly by the federal government; the President of India appoints an Administrator or...
is used for the seven territories governed indirectly by the federal national government with its own Chief minister and governor of Delhi
Delhi
Delhi , officially National Capital Territory of Delhi , is the largest metropolis by area and the second-largest by population in India, next to Mumbai. It is the eighth largest metropolis in the world by population with 16,753,265 inhabitants in the Territory at the 2011 Census...
, others namely include - Andaman and Nicobar Islands, Chandigarh
Chandigarh
Chandigarh is a union territory of India that serves as the capital of two states, Haryana and Punjab. The name Chandigarh translates as "The Fort of Chandi". The name is from an ancient temple called Chandi Mandir, devoted to the Hindu goddess Chandi, in the city...
, Dadra and Nagar Haveli, Daman and Diu, Lakshadweep
Lakshadweep
Lakshadweep , formerly known as the Laccadive, Minicoy, and Amindivi Islands, is a group of islands in the Laccadive Sea, 200 to 440 km off the coast of the South West Indian state of Kerala...
and Pondicherry. Of these Delhi and Pondicherry possess partial statehoods with their own elected chief ministers.

In Pakistan
Pakistan
Pakistan , officially the Islamic Republic of Pakistan is a sovereign state in South Asia. It has a coastline along the Arabian Sea and the Gulf of Oman in the south and is bordered by Afghanistan and Iran in the west, India in the east and China in the far northeast. In the north, Tajikistan...
, the term Federal Territory is used for the five zones and 12 union councils of Islamabad
Union Councils of Pakistan
A sherwan or village council in Pakistan is an elected local government body consisting of 21 councillors, and headed by a nazim and a naib nazim...
governed directly by the state government as Islamabad Capital Territory
Islamabad Capital Territory
The Islamabad Capital Territory is one of the two federal territories of Pakistan. It includes Islamabad, the capital city of Pakistan, and covers an area of 1,165.5 km² of which 906 km² is Islamabad proper...
.

There are eight Federal districts of Russia
Federal districts of Russia
The federal districts are a level of administration for the convenience of the federal government of the Russian Federation. They are not the constituent units of Russia . Each district includes several federal subjects and each federal district has a presidential envoy...
, which function as an additional administrative layer between other subdivisions and the Russian Federation as a whole state. But these have nothing to do with the territory surrounding a capital city
Capital City
Capital City was a television show produced by Euston Films which focused on the lives of investment bankers in London living and working on the corporate trading floor for the fictional international bank Shane-Longman....
. However, there are also two cities of federal significance
Federal cities of Russia
The Russian Federation is divided into 83 federal subjects, two of which are federal cities....
, established by the Constitution - Moscow and Saint Petersburg. Each city is treated as separate subject of federation, and has its own legislative body. Such status is based on certain special functions which these two cities have, including location of federal government and federal judicial institutions.
The source of this article is wikipedia, the free encyclopedia.  The text of this article is licensed under the GFDL.