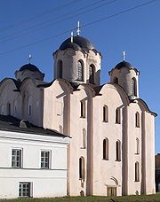 As his father's future successor, Mstislav reigned in Novgorod the Great from 1088–93 and (after a brief stint at Rostov
Rostov
Rostov is a town in Yaroslavl Oblast, Russia, one of the oldest in the country and a tourist center of the Golden Ring. It is located on the shores of Lake Nero, northeast of Moscow. Population:...
) from 1095–1117. Thereafter he was Monomakh's co-ruler in Belgorod Kievsky
Belgorod Kievsky
Bilhorod Kyivsky was a city-castle of Kievan Rus' on the right bank of Irpin River. The city was quite prominent in the 10th-12th centuries but ceased to exist after 1240 destruction of Kiev by the Mongols. Currently there is a small village of Bilohorodka, Kiev Oblast near the location of the...
, and inherited the Kievan throne after his death. He built numerous churches in Novgorod, of which St. Nicholas Cathedral (1113) and the cathedral of St Anthony Cloister (1117) survive to the present day. Later, he would also erect important churches in Kiev, notably his family sepulchre
Sepulchre
The rock-cut tombs in ancient Israel are a group of hundreds of rock-cut tombs constructed in Israel in ancient times. They were cut into the rock, sometimes with elaborate facades and multiple burial chambers. Some are free-standing, but most are caves. Each tomb typically belonged to a...
at Berestovo and the church of Our Lady at Podil
Podil
The Podil or Podilskyi Raion is a historic neighbourhood and an administrative raion in Kiev, the capital of Ukraine. It is one of the oldest neighborhoods of Kiev, the birthplace of the city's trade, commerce and industry...
.
Mstislav's life was spent in constant warfare with Cumans
Cumans
The Cumans were Turkic nomadic people comprising the western branch of the Cuman-Kipchak confederation. After Mongol invasion , they decided to seek asylum in Hungary, and subsequently to Bulgaria...
(1093, 1107, 1111, 1129), Estonia
Estonia
Estonia , officially the Republic of Estonia , is a state in the Baltic region of Northern Europe. It is bordered to the north by the Gulf of Finland, to the west by the Baltic Sea, to the south by Latvia , and to the east by Lake Peipsi and the Russian Federation . Across the Baltic Sea lies...
ns (1111, 1113, 1116, 1130), Lithuania
Lithuania
Lithuania , officially the Republic of Lithuania is a country in Northern Europe, the biggest of the three Baltic states. It is situated along the southeastern shore of the Baltic Sea, whereby to the west lie Sweden and Denmark...
ns (1131), and the princedom of Polotsk (1127, 1129). In 1096, he defeated his uncle Oleg of Chernigov on the Koloksha River, thereby laying foundation for the centuries of enmity between his and Oleg's descendants. Mstislav was the last ruler of united Rus
Kievan Rus'
Kievan Rus was a medieval polity in Eastern Europe, from the late 9th to the mid 13th century, when it disintegrated under the pressure of the Mongol invasion of 1237–1240....
, and upon his death, as the chronicler put it, "the land of Rus was torn apart".

Christine died on January 18, 1122; later that year Mstislav married again, to Liubava Dmitrievna, the daughter of Dmitry Zavidich, a nobleman of Novgorod. Their children were:

Through Euphrosyne, Mstislav is an ancestor of King Edward III of England
Edward III of England
Edward III was King of England from 1327 until his death and is noted for his military success. Restoring royal authority after the disastrous reign of his father, Edward II, Edward III went on to transform the Kingdom of England into one of the most formidable military powers in Europe...
and hence of all subsequent English and British monarchs. Through his mother Gytha, he is part of a link between Harold II of England and the modern line of English kings founded by William the Conqueror
William I of England
William I , also known as William the Conqueror , was the first Norman King of England from Christmas 1066 until his death. He was also Duke of Normandy from 3 July 1035 until his death, under the name William II...
, who deposed him.