Vladimir II Monomakh ' onMouseout='HidePop("84292")' href="/topics/Basil_(name)">Basileios
Basil (name)
The name Basil , , has origins from the male Greek name Vassilios which first appeared during the Hellenistic period. It is derived from "basileus" a Greek word of pre-Hellenic origin meaning "king", from which words such as basilica and basilisk , as well as the eponymous herb derive, and the...
) (1053 – May 19, 1125) was a Velikiy Kniaz (Grand Prince) of Kievan Rus'
Kievan Rus'
Kievan Rus was a medieval polity in Eastern Europe, from the late 9th to the mid 13th century, when it disintegrated under the pressure of the Mongol invasion of 1237–1240....
.
He was the son of Vsevolod I (married in 1046) and Anastasia of Byzantium (d.

Vladimir became the king or emperor of ?
More


Vladimir II Monomakh ' onMouseout='HidePop("84292")' href="/topics/Basil_(name)">Basileios
Basil (name)
The name Basil , , has origins from the male Greek name Vassilios which first appeared during the Hellenistic period. It is derived from "basileus" a Greek word of pre-Hellenic origin meaning "king", from which words such as basilica and basilisk , as well as the eponymous herb derive, and the...
) (1053 – May 19, 1125) was a Velikiy Kniaz (Grand Prince) of Kievan Rus'
Kievan Rus'
Kievan Rus was a medieval polity in Eastern Europe, from the late 9th to the mid 13th century, when it disintegrated under the pressure of the Mongol invasion of 1237–1240....
.

Eupraxia of Kiev
Eupraxia of Kiev
Eupraxia of Kiev was the daughter of Vsevolod I, Prince of Kiev and second wife of Henry IV, Holy Roman Emperor. She was the sister of Vladimir Monomakh....
, a sister of Vladimir, became notorious all over Europe
Europe
Europe is, by convention, one of the world's seven continents. Comprising the westernmost peninsula of Eurasia, Europe is generally 'divided' from Asia to its east by the watershed divides of the Ural and Caucasus Mountains, the Ural River, the Caspian and Black Seas, and the waterways connecting...
for her divorce
Divorce
Divorce is the final termination of a marital union, canceling the legal duties and responsibilities of marriage and dissolving the bonds of matrimony between the parties...
from the Holy Roman Emperor
Holy Roman Empire
The Holy Roman Empire was a realm that existed from 962 to 1806 in Central Europe.It was ruled by the Holy Roman Emperor. Its character changed during the Middle Ages and the Early Modern period, when the power of the emperor gradually weakened in favour of the princes...
Henry IV
Henry IV, Holy Roman Emperor
Henry IV was King of the Romans from 1056 and Holy Roman Emperor from 1084 until his forced abdication in 1105. He was the third emperor of the Salian dynasty and one of the most powerful and important figures of the 11th century...
on the grounds that he had attempted a black mass
Black Mass
A Black Mass is a ceremony supposedly celebrated during the Witches' Sabbath, which was a sacrilegious parody of the Catholic Mass. Its main objective was the profanation of the host, although there is no agreement among authors on how hosts were obtained or profaned; the most common idea is that...
on her naked body. 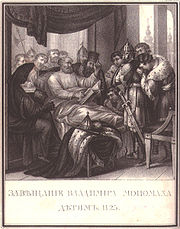 In his famous Instruction (also known as The Testament) to his own children, Monomakh mentions that he conducted 83 military campaigns and 19 times made peace with the Polovtsi
Cumans
The Cumans were Turkic nomadic people comprising the western branch of the Cuman-Kipchak confederation. After Mongol invasion , they decided to seek asylum in Hungary, and subsequently to Bulgaria...
. At first he waged war against the steppe jointly with his cousin Oleg, but after Vladimir was sent by his father to rule Chernigov and Oleg made peace with the Polovtsi to retake that city from him, they parted company. Since that time, Vladimir and Oleg were bitter enemies who would often engage in internecine wars. The enmity continued among their children and more distant posterity.

From 1094, his chief patrimony was the southern town of Pereyaslav
Pereiaslav-Khmelnytskyi
Pereiaslav-Khmelnytskyi is a town located where Alta River flows into Trubizh River in the Kiev Oblast in central Ukraine. Serving as the administrative center of the Pereiaslav-Khmelnytskyi Raion , the town itself is also designated as a separate raion within the oblast...
, although he also controlled Rostov
Rostov
Rostov is a town in Yaroslavl Oblast, Russia, one of the oldest in the country and a tourist center of the Golden Ring. It is located on the shores of Lake Nero, northeast of Moscow. Population:...
, Suzdal
Suzdal
Suzdal is a town in Vladimir Oblast, Russia, situated northeast of Moscow, from the city of Vladimir, on the Kamenka River. Population: -History:...
, and other northern provinces (see Principality of Pereyaslavl
Principality of Pereyaslavl
The Principality of Pereslavl was a regional principality of Kievan Rus from the end of 9th to 1302 based on the city of Pereyaslavl on the Trubezh river. It was usually administrated by younger sons of the Grand Prince of Kiev...
). In these lands he founded several towns, notably his namesake, Vladimir
Vladimir
Vladimir is a city and the administrative center of Vladimir Oblast, Russia, located on the Klyazma River, to the east of Moscow along the M7 motorway. Population:...
, the future capital of Russia. In order to unite the princes of Rus' in their struggle against the Great Steppe, Vladimir initiated three princely congress
Congress
A congress is a formal meeting of the representatives of different nations, constituent states, independent organizations , or groups....
es, the most important being held at Lyubech in 1097 and Dolobsk in 1103.

In 1107 he defeated Boniak
Boniak
Boniak Khan was a Cuman khan who led the invasions, together with Togortac, on Kievan Rus'. In 1096 Boniak attacked Kiev, plundered the Kiev Monastery of the Caves, and burned down the prince's palace in Berestovo. He was defeated in 1107 by the princes of Rus's forces, near Lubni...
, a Cuman khan
Khan (title)
Khan is an originally Altaic and subsequently Central Asian title for a sovereign or military ruler, widely used by medieval nomadic Turko-Mongol tribes living to the north of China. 'Khan' is also seen as a title in the Xianbei confederation for their chief between 283 and 289...
who led an invasions on Kievan Rus'
Kievan Rus'
Kievan Rus was a medieval polity in Eastern Europe, from the late 9th to the mid 13th century, when it disintegrated under the pressure of the Mongol invasion of 1237–1240....
. When Sviatopolk II
Sviatopolk II of Kiev
Sviatopolk II Iziaslavich was supreme ruler of the Kievan Rus for 20 years, from 1093 to 1113. He was not a popular prince, and his reign was marked by incessant rivalry with his cousin Vladimir Monomakh...
died in 1113, the Kiev
Kiev
Kiev or Kyiv is the capital and the largest city of Ukraine, located in the north central part of the country on the Dnieper River. The population as of the 2001 census was 2,611,300. However, higher numbers have been cited in the press....
an populace revolted and summoned Vladimir to the capital. The same year he entered Kiev to the great delight of the crowd and reigned there until his death in 1125. As may be seen from his Instruction, he promulgated a number of reforms in order to allay the social tensions in the capital. These years saw the last flowering of Ancient Rus, which was torn apart 10 years after his death.

Vladimir Monomakh is buried in the Saint Sophia Cathedral
Saint Sophia Cathedral in Kiev
Saint Sophia Cathedral in Kiev is an outstanding architectural monument of Kievan Rus'. Today, it is one of the city's best known landmarks and the first Ukrainian patrimony to be inscribed on the World Heritage List along with the Kiev Cave Monastery complex...
in Kiev
Kiev
Kiev or Kyiv is the capital and the largest city of Ukraine, located in the north central part of the country on the Dnieper River. The population as of the 2001 census was 2,611,300. However, higher numbers have been cited in the press....
. Succeeding generations often referred to his reign as the golden age
Golden Age
The term Golden Age comes from Greek mythology and legend and refers to the first in a sequence of four or five Ages of Man, in which the Golden Age is first, followed in sequence, by the Silver, Bronze, and Iron Ages, and then the present, a period of decline...
of that city. Numerous legends are connected with Monomakh's name, including the transfer from Constantinople
Constantinople
Constantinople was the capital of the Roman, Eastern Roman, Byzantine, Latin, and Ottoman Empires. Throughout most of the Middle Ages, Constantinople was Europe's largest and wealthiest city.-Names:...
to Rus of such precious relic
Relic
In religion, a relic is a part of the body of a saint or a venerated person, or else another type of ancient religious object, carefully preserved for purposes of veneration or as a tangible memorial...
s as the Theotokos of Vladimir
Theotokos of Vladimir
The Theotokos of Vladimir , also known as Our Lady of Vladimir or Virgin of Vladimir and "The Vladimir Madonna" - is one of the most venerated Orthodox icons and a typical example of Eleusa Byzantine iconography. The Theotokos is regarded as the holy protectress of Russia...
and the Vladimir/Muscovite crown called Monomakh's Cap
Monomakh's Cap
Monomakh's Cap , also called the Golden Cap , is one of the symbols of Russian autocracy, and is the oldest of the crowns currently exhibited at the Kremlin Armoury...
.

Vladimir was married three times. His first wife was Gytha of Wessex
Gytha of Wessex
Gytha of Wessex was one of several daughters of Edith Swanneck by Harold II, the last Anglo-Saxon king of England.According to Saxo Grammaticus, two of Harold's sons and a daughter escaped to the court of their uncle, king Sweyn Estridsson of Denmark. They were treated by Sweyn with hospitality,...
, daughter of Harold of England
Harold Godwinson
Harold Godwinson was the last Anglo-Saxon King of England.It could be argued that Edgar the Atheling, who was proclaimed as king by the witan but never crowned, was really the last Anglo-Saxon king...
who fell at Hastings
Battle of Hastings
The Battle of Hastings occurred on 14 October 1066 during the Norman conquest of England, between the Norman-French army of Duke William II of Normandy and the English army under King Harold II...
and Edith Swannesha. They had at least five children:


The following daughter has been attributed to both the first and the second wife: 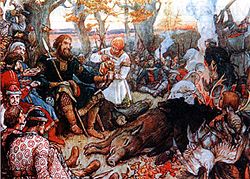 His third marriage is thought to have been to a daughter of Aepa Ocenevich, Khan of the Cumans
Cumans
The Cumans were Turkic nomadic people comprising the western branch of the Cuman-Kipchak confederation. After Mongol invasion , they decided to seek asylum in Hungary, and subsequently to Bulgaria...
. Her paternal grandfather was Osen. Her people belonged to the Kipchaks
Kipchaks
Kipchaks were a Turkic tribal confederation...
, a confederation of pastoralists and warriors of Turkic origin.

However the Primary Chronicle identifies Aepa as father-in-law to Yuri Dolgoruki. With Vladimir negotiating the marriage in name of his son. Whether father and son married sisters or the identity of intended groom was misadentified is unclear.