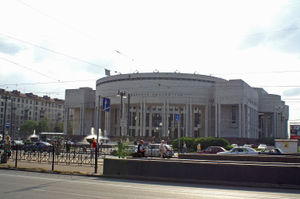 Moskovsky Prospekt
Prospekt (street)
A prospekt is a broad, multi-lane and usually straight street in urban areas. The term originated in Russian Empire, where in the first years of construction of St Petersburg the broadest avenues were called ""...
is a 10 km-long prospekt in Saint Petersburg
Saint Petersburg
Saint Petersburg is a city and a federal subject of Russia located on the Neva River at the head of the Gulf of Finland on the Baltic Sea...
, Russia
Russia
Russia or , officially known as both Russia and the Russian Federation , is a country in northern Eurasia. It is a federal semi-presidential republic, comprising 83 federal subjects...
. It runs from Sennaya Square
Sennaya Square
Sennaya Square or Sennaya Ploshchad , known as Peace Square between 1963 and 1991, is a large city square in Central Saint Petersburg, located at the crossing of Garden Street, Moskovsky Prospekt, and Grivtsova Lane....
and Sadovaya Street, to the Victory Square
Victory Square, Saint Petersburg
Victory Square in Saint Petersburg, Russia, is named after the Soviet victory in the Great Patriotic War. It is located in the very end of Moskovsky Prospekt near Pulkovo Airport – not in the central part of the city, despite this name being common in the former Soviet cities as a central...
, where it splits into Pulkovo Highway
M20 highway (Russia)
Russian route M20 or Pskov Highway is a Russian federal motorway St.Petersburg—Pskov—border with Belarus. It is part of the European route E95. Since Soviet times it is sometimes called "Kiev Highway"....
and Moscow Highway. It crosses Fontanka River, Zagorodny Prospekt, Obvodny Canal
Obvodny Canal
Obvodny Canal is the longest canal in Saint Petersburg, Russia, which in the 19th century served as the southern limit of the city. It is 8 km long and flows from the Neva River near Alexander Nevsky Lavra to the Yekaterinhofka not far from the sea port. The canal was dug in 1769-1780 and 1805-1833...
, and Ligovsky Prospekt
Ligovsky Prospekt
Ligovsky Prospekt is a major street in Saint Petersburg. Before the establishment of the city, it was a street leading to Novgorod, used by the people living in the villages around the delta of Neva....
. It is named for and leads to Moscow
Moscow
Moscow is the capital, the most populous city, and the most populous federal subject of Russia. The city is a major political, economic, cultural, scientific, religious, financial, educational, and transportation centre of Russia and the continent...
.

The prospekt began to develop as a part of the major route connecting the city with Moscow and south provinces. The original name of the prospekt was Tsarskoselskaya Doroga (Route to Tsarskoe Selo) since it leads to imperial estates in Tsarskoye Selo
Tsarskoye Selo
Tsarskoye Selo is the town containing a former Russian residence of the imperial family and visiting nobility, located south from the center of St. Petersburg. It is now part of the town of Pushkin and of the World Heritage Site Saint Petersburg and Related Groups of Monuments.-History:In...
. In the 1770s, marble mileposts were installed along the way; many have survived to this day. Another notable fact about the prospekt is that it coincides with the so-called Pulkovo Meridian
Pulkovo Observatory
The Pulkovo Astronomical Observatory астрономи́ческая обсервато́рия Росси́йской акаде́мии нау́к), the principal astronomical observatory of the Russian Academy of Sciences, located 19 km south of Saint Petersburg on Pulkovo Heights...
. Among historic buildings along the prospekt are Saint Petersburg State Institute of Technology
Saint Petersburg State Institute of Technology
Saint Petersburg State Institute of Technology is one of the oldest institutions of higher education in Russia , it currently trains around 5000 students.-History:...
, the New Smolny Convent with the adjacent Novodevichy Cemetery
Novodevichy Cemetery (Saint Petersburg)
Novodevichy Cemetery in Saint Petersburg is a historic cemetery in the South-West part of the city near the Moscow Triumphal Gate. The cemetery is named after the historical Resurrection Convent...
. The intersection with Ligovsky Prospekt
Ligovsky Prospekt
Ligovsky Prospekt is a major street in Saint Petersburg. Before the establishment of the city, it was a street leading to Novgorod, used by the people living in the villages around the delta of Neva....
features the Moscow Triumphal Gate designed by Vasily Stasov
Vasily Stasov
Vasily Petrovich Stasov was a Russian architect.-Biography:Stasov was born in Moscow....
and constructed in 1834-1838 to commemorate the victory in the Russo-Turkish War
Russo-Turkish War, 1828-1829
The Russo–Turkish War of 1828–1829 was sparked by the Greek War of Independence. The war broke out after the Sultan, incensed by the Russian participation in the Battle of Navarino, closed the Dardanelles for Russian ships and revoked the Akkerman Convention....
of 1828–1829. After the Russo-Turkish War, 1877-1878 the prospekt was renamed Zabalkansky (i.e., Transbalkanian), to memorialize the crossing of the Balkans by the Russian army.

South stretch of the prospekt features an ensemble of buildings built in the very distinctive Stalinist style
Stalinist architecture
Stalinist architecture , also referred to as Stalinist Gothic, or Socialist Classicism, is a term given to architecture of the Soviet Union between 1933, when Boris Iofan's draft for Palace of the Soviets was officially approved, and 1955, when Nikita Khrushchev condemned "excesses" of the past...
in the 1930-1950s. One of the most notable buildings among those is the House of Soviets
House of Soviets (Saint Petersburg)
The House of Soviets is the office building built in Stalinist style in the late 1930s in Saint Petersburg . It is located in the Moskovsky District of Saint Petersburg....
(1941) which was a military stronghold and command post during the Siege
Siege of Leningrad
The Siege of Leningrad, also known as the Leningrad Blockade was a prolonged military operation resulting from the failure of the German Army Group North to capture Leningrad, now known as Saint Petersburg, in the Eastern Front theatre of World War II. It started on 8 September 1941, when the last...
in World War II.