Encyclopedia
The National Library of Russia in St Petersburg, known as the State Public Saltykov-Shchedrin Library from 1932 to 1992 (i.e. in the Soviet
Soviet Union
The Soviet Union , officially the Union of Soviet Socialist Republics , was a constitutionally socialist state that existed in Eurasia between 1922 and 1991....
era), is the oldest public library
Public library
A public library is a library that is accessible by the public and is generally funded from public sources and operated by civil servants. There are five fundamental characteristics shared by public libraries...
in Russia
Russia
Russia or , officially known as both Russia and the Russian Federation , is a country in northern Eurasia. It is a federal semi-presidential republic, comprising 83 federal subjects...
. It should not be confused with the Russian State Library
Russian State Library
The Russian State Library is the national library of Russia, located in Moscow. It is the largest in the country and the third largest in the world for its collection of books . It was named the V. I...
, located in Moscow
Moscow
Moscow is the capital, the most populous city, and the most populous federal subject of Russia. The city is a major political, economic, cultural, scientific, religious, financial, educational, and transportation centre of Russia and the continent...
.

The Imperial Public Library was established in 1795 by Catherine the Great, whose private collections included the domestic libraries of Voltaire
Voltaire
François-Marie Arouet , better known by the pen name Voltaire , was a French Enlightenment writer, historian and philosopher famous for his wit and for his advocacy of civil liberties, including freedom of religion, free trade and separation of church and state...
and Diderot, which she had purchased from their heirs. Voltaire's personal library is still one of the highlights of the collection.

The cornerstone of the public library came from the Polish-Lithuanian Commonwealth
Polish-Lithuanian Commonwealth
The Polish–Lithuanian Commonwealth was a dualistic state of Poland and Lithuania ruled by a common monarch. It was the largest and one of the most populous countries of 16th- and 17th‑century Europe with some and a multi-ethnic population of 11 million at its peak in the early 17th century...
in the form of Załuski's Library (420,000 volumes), stolen by the Russians at the time of the partitions
Partitions of Poland
The Partitions of Poland or Partitions of the Polish–Lithuanian Commonwealth took place in the second half of the 18th century and ended the existence of the Polish–Lithuanian Commonwealth, resulting in the elimination of sovereign Poland for 123 years...
. Those books were only partially returned to Poland
Poland
Poland , officially the Republic of Poland , is a country in Central Europe bordered by Germany to the west; the Czech Republic and Slovakia to the south; Ukraine, Belarus and Lithuania to the east; and the Baltic Sea and Kaliningrad Oblast, a Russian exclave, to the north...
by the Russian SFSR in 1921 (55,000 printed books).
For five years after its foundation, the library was run by Comte Marie-Gabriel-Florent-Auguste de Choiseul-Gouffier
Marie-Gabriel-Florent-Auguste de Choiseul-Gouffier
Marie-Gabriel-Florent-Auguste de Choiseul-Gouffier was a member of the Académie Française and the Choiseul-Gouffier family, French ambassador to the Ottoman Empire from 1784 until the fall of the French monarchy and a scholar of ancient Greece.-Life:Right from his studies at the collège...
. The elegant main building on Nevsky Prospekt
Nevsky Prospekt
Nevsky Avenue |Prospekt]]) is the main street in the city of St. Petersburg, Russia. Planned by Peter the Great as beginning of the road to Novgorod and Moscow, the avenue runs from the Admiralty to the Moscow Railway Station and, after making a turn at Vosstaniya Square, to the Alexander...
was built in a Neoclassical
Neoclassical architecture
Neoclassical architecture was an architectural style produced by the neoclassical movement that began in the mid-18th century, manifested both in its details as a reaction against the Rococo style of naturalistic ornament, and in its architectural formulas as an outgrowth of some classicizing...
style designed by the architect Yegor Sokolov in 1796-1801. Several annexes were added in the course of the following century, notably the Gothic Hall in 1857. 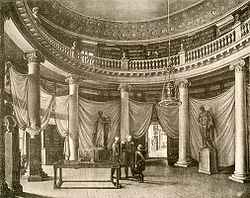 Under Count Alexander Stroganov, who managed the library during the first decade of the 19th century, the Rossica project was inaugurated, a vast collection of foreign books touching on Russia. It was Stroganov who secured for the library some of its most invaluable treasures, namely the Ostromir Gospel
Ostromir Gospel
The Ostromir Gospels is the second oldest dated East Slavic book...
, the earliest book written in Russian language
Russian language
Russian is a Slavic language used primarily in Russia, Belarus, Uzbekistan, Kazakhstan, Tajikistan and Kyrgyzstan. It is an unofficial but widely spoken language in Ukraine, Moldova, Latvia, Turkmenistan and Estonia and, to a lesser extent, the other countries that were once constituent republics...
, and the Hypatian Codex
Hypatian Codex
The Hypatian Codex is a compendium of three chronicles: the Primary Chronicle, Kiev Chronicle, and Galician-Volhynian Chronicle. It is the most important source of historical data for southern Rus'...
of the Russian Primary Chronicle.

The Imperial Public Library was officially opened on January 3, 1814 in the presence of Gavrila Derzhavin and Ivan Krylov
Ivan Krylov
Ivan Andreyevich Krylov is Russia's best known fabulist. While many of his earlier fables were loosely based on Aesop and Jean de La Fontaine, later fables were original work, often satirizing the incompetent bureaucracy that was stifling social progress in his time.-Life:Ivan Krylov was born in...
. In 1811 the library's collection began to grow rapidly, because a copy of each book published in Imperial Russia was henceforth deposited with the library, so that by 1914 the collection had expanded to 3,000,000 volumes.

The library's third, and arguably most famous, director was Aleksey Olenin (1763–1843). His 32-year tenure at the helm, with Sergey Uvarov
Sergey Uvarov
Count Sergey Semionovich Uvarov was a Russian classical scholar best remembered as an influential imperial statesman....
serving as his deputy, raised the profile of the library among Russian intellectuals. Such luminaries as Krylov, Konstantin Batyushkov
Konstantin Batyushkov
Konstantin Nikolayevich Batyushkov was a Russian poet, essayist and translator of the Romantic era.-Biography:The early years of Konstantin Batyushkov's life are difficult to reconstruct...
, Nikolay Gnedich
Nikolay Gnedich
Nikolay Ivanovich Gnedich was a Russian poet and translator best known for his idyll The Fishers...
, Anton Delvig, Mikhail Zagoskin
Mikhail Zagoskin
Mikhail Nikolayevich Zagoskin , , was a Russian writer. Author of social comedies, historical novels.Zagoskin was born in the village of Ramzay in Penza Oblast...
, Alexander Vostokov
Alexander Vostokov
Alexander Khristoforovich Vostokov was one of the first Russian philologists.He was born in Arensburg, Governorate of Livonia, and studied at the Imperial Academy of Arts. As a natural son of Baron von Osten-Sacken, he received the name Osteneck, which he later chose to render into Russian as...
, and Father Ioakinf joined the library staff and the library's doors were opened to all kinds of readers, including women and peasants.
From 1849 to 1861 the library was managed by Count Modest von Korff (1800–76), who had been Alexander Pushkin's school-fellow at the Lyceum
Lyceum
The lyceum is a category of educational institution defined within the education system of many countries, mainly in Europe. The definition varies between countries; usually it is a type of secondary school.-History:...
. Korff and his successor, Ivan Delyanov
Ivan Delyanov
Count Ivan Davidovich Delyanov was a Russian statesman of Armenian descent.Delyanov graduated from Moscow State University's Law School in 1838. In 1857 – 1897, he held a number of important governmental positions. Delyanov became a member of the State Council of Imperial Russia in 1874...
, added to the library's collections some of the earliest manuscripts of the New Testament
New Testament
The New Testament is the second major division of the Christian biblical canon, the first such division being the much longer Old Testament....
(the Codex Sinaiticus
Codex Sinaiticus
Codex Sinaiticus is one of the four great uncial codices, an ancient, handwritten copy of the Greek Bible. It is an Alexandrian text-type manuscript written in the 4th century in uncial letters on parchment. Current scholarship considers the Codex Sinaiticus to be one of the best Greek texts of...
from the 340s), the Old Testament
Old Testament
The Old Testament, of which Christians hold different views, is a Christian term for the religious writings of ancient Israel held sacred and inspired by Christians which overlaps with the 24-book canon of the Masoretic Text of Judaism...
(the so-called Leningrad Codex
Leningrad Codex
The Leningrad Codex is the oldest complete manuscript of the Hebrew Bible in Hebrew, using the masoretic text and Tiberian vocalization. It is dated AD 1008 according to its colophon...
), and one of the earlies Qur'an
Qur'an
The Quran , also transliterated Qur'an, Koran, Alcoran, Qur’ān, Coran, Kuran, and al-Qur’ān, is the central religious text of Islam, which Muslims consider the verbatim word of God . It is regarded widely as the finest piece of literature in the Arabic language...
s (the Uthman Qur'an
Uthman Qur'an
The Othman Qur'an , named for the third Caliph, Uthman ibn Affan, is a manuscript Qur'an kept in the Hast Imam library...
from the mid-7th century).

In the aftermath of the Russian Revolution, the institution was placed under the management of Ernest Radlov and Nicholas Marr, although its national preeminence was relinquished to the Lenin State Library
Russian State Library
The Russian State Library is the national library of Russia, located in Moscow. It is the largest in the country and the third largest in the world for its collection of books . It was named the V. I...
in Moscow
Moscow
Moscow is the capital, the most populous city, and the most populous federal subject of Russia. The city is a major political, economic, cultural, scientific, religious, financial, educational, and transportation centre of Russia and the continent...
. The library was awarded the Order of the Red Banner of Labour
Order of the Red Banner of Labour
The Order of the Red Banner of Labour was an order of the Soviet Union for accomplishments in labour and civil service. It is the labour counterpart of the military Order of the Red Banner. A few institutions and factories, being the pride of Soviet Union, also received the order.-History:The Red...
in 1939 and remained open during the gruesome Siege of Leningrad
Siege of Leningrad
The Siege of Leningrad, also known as the Leningrad Blockade was a prolonged military operation resulting from the failure of the German Army Group North to capture Leningrad, now known as Saint Petersburg, in the Eastern Front theatre of World War II. It started on 8 September 1941, when the last...
. In 1948, the Neoclassical campus of the Catherine Institute on the Fontanka Embankment (Giacomo Quarenghi
Giacomo Quarenghi
Giacomo Quarenghi was the foremost and most prolific practitioner of Palladian architecture in Imperial Russia, particularly in Saint Petersburg.- Career in Italy :...
, 1804–07) was assigned to the library. By 1970, the Library contained more than 17,000,000 items. The modern building for the book depository was erected on Moskovsky Prospekt
Moskovsky Prospekt
Moskovsky Prospekt is a 10 km-long prospekt in Saint Petersburg, Russia. It runs from Sennaya Square and Sadovaya Street, to the Victory Square, where it splits into Pulkovo Highway and Moscow Highway. It crosses Fontanka River, Zagorodny Prospekt, Obvodny Canal, and Ligovsky Prospekt...
in the 1980s and 1990s.