A microcar is the smallest automobile
Automobile
An automobile, autocar, motor car or car is a wheeled motor vehicle used for transporting passengers, which also carries its own engine or motor...
classification usually applied to standard small car (smaller than city car
City car
A city car is a small car intended for use primarily in an urban area.City cars are sold worldwide and most automotive industry manufacturers have one or two in their line-up. In North-America city cars are often referred to simply as "subcompacts" alongside the superminis. These kind of cars...
s). Such small cars were generally referred to as cyclecar
Cyclecar
Cyclecars were small, generally inexpensive cars manufactured mainly between 1910 and the late 1920s.-General description:Cyclecars were propelled by single cylinder, V-twin or more rarely four cylinder engines, often air cooled. Sometimes these had been originally used in motorcycles and other...
s until the 1940s. More recent models (1960 and later) are also called bubblecars due to their egg-shaped appearance.

The definition of a microcar has varied considerably in different countries. Since there are usually tax and/or licensing advantages to the classification, multiple restrictions are often imposed, starting with engine size. The Register of Unusual Microcars in the UK says: "economy vehicles with either three or four wheels, powered by petrol engines of no more than 700cc or battery electric propulsion, and manufactured since 1945". The Bruce Weiner Microcar Museum
The Bruce Weiner Microcar Museum
The Bruce Weiner Microcar Museum is a museum in Madison, Georgia, United States that holds the largest single collection of microcars in the world...
(the world's largest collection of Microcars) says "Engine sizes of 700cc and less and 2 doors or less" and the US-based Vintage Microcar Club simply defines it as 1000cc or less.

Typical microcars usually have some of the following features:

Many, but not all, microcars are also:

There are also a variety of microcar trucks, usually of the "forward control" or van style to provide more cargo room. These might be used for local deliveries on narrow streets where standard small pickup trucks would be inconvenient, and full-sized delivery trucks would be impossible.

The economy of operating such a small car (mostly in fuel and tires) has also often been helped by three-wheeled microcars or cars with very small engines being treated as motorcycle
Motorcycle
A motorcycle is a single-track, two-wheeled motor vehicle. Motorcycles vary considerably depending on the task for which they are designed, such as long distance travel, navigating congested urban traffic, cruising, sport and racing, or off-road conditions.Motorcycles are one of the most...
s for tax
Tax
To tax is to impose a financial charge or other levy upon a taxpayer by a state or the functional equivalent of a state such that failure to pay is punishable by law. Taxes are also imposed by many subnational entities...
and insurance
Insurance
In law and economics, insurance is a form of risk management primarily used to hedge against the risk of a contingent, uncertain loss. Insurance is defined as the equitable transfer of the risk of a loss, from one entity to another, in exchange for payment. An insurer is a company selling the...
purposes (quadricycle
Quadricycle
Quadricycle, quadracycle, quadcycle, quadrocycle refers to any vehicle with four wheels.More specifically the term may refer to:...
).

In some countries, microcars with a certain maximum weight are considered motorcycles and therefore no car driving licence is needed (Austria, France, Germany, Spain, Italy). This assures a certain market for elder people who do not want to or who cannot pass a car driving licence. More negatively, at least in Austria and France, such cars are sometimes derided as a solution for people who had their licence revoked because of drunk driving
Driving under the influence
Driving under the influence is the act of driving a motor vehicle with blood levels of alcohol in excess of a legal limit...
.

In some European countries, taxes used to depend on engine displacement and/or insurance on power. This has given rise to names of such cars as Citroën 2CV
Citroën 2CV
The Citroën 2CV |tax horsepower]]”) was an economy car produced by the French automaker Citroën between 1948 and 1990. It was technologically advanced and innovative, but with uncompromisingly utilitarian unconventional looks, and deceptively simple Bauhaus inspired bodywork, that belied the sheer...
and Renault 4CV
Renault 4CV
The Renault 4CV was an economy car produced by the French manufacturer Renault from August 1947-July 1961. The first French car to sell over a million units, the 4CV was ultimately superseded by the Renault Dauphine....
. This favourable treatment by governments is based on the benefits to a society of reducing use of such resources as minerals, parking space and foreign exchange, reduced noise and chemical pollution
Pollution
Pollution is the introduction of contaminants into a natural environment that causes instability, disorder, harm or discomfort to the ecosystem i.e. physical systems or living organisms. Pollution can take the form of chemical substances or energy, such as noise, heat or light...
, reduced hazard
Hazard
A hazard is a situation that poses a level of threat to life, health, property, or environment. Most hazards are dormant or potential, with only a theoretical risk of harm; however, once a hazard becomes "active", it can create an emergency situation. A hazard does not exist when it is not...
to others (they are slow vehicles) etc. Reduced global warming
Global warming
Global warming refers to the rising average temperature of Earth's atmosphere and oceans and its projected continuation. In the last 100 years, Earth's average surface temperature increased by about with about two thirds of the increase occurring over just the last three decades...
from carbon dioxide
Carbon dioxide
Carbon dioxide is a naturally occurring chemical compound composed of two oxygen atoms covalently bonded to a single carbon atom...
emission has now been added to this list.

Another advantage is the ease of parking. Some microcars can be parked perpendicular, where other cars park parallel, or be lifted by hand, like a motor scooter, to get into a tight spot. The Isetta and some others had forward entry, to facilitate perpendicular parking close to other vehicles. The Myers Motors NmG (originally called the Corbin Sparrow) is licensed as a motorcycle and parked in motorcycle spaces in California, and probably in other places.

The small size improves handling
Car handling
Automobile handling and vehicle handling are descriptions of the way wheeled vehicles perform transverse to their direction of motion, particularly during cornering and swerving. It also includes their stability when moving at rest. Handling and braking are the major components of a vehicle's...
by reducing the angular inertia. The Messerschmitt
Messerschmitt
Messerschmitt AG was a famous German aircraft manufacturing corporation named for its chief designer, Willy Messerschmitt, and known primarily for its World War II fighter aircraft, notably the Bf 109 and Me 262...
and Spatz
Spatz Kabinenroller
The Spatz later renamed the Victoria 250 is a four-wheeled microcar that was built between 1956 and 1958The car was originally conceived by Egon Brütsch as the Brütsch 200 "Spatz" a Fiberglass three-wheeler with the suspension of the front wheels and the rear wheel attached directly to the body...
have been described as much better than ordinary cars on snow and ice. Spare room on the road and ease of missing obstacles are also improved.

For the performance oriented, who prefer more than two wheels and a roof, the scaling laws
There's Plenty of Room at the Bottom
There's Plenty of Room at the Bottom is the title of a lecture given by physicist Richard Feynman at an American Physical Society meeting at Caltech on December 29, 1959...
show that one need not give up acceleration until the curb weight comes down to around the driver's weight, because power per weight of the car itself improves with small size, in an otherwise similar design. Top speed is lost with small scale, due to the decreased Reynolds number, but this is a small effect. The Messerschmitt TG500
Messerschmitt TG500
The FMR Tg500 was a sports car built by Fahrzeug- und Maschinenbau GmbH, Regensburg from 1958 to 1961. Based on the monocoque of the Messerschmitt KR200 three-wheeled car, it was a four-wheeled car with a two-stroke straight-two engine. FMR had taken over production of the KR200 from Messerschmitt...
had about a 78 mph (126 km/h) top speed
Top Speed
Top Speed is a 1930 American musical comedy film released by First National Pictures, a subsidiary of Warner Brothers.-Production:The film was completed as a full musical...
with 15 kW (20 horsepower) and excellent aerodynamics
Aerodynamics
Aerodynamics is a branch of dynamics concerned with studying the motion of air, particularly when it interacts with a moving object. Aerodynamics is a subfield of fluid dynamics and gas dynamics, with much theory shared between them. Aerodynamics is often used synonymously with gas dynamics, with...
.

In the UK before October 2000, a person who passed a motorcycle test was automatically granted a full sub-category B1 licence (lightweight car with an unladen weight of 550 kg or less, motor quadricycle, motor tricycle) as an additional entitlement with the full Category A (motorcycle) licence. Since 2000 a provisional car licence has to be requested.

The last major UK manufacturer, Reliant
Reliant
Reliant was a British car manufacturer. The company was traditionally based at Tamworth in Staffordshire, England, but in 2001 it moved to nearby Cannock. It ceased manufacturing cars shortly afterwards.-History:...
, ceased production of these vehicles in 1998. 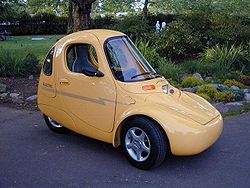 Some examples of battery electric microcars are:
The obstacle to adaptation of such vehicles in the United States is less technical than cultural and political. The mandates by regulatory powers that such vehicles meet full U.S. safety regulations ensures the unavailability of vehicles suitable for use in the mixed traffic conditions that predominate in U.S. suburban areas.

See the Kei car
Kei car
Kei cars, K-cars, or , are a Japanese category of small vehicles, including passenger cars, vans, and pickup trucks. They are designed to comply with Japanese government tax and insurance regulations, and in most rural areas are exempted from the requirement to certify that adequate parking is...
article for Kei car makers.