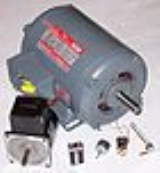 Overview
An electric motor converts electrical energy into mechanical energy
Mechanical energy
In physics, mechanical energy is the sum of potential energy and kinetic energy present in the components of a mechanical system. It is the energy associated with the motion and position of an object. The law of conservation of energy states that in an isolated system that is only subject to...
.

Most electric motor
Motor
Motor is a device that creates motion. It usually refers to an engine of some kind. It may also specifically refer to:*Electric motor, a machine that converts electricity into a mechanical motion...
s operate through the interaction of magnetic fields and current-carrying conductors
Electrical conductor
In physics and electrical engineering, a conductor is a material which contains movable electric charges. In metallic conductors such as copper or aluminum, the movable charged particles are electrons...
to generate force. The reverse process, producing electrical energy from mechanical energy, is done by generator
Electrical generator
In electricity generation, an electric generator is a device that converts mechanical energy to electrical energy. A generator forces electric charge to flow through an external electrical circuit. It is analogous to a water pump, which causes water to flow...
s such as an alternator
Alternator
An alternator is an electromechanical device that converts mechanical energy to electrical energy in the form of alternating current.Most alternators use a rotating magnetic field but linear alternators are occasionally used...
or a dynamo
Dynamo
- Engineering :* Dynamo, a magnetic device originally used as an electric generator* Dynamo theory, a theory relating to magnetic fields of celestial bodies* Solar dynamo, the physical process that generates the Sun's magnetic field- Software :...
; some electric motors can also be used as generators, for example, a traction motor
Traction motor
Traction motor refers to an electric motor providing the primary rotational torque of a machine, usually for conversion into linear motion ....
on a vehicle may perform both tasks.

I have a 3 phase 30 HP Induction motor. It draws at an average 14 or 15 Amps per phase while operating without load. Can I increase the current upto 2...

I just bought a new wood cutting Bandsaw, It's suppose to have a 5.5 hp motor but it's not listed on the motor anywhere. What I do know is that it is ...

Can someone help me smooth out a 3 hp single phase motor (baldor) it does not appear to be out obalance, it just runs rough? thanks,

I have an electric motor that will not run up to full speed. AO Smith 240v 3/4 run/start capcitor. This runs an air compressor. A connecting rod on th...

Can an electric motor be used as a generator?

Is it possible to start and stop AC induction motor 80 times a minute. If yes than How? and what is the circuit requirement. Regards, Dayanand. e...
More
x