Monboddo House is a historically famous mansion in The Mearns
Kincardineshire
The County of Kincardine, also known as Kincardineshire or The Mearns was a local government county on the coast of northeast Scotland...
, Scotland
Scotland
Scotland is a country that is part of the United Kingdom. Occupying the northern third of the island of Great Britain, it shares a border with England to the south and is bounded by the North Sea to the east, the Atlantic Ocean to the north and west, and the North Channel and Irish Sea to the...
. The structure was generally associated with the Burnett of Leys family. The property itself was owned by the Barclay
Barclay
-People:* Barclay , people with the surname Barclay* Clan BarclayFictional* Andy Barclay, the protagonist in the first three films of the Child's Play series* Reginald Barclay, character in Star Trek: The Next Generation-Business:...
family from the 13th century, at which time a tower house
Tower house
A tower house is a particular type of stone structure, built for defensive purposes as well as habitation.-History:Tower houses began to appear in the Middle Ages, especially in mountain or limited access areas, in order to command and defend strategic points with reduced forces...
structure was erected. In 1593, the Laird
Laird
A Laird is a member of the gentry and is a heritable title in Scotland. In the non-peerage table of precedence, a Laird ranks below a Baron and above an Esquire.-Etymology:...
was James Strachan
James Strachan
James F. Strachan was a Canadian ice hockey executive and businessman. He was an owner or part-owner with Montreal, Canada teams, the Montreal Wanderers and Montreal Maroons.-Hockey career:...
, and thence it passed into the Irvine
Clan Irvine
-Origins of the clan:As a surname Irvine is of territorial origins from one of two places of the same name. Firstly from Irving, an old parish in Dumfriesshire and from Irvine in Ayrshire....
family and thereafter the Burnetts of Leys. There is a notable datestone
Datestone
A datestone is typically an embedded stone with the date of engraving and other information carved into it. They are not considered a very reliable source for dating a house, as instances of old houses being destroyed and rebuilt have been reported.Specific locations have often been chosen for...
adornment on the structure with the arms
Coat of arms
A coat of arms is a unique heraldic design on a shield or escutcheon or on a surcoat or tabard used to cover and protect armour and to identify the wearer. Thus the term is often stated as "coat-armour", because it was anciently displayed on the front of a coat of cloth...
of Ervine impaling
Impalement (heraldry)
In heraldry, impalement is the combination of two coats of arms side-by-side in one shield or escutcheon to denote union, most often that of a husband and wife, but also for ecclesiastical use...
the arms of Douglas
Clan Douglas
Clan Douglas is an ancient Scottish kindred from the Scottish Lowlands taking its name from Douglas, South Lanarkshire, and thence spreading through the Scottish Borderland, Angus, Lothian and beyond. The clan does not currently have a chief, therefore it is considered an armigerous clan.The...
with initials R.E. and I.E. and dated 1635, representing the 17th century couple who reconstructed the house, Robert Ervine and Ilizabeth Ervine. Monboddo House, with its crow-stepped gable design, is situated in the Howe of Mearns near the village of Auchenblae
Auchenblae
Auchenblae is a village in the Kincardine and Mearns area of Aberdeenshire, formerly in Kincardineshire, Scotland. It is featured in Lewis Grassic Gibbon's novel, Sunset Song. The name is a derivation from the Gaelic for "Field of Flowers" possibly due to the growing of flax in bygone times. The...
approximately nine miles (14 km) from the North Sea
North Sea
In the southwest, beyond the Straits of Dover, the North Sea becomes the English Channel connecting to the Atlantic Ocean. In the east, it connects to the Baltic Sea via the Skagerrak and Kattegat, narrow straits that separate Denmark from Norway and Sweden respectively...
. The original landholding of the Monboddo Estate was approximately 200 km².

In 1714 the well known judge and philosopher James Burnett, Lord Monboddo
James Burnett, Lord Monboddo
James Burnett, Lord Monboddo was a Scottish judge, scholar of linguistic evolution, philosopher and deist. He is most famous today as a founder of modern comparative historical linguistics . In 1767 he became a judge in the Court of Session. As such, Burnett adopted an honorary title based on his...
was born in Monboddo House. Lord Monboddo is renowned for his service as a member of the Court of Session
Court of Session
The Court of Session is the supreme civil court of Scotland, and constitutes part of the College of Justice. It sits in Parliament House in Edinburgh and is both a court of first instance and a court of appeal....
, an author of several works during the Scottish Enlightenment and a precursive contributor to the theory of evolution
Evolution
Evolution is any change across successive generations in the heritable characteristics of biological populations. Evolutionary processes give rise to diversity at every level of biological organisation, including species, individual organisms and molecules such as DNA and proteins.Life on Earth...
. When he was appointed to the Court of Sessions, James Burnett took the title of his father's estate, Monboddo House. In 1773 the author Samuel Johnson
Samuel Johnson
Samuel Johnson , often referred to as Dr. Johnson, was an English author who made lasting contributions to English literature as a poet, essayist, moralist, literary critic, biographer, editor and lexicographer...
, accompanied by James Boswell
James Boswell
James Boswell, 9th Laird of Auchinleck was a lawyer, diarist, and author born in Edinburgh, Scotland; he is best known for the biography he wrote of one of his contemporaries, the English literary figure Samuel Johnson....
, visited Monboddo House to call upon James Burnett. 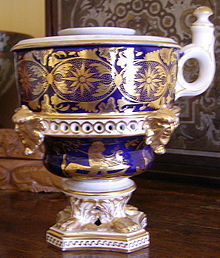 Monboddo House fell into a state of disrepair as of the 1960s; nevertheless, a number of notable features remain. Due to repairs during the latter part of the 20th century and the good maintenance of the owner as of 2006, the structure is in excellent condition. A well proportioned Hall is on the first floor (second floor in American vernacular), which has relics of early panelling. The Hall is provided with two garderobe
Garderobe
The term garderobe describes a place where clothes and other items are stored, and also a medieval toilet. In European public places, a garderobe denotes the cloakroom, wardrobe, alcove or an armoire. In Danish, Dutch, German and Spanish garderobe can mean a cloakroom. In Latvian it means checkroom...
s. While the basement has no vaulting, the westernmost basement chamber
Room
A room is any distinguishable space within a structure.Room may also refer to:* Room , by Emma Donoghue* Room, Nepal* Room for PlayStation Portable, a social networking service* Thomas Gerald Room , Australian mathematician...
is the old kitchen, containing a very large fireplace
Fireplace
A fireplace is an architectural structure to contain a fire for heating and, especially historically, for cooking. A fire is contained in a firebox or firepit; a chimney or other flue allows gas and particulate exhaust to escape...
arch.

An interior stone spiral staircase is found in an ascending clockwise manner characteristic of defensive design
Defensive design
Defensive design is the practice of planning for contingencies in the design stage of a project or undertaking. Essentially, it is the practice of anticipating all possible ways that an end-user could misuse a device, and designing the device so as to make such misuse impossible, or to minimise the...
s of towerhouses of the 14th century. Two eight centimeter diameter gun loop
Embrasure
In military architecture, an embrasure is the opening in a crenellation or battlement between the two raised solid portions or merlons, sometimes called a crenel or crenelle...
s are found within the 80 centimeter thick Old Red Sandstone
Old Red Sandstone
The Old Red Sandstone is a British rock formation of considerable importance to early paleontology. For convenience the short version of the term, 'ORS' is often used in literature on the subject.-Sedimentology:...
exterior walls (Hogan, 2006).

The front porch is extant, known for the location where Lord Monboddo would take his early morning cold water bath in the open air in the mid-18th century.

Other nearby famous noble homes in northeast Scotland built by the Burnetts of Leys are Crathes Castle
Crathes Castle
Crathes Castle is a 16th century castle near Banchory in the Aberdeenshire region of Scotland. This harled castle was built by the Burnetts of Leys and was held in that family for almost 400 years...
and Muchalls Castle
Muchalls Castle
Muchalls Castle stands overlooking the North Sea in the countryside of Kincardine and Mearns, Aberdeenshire, Scotland. The lower course is a well preserved double groined 13th century towerhouse structure, built by the Frasers of Muchalls. Upon this structure, the 17th century castle was begun by...
. There is extant considerable genealogical data concerning the Burnett of Leys family (see particularly G. Burnett, 1901 and Bailey et al., 2005).

The surrounding countryside is fertile agricultural land producing grains and providing grazing for cattle
Cattle
Cattle are the most common type of large domesticated ungulates. They are a prominent modern member of the subfamily Bovinae, are the most widespread species of the genus Bos, and are most commonly classified collectively as Bos primigenius...
. Topographically the region is composed of very gently rolling terrain quite suitable for agriculture
Agriculture
Agriculture is the cultivation of animals, plants, fungi and other life forms for food, fiber, and other products used to sustain life. Agriculture was the key implement in the rise of sedentary human civilization, whereby farming of domesticated species created food surpluses that nurtured the...
. In the 18th century the estate would have amounted to approximately 190 square kilometres. While there were numerous smaller residences on the estate from the 18th century on, in the 19th and 20th century more development has taken place closer to Monboddo House in the form of several single family residences. The estate has a peaceful setting being several kilometers from the nearest dual carriageway
Dual carriageway
A dual carriageway is a class of highway with two carriageways for traffic travelling in opposite directions separated by a central reservation...
, the A90. Sound levels were measured at the estate to be in the range of 48 to 53 dBA
A-weighting
A Weighting curve is a graph of a set of factors, that are used to 'weight' measured values of a variable according to their importance in relation to some outcome. The most commonly known example is frequency weighting in sound level measurement where a specific set of weighting curves known as A,...
.

In 1930 a postcard of Monboddo House was created by G. Arthur Dixon. After Burnett ownership ceased in the early 1960s the estate fell into disrepair, a situation that has been reversed. As of 2006 the home is in a good state of conservation and repair. The present 2006 owner reports that there is considerable current interest in the house from people around the world with an interest in Lord Monboddo; particular interest derives not only from researchers in the United Kingdom but also Japan
Japan
Japan is an island nation in East Asia. Located in the Pacific Ocean, it lies to the east of the Sea of Japan, China, North Korea, South Korea and Russia, stretching from the Sea of Okhotsk in the north to the East China Sea and Taiwan in the south...
and the USA. Monboddo House is less frequently referred to as Monboddo Castle.
The source of this article is wikipedia, the free encyclopedia.  The text of this article is licensed under the GFDL.