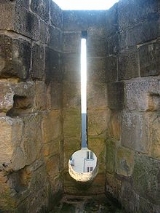 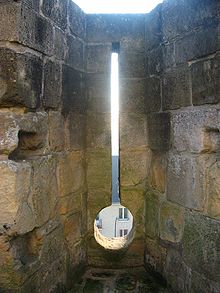 In military architecture, an embrasure is the opening in a crenellation or battlement
Battlement
A battlement in defensive architecture, such as that of city walls or castles, comprises a parapet , in which portions have been cut out at intervals to allow the discharge of arrows or other missiles. These cut-out portions form crenels...
between the two raised solid portions or merlon
Merlon
In architecture, a merlon forms the solid part of an embattled parapet, sometimes pierced by embrasures. The space between two merlons is usually called a crenel, although those later designed and used for cannons were called embrasures.-Etymology:...
s, sometimes called a crenel or crenelle. In domestic architecture this refers to the outward splay of a window or arrow slit on the inside.

A loophole, arrow loop or arrow slit passes through a solid wall and was originally for use by archers
Bow (weapon)
The bow and arrow is a projectile weapon system that predates recorded history and is common to most cultures.-Description:A bow is a flexible arc that shoots aerodynamic projectiles by means of elastic energy. Essentially, the bow is a form of spring powered by a string or cord...
. The purpose of embrasures is to allow weapons to be fired out from the fortification while the firer remains under cover. The splay of the wall on the inside provides room for the soldier and his equipment, and allows them to get as close to the wall face and arrow slit itself as possible. Excellent examples of deep embrasures with arrow slits are to be seen at Aigues-Mortes
Aigues-Mortes
Aigues-Mortes is a commune in the Gard department in southern France.The medieval city walls surrounding the city are well preserved.-History:...
and Château de Coucy
Château de Coucy
The Château de Coucy is a French castle in the commune of Coucy-le-Château-Auffrique, in the département of Aisne, built in the 13th century and renovated by Viollet-le-Duc in the 19th...
, both in France.

The etymology of embrasure expresses "widening".

By the 19th century, a distinction was made between embrasures being used for cannon
Cannon
A cannon is any piece of artillery that uses gunpowder or other usually explosive-based propellents to launch a projectile. Cannon vary in caliber, range, mobility, rate of fire, angle of fire, and firepower; different forms of cannon combine and balance these attributes in varying degrees,...
, and loopholes being used for musket
Musket
A musket is a muzzle-loaded, smooth bore long gun, fired from the shoulder. Muskets were designed for use by infantry. A soldier armed with a musket had the designation musketman or musketeer....
ry. In both cases, the opening was normally made wider on the inside of the wall than the outside. The outside was made as narrow as possible (slightly wider than the muzzle of the weapon intended to use it) so as to afford the most difficult possible shot to attackers firing back, but the inside had to be wider in order to enable the weapon to be swiveled around so as to aim over a reasonably large arc.

A distinction was made between vertical and horizontal embrasures or loopholes, depending on the orientation of the slit formed in the outside wall. Vertical loopholes—which are much more common—allow the weapon to be easily raised and lowered in elevation
Elevation (ballistics)
In ballistics, the elevation is the angle between the horizontal plane and the direction of the barrel of a gun, mortar or heavy artillery. Originally, elevation was a linear measure of how high the gunners had to physically lift the muzzle of a gun up from the gun carriage to hit targets at a...
so as to cover a variety of ranges easily. However to sweep from side to side the weapon (and its firer or crew) must bodily move from side to side to pivot around the muzzle, which is effectively fixed by the slit. Horizontal loopholes, on the other hand, facilitate quick sweeping across the arc in front, but make large adjustments in elevation very difficult. They were usually used in circumstances where the range was very restricted anyway, or where rapid cover of a wide field of arc was preferred.

Another variation had both horizontal and vertical slits arranged in the form of a cross, and was called a crosslet loop or an arbalestina since it was principally intended for arbalest
Arbalest
The arbalest was a late variation of the medieval European crossbow. A large weapon, the arbalest had a steel prod . Since an arbalest was much larger than earlier crossbows, and because of the greater compressive strength of steel, it had a greater force...
iers (crossbowmen). In the sixteenth and seventeenth centuries, after the crossbow had become obsolete as a military weapon, crosslet loopholes were still sometimes created as a decorative architectural feature with a Christian symbolism
Christian symbolism
Christian symbolism invests objects or actions with an inner meaning expressing Christian ideas. Christianity has borrowed from the common stock of significant symbols known to most periods and to all regions of the world. Religious symbolism is effective when it appeals to both the intellect and...
.

In more modern contexts, an embrasure may be a feature of a hardened field fortification. A common feature is the stepped embrasure which is a precaution against projectiles richocheting into the opening.
The source of this article is wikipedia, the free encyclopedia.  The text of this article is licensed under the GFDL.