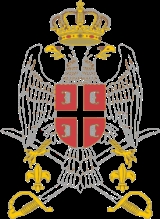 Encyclopedia
The Serbian Armed Forces are the armed services
Armed forces
The armed forces of a country are its government-sponsored defense, fighting forces, and organizations. They exist to further the foreign and domestic policies of their governing body, and to defend that body and the nation it represents from external aggressors. In some countries paramilitary...
of Serbia
Serbia
Serbia , officially the Republic of Serbia , is a landlocked country located at the crossroads of Central and Southeast Europe, covering the southern part of the Carpathian basin and the central part of the Balkans...
. They consist of the Serbian Army
Serbian Army
-Objectives:The Serbian Army is responsible for:* deterring armed threats* defending Serbia's territory* participation in peacekeeping operations* providing humanitarian aid and disaster relief-Personnel:...
(includes River Flotilla
River Flotilla of the Serbian Armed Forces
The Serbian River flotilla is the specific unit of the Serbian Land Forces with the task of keeping and optimum operational regime of sailing and of protection of Serbian interests in interior sailing corridors, which consists of rivers and canals with a total length of 1,626 km...
on the Danube
Danube
The Danube is a river in the Central Europe and the Europe's second longest river after the Volga. It is classified as an international waterway....
) and the Serbian Air Force and Air Defence. The armed forces are entirely professional and volunteer based.

The first military formation in Serbia dates over 1,500 years ago when Vlastimir of Serbia formed the first medieval Serbian state of Raška
Raška (state)
Principality of Serbia or Serbian Principality was an early medieval state of the Serbs ruled by the Vlastimirović dynasty, that existed from ca 768 to 969 in Southeastern Europe. It was established through an unification of several provincial chiefs under the supreme rule of a certain Višeslav,...
in the seventh century. Over the following centuries it would evolve into the Serbian Empire
Serbian Empire
The Serbian Empire was a short-lived medieval empire in the Balkans that emerged from the Serbian Kingdom. Stephen Uroš IV Dušan was crowned Emperor of Serbs and Greeks on 16 April, 1346, a title signifying a successorship to the Eastern Roman Empire...
, one of the largest states in Europe
Europe
Europe is, by convention, one of the world's seven continents. Comprising the westernmost peninsula of Eurasia, Europe is generally 'divided' from Asia to its east by the watershed divides of the Ural and Caucasus Mountains, the Ural River, the Caspian and Black Seas, and the waterways connecting...
at the time.

Moravian Serbia was governed by Stefan Lazarević
Stefan Lazarevic
Stefan Lazarević known also as Stevan the Tall was a Serbian Despot, ruler of the Serbian Despotate between 1389 and 1427. He was the son and heir to Prince Lazar, who died at the Battle of Kosovo against the Turks in 1389, and Princess Milica from the subordinate branch of the Nemanjić dynasty...
who introduced modern military tactics and firearms to his army however the new technology failed to defeat the superior numbers of the Ottoman Empire
Ottoman Empire
The Ottoman EmpireIt was usually referred to as the "Ottoman Empire", the "Turkish Empire", the "Ottoman Caliphate" or more commonly "Turkey" by its contemporaries...
. The Ottomans had suppressed the formation of a Serbian state along with its military from 1540 until 1804, the year of the first Serbian uprising.

The 1804 Serbian Revolution
Serbian revolution
Serbian revolution or Revolutionary Serbia refers to the national and social revolution of the Serbian people taking place between 1804 and 1835, during which this territory evolved from an Ottoman province into a constitutional monarchy and a modern nation-state...
, started with a Serbian rebellion
First Serbian Uprising
The First Serbian Uprising was the first stage of the Serbian Revolution , the successful wars of independence that lasted for 9 years and approximately 9 months , during which Serbia perceived itself as an independent state for the first time after more than three centuries of Ottoman rule and...
against the Ottoman occupation of Serbia. The victories in the battles of Ivankovac
Battle of Ivankovac
The Battle of Ivankovac was the first full-scale confrontation between the Serbian rebels and the official forces of the Ottoman Empire, during the First Serbian Uprising...
, Misar
Battle of Misar
The Battle of Mišar took place from 12 to 15 August 1806, with a Serbian victory over the Ottomans. Much of the Ottoman commanding core was killed during the battle....
, Deligrad
Battle of Deligrad
The Battle of Deligrad was fought between Serbia and the Ottoman Empire in 1806.-The battle:The First Serbian Uprising had begun in 1804 with the expulsion of the ruling janissary elite and the proclamation of an independent Serbian state by the revolution's leader, Karageorge. The Ottoman Sultan,...
and Belgrade led to the establishment of Principality of Serbia in 1817. The subsequent Second Serbian Revolution
Second Serbian Uprising
The Second Serbian Uprising was a second phase of the Serbian revolution against the Ottoman Empire, which erupted shortly after the re-annexation of the country to the Ottoman Empire, in 1813. The occupation was enforced following the defeat of the First Serbian Uprising , during which Serbia...
led to full recognition of Serbian independence, establishment of the Kingdom of Serbia
Kingdom of Serbia
The Kingdom of Serbia was created when Prince Milan Obrenović, ruler of the Principality of Serbia, was crowned King in 1882. The Principality of Serbia was ruled by the Karađorđevic dynasty from 1817 onwards . The Principality, suzerain to the Porte, had expelled all Ottoman troops by 1867, de...
and weakened the Ottoman dominance in the Balkans
Balkans
The Balkans is a geopolitical and cultural region of southeastern Europe...
.

Serbia's independence and growing influence threatened neighboring Austria-Hungary
Austria-Hungary
Austria-Hungary , more formally known as the Kingdoms and Lands Represented in the Imperial Council and the Lands of the Holy Hungarian Crown of Saint Stephen, was a constitutional monarchic union between the crowns of the Austrian Empire and the Kingdom of Hungary in...
which lead to the Bosnian crisis
Bosnian crisis
The Bosnian Crisis of 1908–1909, also known as the Annexation crisis, or the First Balkan Crisis, erupted into public view when on 6 October 1908, Austria-Hungary announced the annexation of Bosnia and Herzegovina. Russia, the Ottoman Empire, Britain, Italy, Serbia, Montenegro, Germany and France...
of 1908-1909. Consequently, since 1901, all Serbian males between the ages of 21 to 46 were liable for general mobilization. In 1914, Austria-Hungary declared war
Serbian Campaign (World War I)
The Serbian Campaign was fought from late July 1914, when Austria-Hungary invaded Serbia at the outset of the First World War, until late 1915, when the Macedonian Front was formed...
on Serbia, following the assassination of Archduke Franz Ferdinand of Austria, marking the start of the First World War
World War I
World War I , which was predominantly called the World War or the Great War from its occurrence until 1939, and the First World War or World War I thereafter, was a major war centred in Europe that began on 28 July 1914 and lasted until 11 November 1918...
. Serbia repelled 3 consecutive invasions by Austria, winning the first major victories of the war for the Allies
Allies of World War I
The Entente Powers were the countries at war with the Central Powers during World War I. The members of the Triple Entente were the United Kingdom, France, and the Russian Empire; Italy entered the war on their side in 1915...
, but was eventually overwhelmed by the combined forces of the Central Powers
Central Powers
The Central Powers were one of the two warring factions in World War I , composed of the German Empire, the Austro-Hungarian Empire, the Ottoman Empire, and the Kingdom of Bulgaria...
.

Serbia follows the doctrine of armed neutrality
Armed neutrality
Armed neutrality, in international politics, is the posture of a state or group of states which makes no alliance with either side in a war, but asserts that it will defend itself against resulting incursions from all parties....
, but does take part in some United Nations peacekeeping missions. This military doctrine
Military doctrine
Military doctrine is the concise expression of how military forces contribute to campaigns, major operations, battles, and engagements.It is a guide to action, not hard and fast rules. Doctrine provides a common frame of reference across the military...
is similar to that of Sweden
Swedish neutrality
Swedish neutrality refers to Sweden's policy of neutrality in armed conflicts, which has been in effect since the early 19th century. The policy originated largely as a result of Sweden's involvement in the Napoleonic Wars during which over a third of the country's territory was lost, including the...
. The neutrality doctrine has obligated Serbia to remain militarily neutral during peacetime or in the event of a war. By its constitution
Constitution of Serbia
The Constitution of the Republic of Serbia is Serbia's fundamental law. The current constitution was approved in a constitutional referendum, held from on 28–29 October 2006...
, Serbia must not enter a war as an aggressor on a sovereign state or a defender of another country. The use of its military is limited to an attack on Serbia's sovereignty. Serbia also practices the doctrine of civilian control of the military, vesting responsibility of the military in the citizens.

Serbia's current defence spending stands at 2.08% of the GDP
Gross domestic product
Gross domestic product refers to the market value of all final goods and services produced within a country in a given period. GDP per capita is often considered an indicator of a country's standard of living....
, this represents a drop in overall relation to the GDP as a percentage. Over 30% of the budget is spent on pensions alone. The continuing drive to modernize the military will add onto costs in the future. To promote efficient use of funds, the Strategic Defense Review has helped eliminate redundant services, withdrawal of outdated equipment, increase maneuverability and decrease response time. The number of active personnel has been significantly reduced from pre-2004 levels. As of 2011, over 90% of the armed forces are composed of professional soldiers and volunteers.

The Serbian Armed Forces currently take part in five United Nations
United Nations
The United Nations is an international organization whose stated aims are facilitating cooperation in international law, international security, economic development, social progress, human rights, and achievement of world peace...
peacekeeping
Peacekeeping
Peacekeeping is an activity that aims to create the conditions for lasting peace. It is distinguished from both peacebuilding and peacemaking....
missions. The Serbian Medical Corps, has participated in the Congo
Democratic Republic of the Congo
The Democratic Republic of the Congo is a state located in Central Africa. It is the second largest country in Africa by area and the eleventh largest in the world...
since March 2003.