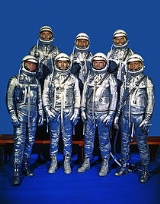 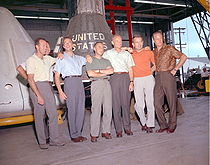 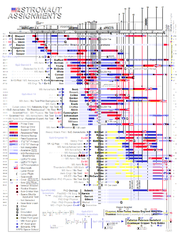 As of 2011, John Glenn
John Glenn
John Herschel Glenn, Jr. is a former United States Marine Corps pilot, astronaut, and United States senator who was the first American to orbit the Earth and the third American in space. Glenn was a Marine Corps fighter pilot before joining NASA's Mercury program as a member of NASA's original...
and Scott Carpenter
Scott Carpenter
Malcolm Scott Carpenter is an American engineer, former test pilot, astronaut, and aquanaut. He is best known as one of the original seven astronauts selected for NASA's Project Mercury in April 1959....
are the only surviving members of the Mercury Seven.

Although NASA planned an open competition for its first astronauts, President Dwight D. Eisenhower
Dwight D. Eisenhower
Dwight David "Ike" Eisenhower was the 34th President of the United States, from 1953 until 1961. He was a five-star general in the United States Army...
insisted that all candidates be test pilots, which excluded women. Because of the small space inside the Mercury spacecraft, candidates could be no taller than 5 feet 11 inches (180 cm) and weigh no more than 180 pounds (82 kg). Other requirements included an age under 40, a bachelor's degree or equivalent, 1,500 hours of flying time, and qualification to fly jets.

After an advertisement among military test pilots drew more than 500 applications, NASA searched military personnel records in January 1959 and identified 110 pilots—five Marines, 47 from the Navy, and 58 from the Air Force—who qualified. Sixty-nine candidates were brought to Washington, DC, in two groups; the candidates' interest was so great, despite the extensive physical and mental exams from January to March, that the agency did not summon the last group. The tests included spending hours on treadmill
Treadmill
A treadmill is an exercise machine for running or walking while staying in one place. The word treadmill traditionally refers to a type of mill which was operated by a person or animal treading steps of a wheel to grind grain...
s and tilt tables, submerging their feet in ice water, three doses of castor oil, and five enema
Enema
An enema is the procedure of introducing liquids into the rectum and colon via the anus. The increasing volume of the liquid causes rapid expansion of the lower intestinal tract, often resulting in very uncomfortable bloating, cramping, powerful peristalsis, a feeling of extreme urgency and...
s. Six candidates were rejected as too tall for the planned spacecraft. Another 33 failed or dropped out during the first phase of exams. Four more refused to take part in the second round of tests, which eliminated eight more candidates, leaving 18.

From the 18, the first seven NASA astronauts were chosen, each a "superb physical specimen" with a genius-level IQ, and the ability to function well both as part of a team and solo. Despite the extensive medical evaluation, two of the seven (Shepard and Slayton) were soon grounded for undiagnosed medical conditions and sat out the entirety of Project Gemini and most of the Apollo program (and Mercury as well, in Slayton's case) supervising the active astronauts.

NASA introduced the astronauts in Washington on 10 April 1959. Although the agency viewed Project Mercury's purpose as an experiment to determine whether humans could survive space travel, the seven men immediately became national heroes compared to "Columbus
Christopher Columbus
Christopher Columbus was an explorer, colonizer, and navigator, born in the Republic of Genoa, in northwestern Italy. Under the auspices of the Catholic Monarchs of Spain, he completed four voyages across the Atlantic Ocean that led to general European awareness of the American continents in the...
, Magellan
Ferdinand Magellan
Ferdinand Magellan was a Portuguese explorer. He was born in Sabrosa, in northern Portugal, and served King Charles I of Spain in search of a westward route to the "Spice Islands" ....
, Daniel Boone
Daniel Boone
Daniel Boone was an American pioneer, explorer, and frontiersman whose frontier exploits mad']'e him one of the first folk heroes of the United States. Boone is most famous for his exploration and settlement of what is now the Commonwealth of Kentucky, which was then beyond the western borders of...
, and the Wright brothers
Wright brothers
The Wright brothers, Orville and Wilbur , were two Americans credited with inventing and building the world's first successful airplane and making the first controlled, powered and sustained heavier-than-air human flight, on December 17, 1903...
." 200 reporters overflowed the room used for the announcement and alarmed the astronauts, who were unused to such a large audience.

Because they wore civilian clothes, the audience did not see them as military test pilots but "mature, middle-class Americans, average in height and visage, family men all", ready for single combat
Single combat
Single combat is a fight between two single warriors which takes place in the context of a battle between two armies, with the two often considered the champions of their respective sides...
versus worldwide Communism. To the astronauts' surprise, the reporters asked about their personal lives instead of war records or flight experience, or about the details of Mercury. After Glenn responded by speaking eloquently "on God, country, and family" the others followed his example, and the reporters "lustily applauded them."

The astronauts participated in Project Mercury's design and planning. While busy with such duties and the intense training for their flights, the men also "roughhoused and drank and drove fast and got into sexual peccadilloes", likely due to the dangerous nature of their work. NASA actively sought to protect the astronauts and the agency from negative publicity and maintain an image of "clean-cut, all-American boy[s]".

The seven astronauts agreed to share equally any proceeds from interviews regardless of who flew first. In August 1959, they and their wives signed a contract with Life magazine
Life (magazine)
Life generally refers to three American magazines:*A humor and general interest magazine published from 1883 to 1936. Time founder Henry Luce bought the magazine in 1936 solely so that he could acquire the rights to its name....
for $500,000 in exchange for exclusive access to their private lives, homes, and families. They wrote first-hand accounts of their selection and preparation for the Mercury missions in the 1962 book We Seven. Additionally, each of them separately wrote at least one book describing their astronaut experiences. In 1979, Tom Wolfe
Tom Wolfe
Thomas Kennerly "Tom" Wolfe, Jr. is a best-selling American author and journalist. He is one of the founders of the New Journalism movement of the 1960s and 1970s.-Early life and education:...
published a less sanitized version of their story in The Right Stuff
The Right Stuff (book)
The Right Stuff is a 1979 book by Tom Wolfe about the pilots engaged in U.S. postwar experiments with experimental rocket-powered, high-speed aircraft as well as documenting the stories of the first Project Mercury astronauts selected for the NASA space program...
. Wolfe's book was the basis for the popular film of the same name directed by Philip Kaufman
Philip Kaufman
Philip Kaufman is an American film director and screenwriter. His movies have adapted novels of widely different types – from Milan Kundera’s The Unbearable Lightness of Being to Michael Crichton’s Rising Sun; from Tom Wolfe’s heroic epic The Right Stuff to the erotic writings of Anaïs Nin’s...
.

Their official spokesman from 1959-1963 was USAF Lt. Col. John "Shorty" Powers
John A. Powers
John Anthony Powers , better known as Shorty Powers, was an American public affairs officer for NASA from 1959 to 1963 during Project Mercury...
, who as a result became known in the press as the "eighth astronaut".

In the 1960s TV series Thunderbirds
Thunderbirds (TV series)
Thunderbirds is a British mid-1960s science fiction television show devised by Gerry and Sylvia Anderson and made by AP Films using a form of marionette puppetry dubbed "Supermarionation"...
, the Tracy brothers were given the forenames of five of the Mercury astronauts: Scott, Virgil, Alan, Gordon and John.

MR-3 (Freedom 7)
Mercury-Redstone 3
Mercury-Redstone 3 was the first manned space mission of the United States. Astronaut Alan Shepard piloted a 15-minute Project Mercury suborbital flight in the Freedom 7 spacecraft on May 5, 1961 to become the first American in space, three weeks after the Soviet cosmonaut Yuri Gagarin had carried...
, Apollo 14
Apollo 14
Apollo 14 was the eighth manned mission in the American Apollo program, and the third to land on the Moon. It was the last of the "H missions", targeted landings with two-day stays on the Moon with two lunar EVAs, or moonwalks....
MR-4 (Liberty Bell 7)
Mercury-Redstone 4
Mercury-Redstone 4 was the second United States manned space mission, launched on July 21, 1961. The Mercury program suborbital flight used a Redstone rocket. The spacecraft was named Liberty Bell 7 piloted by astronaut Virgil I. "Gus" Grissom. It reached an altitude of more than 118.26 mi ...
, Gemini 3
Gemini 3
Gemini 3 was the first manned mission in NASA's Gemini program, the second American manned space program. On March 23, 1965, the spacecraft, nicknamed The Molly Brown, performed the seventh manned US spaceflight, and the 17th manned spaceflight overall...
, Apollo 1
Apollo 1
Apollo 1 was scheduled to be the first manned mission of the Apollo manned lunar landing program, with a target launch date of February 21, 1967. A cabin fire during a launch pad test on January 27 at Launch Pad 34 at Cape Canaveral killed all three crew members: Command Pilot Virgil "Gus"...
MA-6 (Friendship 7)
Mercury-Atlas 6
Mercury-Atlas 6 was a human spaceflight mission conducted by NASA, the space agency of the United States. As part of Project Mercury, MA-6 was the successful first attempt by NASA to place an astronaut into orbit. The MA-6 mission was launched February 20, 1962. It made three orbits of the Earth,...
, STS-95
STS-95
STS-95 was a Space Shuttle Discovery mission launched from Kennedy Space Center, Florida on 29 October 1998. It was the 25th flight of Discovery and the 92nd mission flown since the start of the Space Shuttle program in April 1981. It was a highly publicized mission due to former Project Mercury...
MA-7 (Aurora 7)
Mercury-Atlas 7
-Backup crew:-Crew notes:The original prime crew for Mercury Atlas-7 was to have been Deke Slayton, with Schirra as his back-up. However Slayton was removed from all flight crew availability after the discovery of cardiac arrhythmia during a training run in the g-loading centrifuge...
MA-8 (Sigma 7)
Mercury-Atlas 8
Mercury-Atlas 8 was an early manned space mission, part of NASA's Mercury program. Astronaut Walter M. Schirra, Jr., orbited the Earth six times in the Sigma 7 spacecraft on October 3, 1962, in a nine-hour flight focused mainly on technical evaluation rather than on scientific experimentation...
, Gemini 6A
Gemini 6A
-Backup crew:-Mission parameters:* Mass: * Perigee: * Apogee: * Inclination: 28.97°* Period: 88.7 min-Stationkeeping with GT-7:* Start: December 15, 1965 19:33 UTC* End: December 16, 1965 00:52 UTC-Objectives:...
, Apollo 7
Apollo 7
Apollo 7 was the first manned mission in the American Apollo space program, and the first manned US space flight after a cabin fire killed the crew of what was to have been the first manned mission, AS-204 , during a launch pad test in 1967...
MA-9 (Faith 7)
Mercury-Atlas 9
Mercury-Atlas 9 was the final manned space mission of the U.S. Mercury program, launched on May 15, 1963 from Launch Complex 14 at Cape Canaveral, Florida. The spacecraft, named Faith 7, completed 22 Earth orbits before splashing down in the Pacific Ocean, piloted by astronaut Gordon Cooper, then...
, Gemini 5
Gemini 5
Gemini 5 was a 1965 manned spaceflight in NASA's Gemini program. It was the third manned Gemini flight, the 11th manned American flight and the 19th spaceflight of all time...
Apollo-Soyuz Test Project
Apollo-Soyuz Test Project
-Backup crew:-Crew notes:Jack Swigert had originally been assigned as the command module pilot for the ASTP prime crew, but prior to the official announcement he was removed as punishment for his involvement in the Apollo 15 postage stamp scandal.-Soyuz crew:...